Sundance Review: Is the Hilarious 'Computer Chess' a Change of Pace for Andrew Bujalski? 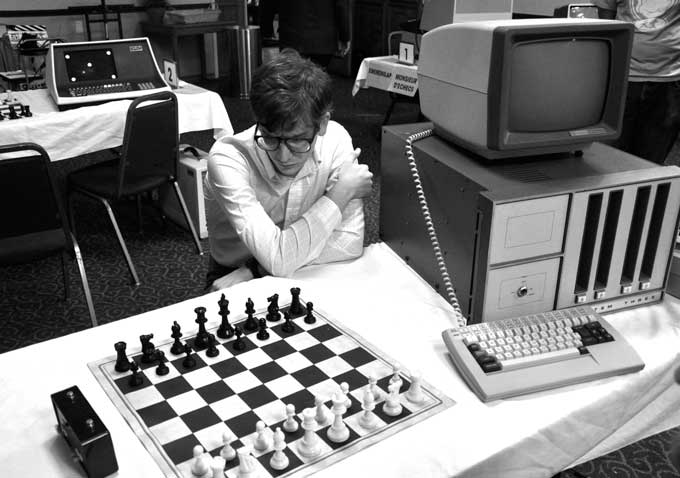 There is an immediate sense of change afoot in “Computer Chess,” Andrew Bujalski’s fourth feature as writer-director, visible to anyone familiar with his previous work. While Bujalski’s influential “Funny Ha Ha” — along with follow-ups “Mutual Appreciation” and “Beeswax” — were almost defiantly shot on 16mm film and focused on the interpersonal relationships of chic young adults, “Computer Chess” is a period piece set 30 years in the past and shot on low-grade analog video. Experientially, however, “Computer Chess” falls in line with its precedents while achieving much funnier, offbeat results.

Focused on a group of proto-computer nerds involved in a tournament to devise first-rate chess software for their clunky machines, the movie relishes the awkward expressions of brilliance from its introverted leads. A savvy ensemble piece set over the course of a weekend-long hotel conference, “Computer Chess” echoes Bujalski’s preceding efforts by investigating the pratfalls of miscommunication in continuing deadpan fashion. The shift in this case involves taking that idea to its logical, hilarious extreme of man versus machine.

Appropriately set in the early ’80s (shortly before 1984, to fit its technophobic theme), “Computer Chess” takes place at a conference in which nearly everyone believes the future has arrived in the form of the unwieldy processors students lug into the hotel. Viewed in a 21st-century context, this continuing assertion takes on absurdist dimensions, but Bujalski’s characteristic knack for dialogue quickly disabuses the material of any heavy satiric intentions. Instead, with an opening panel discussion headed by professor and chess champ Pat Henderson (film critic Gerald Peary, exuding an amusing blend of sheepishness and consternation), the movie neatly establishes its world and stays in it until the very end.

Henderson, moderating a quirky discussion about whether or not the strongest computer at the event can defeat him in a game, eventually loses control of the talk as the dyspeptic Michael Papageorge (Myles Paige) decries his fellow panelists for denying the obvious: “It’s only a matter of time before we beat people with these things,” he says. But the ensuing, scattershot collection of geeky spats and relationships gone wrong suggests that that prophecy has already come true.

Over the course of the long weekend, Bujalski’s camera wanders the halls of the hotel, picking up on a variety of overlapping circumstances less pertaining to computers or chess than to the impact of fixating so heavily on both of them at the expense of relating to the rest of the world. Yet Bujalski doesn’t denigrate this niche community; off-putting at first, “Computer Chess” grows on you as its subjects develop into delicate, flustered three-dimensional creations incapable of reconciling their interests with society at large, yielding a sympathetic portrait more reminiscent of early Kevin Smith protagonists than the “Revenge of the Nerds” franchise.

While Pappageorge wanders the labyrinthine hotel sans room in a dazed attempt to rest his head, “Computer Chess” launches into a chaotic series of fragmented discussions as the tournament gets underway. Henderson takes on the comic role of emcee for the event, as various students’ computers pair off against each other in a running attempt to highlight the strongest software.

There’s a continuing irony to the slow-burn methodology of playing each game, with students forced to manually enter their computers’ moves, a painstaking process that mimics the continuing inelegance of their interactions. Among the various mini-characterizations populating vignettes in this cleverly fragmented plot, the supremely reserved Peter Bishop (Patrick Riester) stands out: A typical Bujalski hero, he demonstrates innate programming brilliance during a late night brainstorming session but continually fails to express his romantic interest in the equally reclusive Shelly (Robin Schwartz), the sole female competitor in the conference. His incapacity to fully express himself reaches wickedly unnerving heights when an older couple staying in the hotel attempts to rope him into a threesome.

It’s hard to keep track of all the moving parts in “Computer Chess,” some of which work better than others. A hippy meditation group meeting at the hotel at the same time as the conference repeatedly intersects with the exploits of various tournament participants, providing an effective contrast between two extremes of self-expression. But a curious tangent in which Pappageorge leaves the hotel with another student and the movie briefly turns to color fails to mesh with the rest of the narrative through-line.

Whenever it stars to wander, however, “Computer Chess” snaps back into focus with Bujalski’s typically assertive capacity to script naturalistic dialogue. That the cast is predominantly composed of amateur performers making their onscreen debuts makes this feat especially remarkable: The movie is erratic and weird but still totally believable in its snapshot of vaguely autistic, hyper-obsessive personalities unable to see beyond the framing devices of their discipline. One character’s dream sequence actually envisions the entire cast as chess pieces, and the few moments of straightforward socializing inevitably turn to work. “Chess is not war,” says one student, passing a joint around in the hotel’s seemingly coolest room, where another resident pontificates, “Is real artificial intelligence different from artificial real intelligence?”

Bujalski doesn’t have the answer to that one, nor does he attempt to address it. “Computer Chess” excels at conveying the frustrations of feeling trapped by forces beyond one’s control, the complexities of humanity irresolvable by any neat code. Aided by cinematographer Matthias Grunsky’s grungy imagery, displayed in the constraints of a 4:3 aspect ration, the movie delivers its witty thesis in claustrophobic terms foreshadowed by a line sarcastically mentioned early on: “A machine can’t compete against the human soul.” But with the unexpectedly surreal final gag and several unresolved dramas, that proposition remains far from certain.

HOW WILL IT PLAY? While commercial prospects are tough, the unique setting and interest in Bujalski’s work could propel it to solid returns in ancillary markets. A conventional theatrical release might be tough, but it has enough cult appeal to open up the possibility of an inventive distribution strategy.

This Article is related to: Reviews and tagged Andrew Bujalski, Computer Chess, Reviews