The 2013 Oscars: Torn Between Self-Seriousness and Wanting to See Boobs 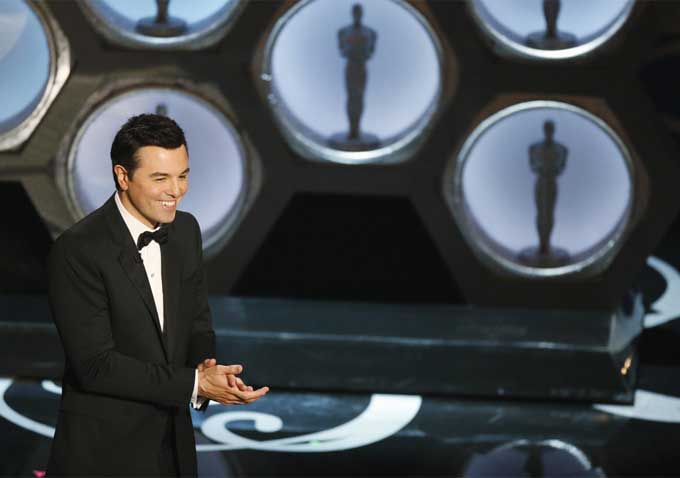 The Academy Awards are not, as we were reminded several times during last night’s telecast, a reflection of the films that are most successful by the measure of the box office. None of the best picture nominees were among the top ten money-making titles of the year, though a few were in the top 20. The massive blockbusters of Hollywood, with their superheroes, talking animals and young adult fiction adaptations, may get the popular vote, but they’re not what the industry is looking to celebrate itself for on its special night. Nor do the Oscars match up with the critic and cinephile picks — “Holy Motors” won Indiewire’s annual year-end critics’ poll, while “The Master” topped that of the Village Voice, two unconcernedly uncommercial films that weren’t even up for the big prize. 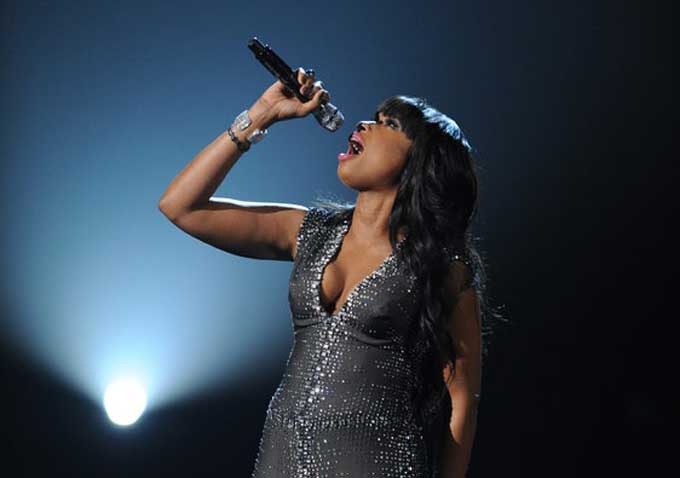 No, the Oscars are all about how Hollywood sees itself, with the sparkle and glamour and joshing between famous friends. But Hollywood also wants and needs people to actually tune in to watch this giant 210+ minute affair, which is how we ended up with the whiplash combination of a ceremony themed, throwback style, around a celebration of movie musicals, but hosted by “Family Guy” creator Seth MacFarlane. Here, have some razzle-dazzle dance numbers, and also some jokes about boobs! Everyone can get a turn to be bored and offended.

The mess wasn’t entirely MacFarlane’s fault, though his stint fell so flat that when Ben Affleck came up to present an award, the actor/director made a wince-inducing crack about how maybe the host could still turn things around. MacFarlane’s fratty humor relies on rapid churn, shock value and committed juvenilia, which made it a particularly odd fit for the event. That live recreation of the type of random cutaway gag he uses in his animated shows, involving a nod to “The Sound of Music” ahead of the introduction of Christopher Plummer, was the only solid laugh he received. Otherwise, made to operate at the pace of an award show and defanged just enough that his jabs were dragged out of the “everyone’s a target” range and into the “you actually mean that, don’t you?” one, MacFarlane felt like the visiting creepy uncle who interrupts Thanksgiving dinner to tell obnoxious ethnic jokes no one finds funny, then spends the rest of the night hitting on his niece’s high school-aged friend. 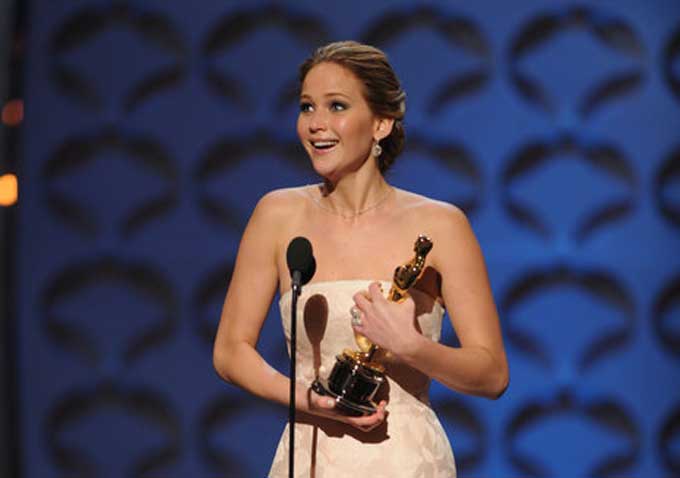 Part of the problem was that MacFarlane didn’t feel like part of this world. Rather than come across as an insider comfortably jesting with colleagues, he seemed like someone who’d be more in his element snarking about the proceedings on Twitter alongside everyone else at home. Why else would someone ever think it a good idea to close out the ceremony singing a song dedicated to (and including specific nods to) the Oscar losers? Kristin Chenoweth, a showbiz pro through-and-through, smiled like a champ at his side as the pair stumbled through that final number, but it was hard not to think that the reason the producers weren’t showing the reactions of people in the audience was that they were all already filing out on their way to the party.

MacFarlane’s shtick involved a lot of meta-commentary on his being a host, from William Shatner’s appearance as a time traveler sent to prevent him from tanking to the way he couched a creaky joke about facial hair on the Kardashians with a comment about how he thought they’d cut that line. It felt like a preemptive deflection of criticism that, as the show rolled on, became clear would be well-earned — but predicting people won’t take to what you’re doing isn’t the same as or the next best thing to actually making it all work. 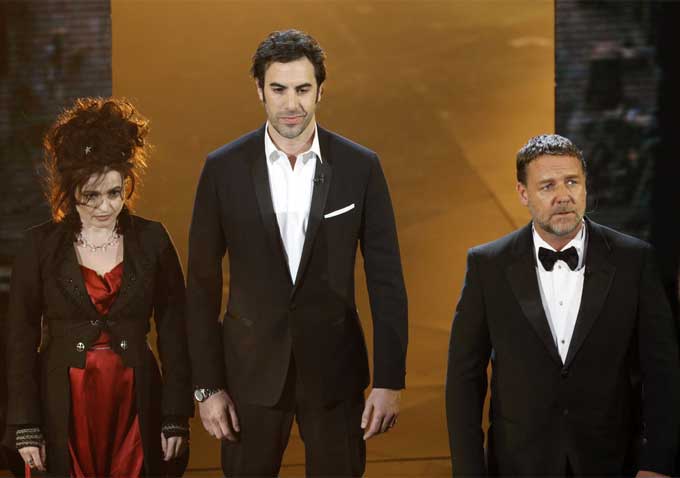 What was worst about MacFarlane’s many failed bits was how broad and easy they were in their attempts to be edgy, particularly when it came to attempted quips about women. Misogyny’s consistently been an undercurrent in his work, and it was hardly subtextual here. From the “boob” song to the line about Salma Hayek’s attractiveness overcoming her apparently incomprehensible accent, from the eating disorder joke congratulating the beautiful women on “giving themselves the flu” to the bit about “Zero Dark Thirty” being about “every woman’s innate ability to never ever let anything go,” the rage against the female half of the population that MacFarlane’s always seemed to harbor was uncomfortably close to the surface.

But not even MacFarlane’s Adele fat joke by way of Rex Reed could change the fact that women were responsible for the majority of the interminable night’s few highlights — divas Shirley Bassey, a terrific Jennifer Hudson and Adele stole the show with their performances, though the faulty sound mix that plagued the ceremony left the latter sounding swamped by the backing orchestral arrangement, while Jennifer Lawrence taking a tumble on the stairs in her voluminous dress and then laughing at herself about it in her speech was an endearingly human moment. 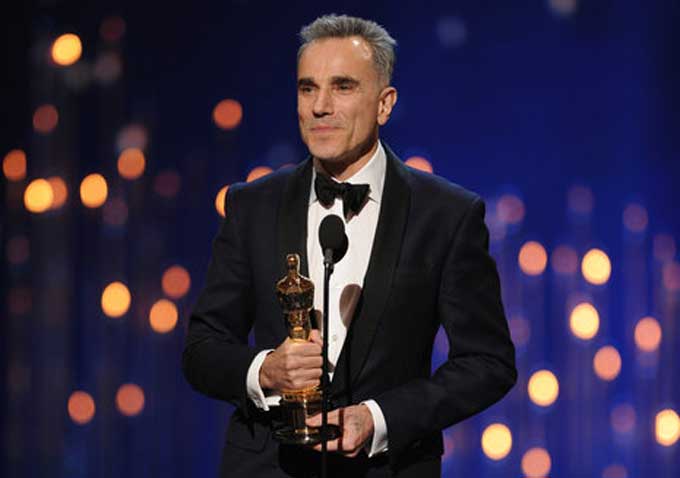 Those sparks of life were very scattered in what was, aside from MacFarlane, a well-behaved affair in which the threat of the “Jaws” theme as playoff music made every speech feel hurried, after it was used to impolitely cut off visual effects award-winner Bill Westenhofer’s attempt to bring up the financial problems of VFX house Rhythm & Hues, who worked on winning film “Life of Pi.” It was Daniel Day-Lewis who got the night’s biggest reaction with a joking mention of how he’d been in line to play Margaret Thatcher while Meryl Streep, who presented the award, was due to take the role of Lincoln, and they “decided to do a straight swap” — a funny line to start off a sincere, classy speech that was a reminder of how these events can, and really should, work.

Not that we needed another one — as Shatner grumbled, “why can’t Tina and Amy host everything?” Fey and Poehler oversaw an uncommonly good Golden Globes telecast last month that was everything the Oscars were not, including something that was actually entertaining to watch. MacFarlane may have been a terrible fit for host, but he’s that’s because he’s an example of the identity crisis the award show and the industry have been having in recent years. As the middle drops out of film and there’s a growing divide between indies and massive franchises, the intersection between craft and celebrity that the Oscars celebrate becomes an ever more precarious place, and the ceremony has always displayed a warped idea of what people at home want to watch and what’s important.

“You guys have made some inspiring movies. I made ‘Ted.'” said MacFarlane. “Your movies are going to win awards. My movies are in Redboxes outside of grocery stores being urinated on by bums.” But that urinal cake of a DVD was also the 9th biggest of the year at the box office, so it’s hard to imagine that he feels all that bad or, really, cares — what does he need awards for? His sizable following probably checked out long ago, if they tuned in at all. It’s everyone else who had to suffer.