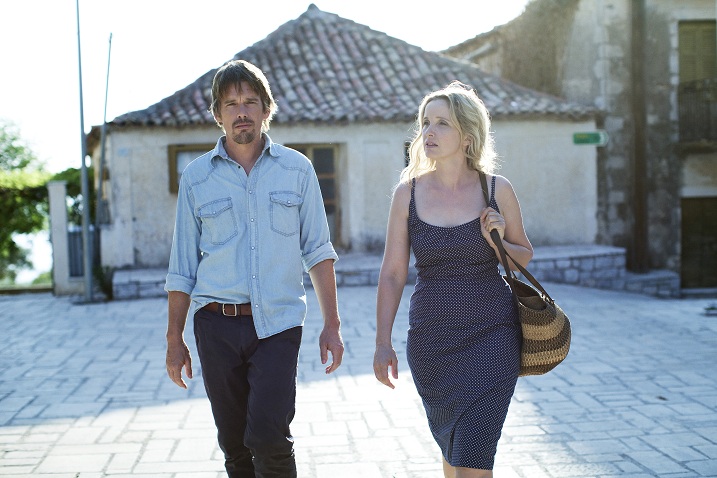 Indiewire is heading down to Austin today for the kickoff of 2013’s SXSW Film Festival, which starts today and goes until Saturday, March 16th. While we’ve already chronicled ten films that we can’t wait to see for the first time, the packed slate of exciting films also brings a ton of already established festival favorites to Austin. Below you’ll find our archive of SXSW-playing films that we’ve already seen and reviewed, including Harmony Korine’s “Spring Breakers” and Richard Linklater’s “Before Midnight.”

“Before Midnight”
With “Before Midnight,”
Richard Linklater has completed one of the finest movie trilogies of
all time. Nearly 20 years have passed since Jesse (Ethan Hawke) and
Céline (Julie Delpy) met on a train in Vienna and spent a passionate
night together in “Before Sunrise,” then abruptly parted ways, only to
tentatively pick up where they left off nine years later with “Before
Sunset.” That movie ended without resolving a tantalizing possibility:
Would Jesse, now a successful writer stuck in a dead-end marriage, truly
miss his flight back home and spend more quality time with Céline?
“Before Midnight” answers that question while asking many more as it
consolidates the full power of the earlier movies into a masterful
treatise on the evolution of romance. Read more here.

“Computer Chess”
There is an immediate sense of change afoot in “Computer Chess,” Andrew
Bujalski’s fourth feature as writer-director, visible to anyone familiar
with his previous work. While Bujalski’s influential “Funny Ha Ha” —
along with follow-ups “Mutual Appreciation” and “Beeswax” — were almost
defiantly shot on 16mm film and focused on the interpersonal
relationships of chic young adults, “Computer Chess” is a period piece
set 30 years in the past and shot on low-grade analog video.
Experientially, however, “Computer Chess” falls in line with its
precedents while achieving much funnier, offbeat results. Read more here.

“Upstream Color”
Shane Carruth’s 2004
time travel drama “Primer” provoked endless scrutiny for its heavy
reliance on tech speak that the director refused to dumb down. His
long-awaited followup, “Upstream Color,” also maintains a seriously
cryptic progression that’s nearly impossible to comprehend in precise
terms, but its confounding ingredients take on more abstract dimensions.
An advanced cinematic collage of ideas involving the slipperiness of
human experience, Carruth’s polished, highly expressionistic work bears
little comparison to his previous feature aside from the constant mental
stimulation it provides for its audience. This stunningly labyrinthine
assortment of murky events amount to a riddle with no firm solution.
Read more here.

“The Act of Killing”
In Joshua Oppenheimer’s “The Act of Killing,” a pair of gangsters —
responsible for murdering an untold number of suspected communists in
the years following the 1965 overthrow of the Indonesian government —
get the chance to recount their experiences. At first showing no visible
remorse, the men boast of their achievements, and Oppenheimer
capitalizes on their enthusiasm with a twisted gimmick: The men are
given numerous opportunities to reenact the murders for Oppenheimer’s
camera, sometimes emphasizing their brutality and occasionally
delivering surreal, flamboyant takes that offer a grotesque spin on
classic Hollywood musicals. Playing make believe with murderers,
Oppenheimer risks the possibility of empowering them. However, by
humanizing psychopathic behavior, “The Act of Killing” is unparalleled
in its unsettling perspective on the dementias associated with
dictatorial extremes. Read more here.

“First Cousin Once Removed”
Documentarian Alan Berliner is frequently the star of his movies, but
his focus extends beyond his neuroses. Rather than the star of the show,
he’s a vessel for bigger ideas and evades the perils of self-indulgence
that could result from putting himself in front of the camera. That tricky balance is on display better than ever in the stirring
“First Cousin Once Removed,” which deepens an oeuvre that has already
dealt with the tender issues of father-son relationships (“Nobody’s
Business”) and insomnia (“Wide Awake”) by exploring his fears of
senility to devastating effect. Using a powerful focal point to manifest
the movie’s central concerns, Berliner makes his interest in the topic
relevant to everyone. Read more here.

“The Pirate Bay: Away From Keyboard”
A funny thing happened in the moments leading up to the Berlin
International Film Festival world premiere of “The Pirate Bay: Away From
Keyboard,” a documentary about the prosecution of the titular Swedish
file sharing site’s founders. Minutes before the screening, director
Simon Klose called a friend up in front of the audience and asked him to
unlock a version of the movie uploaded to YouTube, appropriately
setting the stage for a tale focused on internet freedoms. The lights
went down; the screen lit up. But before “TPB AFK” started, the same
warning sign preceding all movies at the festival appeared. “Film piracy is illegal,” it read, an inadvertent irony not lost on the
majority of the room. Chuckles circulated. In a way, the story had
begun before a single frame. At the root of “TPB AFK” is a fundamental
tension between conventional views on copyright law and the emerging
standards of digitally savvy users. Klose’s entertaining, passionate
documentary wholeheartedly endorses the latter group, and its
sympathetic stance is infectious — but only if you’re already amendable
to the general cause. Read more here.

“V/H/S/2”
Last year’s anthology horror production “V/H/S” was a revelation mainly
because it took the overly familiar found-footage genre and exploited it
to the fullest extent. The sequel achieves a similar goal
with more frightening extremes. Containing only four spectacularly gory
shorts directed by emerging genre filmmakers, along with an equally
unsettling wraparound tale, “V/H/S/2” lacks some of the original’s
subtleties but delivers a nearly unbroken series of visceral shocks. The
last movie was a wild ride with several stops along the way; “V/H/S/2,”
once again produced by the Bloody Disgusting production team known as
The Collective, pushes full throttle ahead the whole way through. Read more here.

“Much Ado About Nothing”
There’s a certain irony to Joss Whedon’s adaptation of “Much Ado About
Nothing”: While the script culls a beloved literary achievement more
than 400 years old, it has relatively uncomplicated aims. Made in the
immediate aftermath of Whedon’s massive production of “The Avengers” and
shot over the course of a two-week period at the cult director’s Santa
Monica home, “Much Ado About Nothing” has the scrappy feel of a high
school play populated by professionals looking to take the pressure off.
Call it a Shakespearean catharsis or just call it a lark — either way,
the movie represents Whedon’s least essential work, regardless of the
material’s inherent comedic inspiration. Read more here.

“You’re Next“
“You’re Next” doesn’t break new ground in the horror genre, but it
sticks to rules that work. Director Adam Wingard (“A Horrible Way to
Die”) and screenwriter Simon Barrett (“Dead Birds”) demonstrate a firm
grasp on their material, delivering a tightly-wound survival story
replete with disarming humor that holds the whole bloody mess together. Read more here.

“Yellow”
Nick Cassavetes has yet to hit on a filmmaking style to rival his
father’s legacy, but with “Yellow,” the director of “The Notebook”
presents an unhinged portrait of emotional turmoil with bold stabs at
expressionistic representation at every turn. It’s not only Cassavetes’
best movie, but also a fascinating alternative to conventional melodrama
that burrows inside its troubled protagonist’s head and unleashes her
emotions in vivid terms. No matter how messy it gets, “Yellow” renders a
troubled subjectivity with striking creativity. Read more here.

“Spring Breakers”
“Spring Breakers” wouldn’t be a Harmony Korine movie if it wasn’t
polarizing in some way. Sure enough, the latest by the director of
“Gummo” and “Trash Humpers” seems calculated to outrage, titillate
and/or exhaust viewers with its gleefully nihilistic portrayal of spring
break in St. Petersburg, Florida, seen here as a slickly stylized,
slo-mo bacchanal of keg stands, bong hits and topless coeds. Read more here.

“Museum Hours“
To date, Jem Cohen has made intimate non-fiction diary films rooted in
an attentiveness to atmosphere and riddled with small observations
rendered in profound terms. While his new feature “Museum Hours” is
technically his first narrative effort, with a pair of amateur
performances and the backbone of a fictional story, its constant
introspection and remarkable sense of place provide a fluid connection
to the earlier work. With a keen eye for the capacity of fine art to
address a complex range of attitudes and experiences, “Museum Hours”
effectively applies Cohen’s existing strengths to a familiar scenario
and rejuvenates it by delivering a powerfully contemplative look at the
transformative ability of all art. Read more here.

“Lords of Salem“
Metal rocker Rob Zombie’s second career as a filmmaker proved he was
just as capable of unsettling showmanship behind the camera as he was
onstage. His frightening “House of a 1,000 Corpses” hinted at the
spectacular portrait of depravity that came next in 2005’s “The Devil’s
Rejects,” which got so intimate with serial killers even some dedicated
genre fans felt it crossed a line. Zombie’s two “Halloween” remakes,
however, found less favor, which means it’s time for a comeback. With
the effectively creepy “The Lords of Salem,” Zombie reaffirms his
capacity to tap into the genre’s strongest qualities. Read more here.

“The East”
Suspenseful, ludicrous, fascinating, and utterly unsubtle, Zal
Batmanglij’s “The East” plays like an unholy mash-up of “Martha Marcy
May Marlene” and “Alias.” The film builds on the themes of cult and
identity that Batmanglij and his star Brit Marling explored artfully in
their breakout debut “The Sound of My Voice.” But here, that psychology
is in service of a fast-paced espionage potboiler. Read more here.

This Article is related to: Festivals and tagged Before Midnight, Computer Chess, First Cousin Once Removed, Lords Of Salem, Much Ado About Nothing (2013), Spring Breakers, SXSW, The Act of Killing, The East, The Pirate Bay - Away From Keyboard, Upstream Color, V/H/S/2, Yellow, You're Next