Classical Filmmaking: The Theme That Drives All of Sam Raimi's Movies 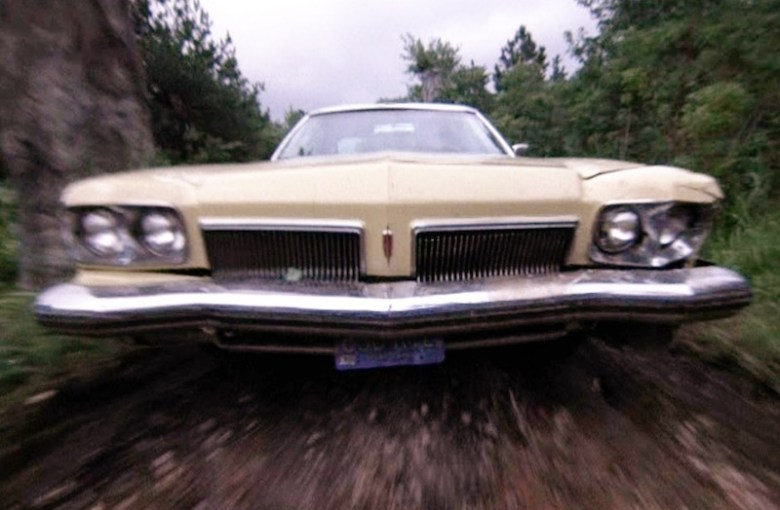 Some directors like to sign their movies with little trademarks that belong only to them. Alfred Hitchcock made a small cameo in each of his films. John Landis almost always includes the line “See you next Wednesday.” Sam Raimi actually has two trademarks that pop up over and over again in his work — and more often than not, one represents the other.

One of those trademarks has been well-documented in articles and interviews with Raimi himself. It’s a 1973 Oldsmobile Delta 88 — or, as Raimi simply calls it, “The Classic.” The Classic has appeared in almost all of Raimi’s movies, starting with 1982’s “The Evil Dead,” where it played the car driven by Ash (Bruce Campbell) and his friends to the cabin in the woods where they meet their untimely fate. The Classic was the only member of the cast besides Campbell to return for each of the two “Evil Dead” sequels. In the interim, it also appeared in “Crimewave” and “Darkman,” and later it popped up again in “A Simple Plan” and “Drag Me to Hell.” The Classic played Annie’s car in “The Gift” and Uncle Ben’s car in the “Spider-Man” movies. When Raimi made a Western, 1995’s “The Quick and the Dead,” Raimi supposedly disassembled the car and hid some of its parts inside a covered wagon used in the picture. I didn’t spot The Classic in Raimi’s new film, “Oz: The Great and Powerful,” but it wouldn’t surprise me if Raimi pulled a similar stunt to sneak it in somewhere.

Raimi’s other trademark is less widely discussed, but no less prevalent or important. Like The Classic, it debuted in “The Evil Dead” and returned over and over. This trademark is a theme: the dangers of accidentally opening Pandora’s box. In Raimi’s movies, knowledge is like toothpaste: once it’s out of the tube, you can’t put it back in. And pretty quickly, it turns into an awful mess.

Take “The Evil Dead,” for example. Ash and his four friends drive The Classic out to the cabin for a weekend getaway. In the cabin’s cellar, they find a creepy looking book, a creepier looking dagger and a reel-to-reel tape player. Curious, they turn the player on; it contains the audio notes of a professor who discovered this so-called Necronomicon, or “Book of the Dead,” buried in some ancient ruins. On the tape, the professor reads a demonic incantation from the book — and by playing the tape aloud, the kids unintentionally unleash a horde of dark spirits. These evil dead creatures torment, control, and kill everyone in the cabin except Ash, who, over the course of the film and its two sequels, fights off a possessed girlfriend, a possessed hand, a possessed version of himself and yet another possessed girlfriend in an attempt to try to rid the world of the demons awoken by the Necronomicon. To close Pandora’s box, as it were.

It’s important to note that Ash and his fellow travelers are not looking for the Necronomicon. They’re not professors of demonology, or devil worshippers, or treasure hunters looking for an ancient relic to sell to the highest bidder. They’re just a bunch of dumb college kids looking to have a little fun. They don’t even read from the Book of the Dead themselves — they merely play a tape in which someone else recites the offending passages. They’re in the wrong place at the wrong time. They play a tape unthinkingly. And their punishment for their seemingly minor offense is gruesome death.

Though said punishment for opening Pandora’s box varies in severity based on the genre he’s working in, Raimi has returned to that idea of innocent people becoming victims of happenstance and an excess of information in film after film. Between “Evil Dead II” and “Army of Darkness,” Raimi made “Darkman” a dark (obviously) riff on the super-hero genre about a brilliant scientist named Dr. Peyton Westlake (Liam Neeson) who invents an unstable synthetic skin; it perfectly mimics the look and feel of real human tissue but only for 99 minutes, after which it rapidly decays. Searching for an all-important legal document with the hilariously florid name “The Bellasarious Memorandum,” mobsters blow up Westlake’s lab with him in it, hideously scarring his body and his mind. With any chance of a normal life with his lawyer girlfriend Julie (Frances McDormand) destroyed along with most of his face, Westlake becomes hellbent on revenge against the mob.

A mad scientist on the verge of a potentially earth-shattering medical breakthrough sounds a bit more devious — or at least more purposeful — than “Evil Dead”‘s wandering college kids. But Westlake is actually just another Raimi hero in the wrong place at the wrong time. The Bellasarious Memorandum belongs to Julie, not to Westlake; she left it at his house the night before. Her discovering the memo was an accident too; she tells her boss that she found it while researching an unrelated real estate deal. So in sum we’ve got a well-intentioned attorney who unwittingly stumbles on a piece of paper and then equally unwittingly leaves it at her boyfriend’s house. And then for associating with this well-intentioned attorney, a well-intentioned scientist gets 90% of his skin fried off.

“Darkman,” being a Sam Raimi movie, piles more abuse on our hero. Accidentally being in the wrong place at the wrong time with the Bellasarious Memorandum means Westlake’s also in the wrong place at the wrong time for “The Rangeveritz Technique.” The burns he suffered in his lab’s fire are so severe, his doctors say, that they will leave him crippled with agonizing pain for the rest of his life. To prevent that fate — and without his consent — they give him the Rangeveritz Technique, in which the nerves of the spino-thalamic tract are severed so they can’t send pain impulses to the brain. The procedure makes Westlake invincible and super-strong, but leaves him with uncontrollable mood swings and bouts of madness. And so he becomes Darkman; Frankenstein and monster in one heavily bandaged body. All in all, it’s a really bad week for the guy (and when you think about it, wouldn’t “A Really Bad Week” make a perfect title for almost all the movies we’ve discussed so far?).

Out of all the preexisting super-heroes he could make movies about, Raimi chose the ultimate comic book victim of circumstance: Spider-Man. On a high school field trip, Peter Parker (Tobey Maguire) is bitten by a genetically altered spider. Unlike the Peter of the “Amazing Spider-Man” reboot, Peter’s not snooping around somewhere he’s not supposed to be. He doesn’t lie his way into Oscorp pretending to be a science intern. He even gets permission from the field trip chaperone to take pictures of the mutated spiders before he snaps off a few shots.

Once that spider digs its fangs into Peter’s hand, though, there’s no going back anyway. After the bite gives Peter super powers, he happens to witness a robbery, and decides not to stop it. The robber escapes, and then murders Peter’s beloved Uncle Ben (Cliff Robertson), who was waiting to pick Peter up in — what else? — his 1973 Oldsmobile Delta 88. Again, a seemingly mild sin comes with an unbelievably harsh lesson — in this case, that with great power must come great responsibility.

Like Ash before him, Peter Parker finds it difficult to get that toothpaste back in the tube. He defeats the Green Goblin*, but in doing so draws the ire of his son (and Peter’s best friend), Harry Osborn (James Franco). In “Spider-Man 3,” Peter and his girlfriend Mary Jane (Kirsten Dunst) just happen to be enjoying a night of stargazing in Central Park when an alien meteorite crash lands nearby and a venomous goo inside skitters out and onto Peter’s bike. It later infects Spider-Man’s costume, and then his personality. The way the evil costume turns good-hearted people into dark shadows of their former selves is not that dissimilar from the way Ash’s friends become Deadites in “The Evil Dead,” or the way Ash himself is turned into Evil Ash in “Army of Darkness.”

Using The Classic to play Uncle Ben’s car may have just been a fortuitous way for Raimi to shoehorn in his beloved trademark, but in the larger context of his career, it imbues that Delta 88 with even greater meaning than it had before, solidifying it as an extension of Raimi’s favorite theme, and making it his key symbol of the innocence that’s lost when one of his characters accidentally opens Pandora’s box.

A word now about The Classic. In trying to explain why Raimi loves this car so much, Campbell notes in his autobiography that the car was purchased new by Raimi’s father in 1973. He also mentions speculation that The Classic was the site where Raimi lost his virginity. For his own part, Raimi has described The Classic as “a sentimental old piece of junk.”

So for Raimi, The Classic is innocence and purity and nostalgia for that time before we all had to grow up and get serious and pay the bills and do whatever small scale real world toothpaste cleanup each of us deals every single day. In “The Evil Dead,” the college kids take The Classic to the cabin, and die. As they suffer horribly, the car sits in the front yard, a sad and blackly comic reminder of what their lives used to be before they opened the Necronomicon. In “Spider-Man,” when the robber kills Uncle Ben and steals The Classic to make his getaway, he is, in an almost literal way, stealing Peter Parker’s innocence too. Peter and Aunt May might get that car back eventually, but the good times it represented won’t return with it.

Just about all of Raimi’s films play out this bleakly, with one interesting exception: the 1999 baseball drama “For Love of the Game,” a melancholic but ultimately uplifting love story about an aging pitcher and his quest to throw a perfect game and reclaim the woman he’s loved and lost. “For Love of the Game”‘s hero, Detroit Tigers hurler Billy Chapel (Kevin Costner) accidentally opens his Pandora’s box the day before the final game of the regular season, when Tigers owner Gary Wheeler (Brian Cox) tells him a secret: Wheeler is going to sell the team to an ownership group that wants to trade Chapel. With a nearly two decade career nearing its conclusion, it’s up to Chapel to decide whether he wants to retire as a Tiger or to accept the deal and face an uncertain future in a new city.

In most other Raimi films, Wheeler’s disclosure would doom Chapel to certain misery and possible bodily dismemberment. But “For Love of the Game” works out a little differently. Chapel overcomes adversity to pitch a historic perfect game. The next day, he reconciles with his lost love Jane (Kelly Preston). If you’re looking for Chapel to be slowly tortured by circumstance and that signature Raimi dark humor, you won’t find it.

You know what else you won’t find in “For Love of the Game?” The Classic. It’s nowhere to be found. Reportedly, its cameo got left on the cutting room floor. Perhaps Sam Raimi looked at the film he was making, looked at the car, and figured that if was leaving out one trademark this time, he might as well leave out the other too.

*The experimental procedure that Norman Osborn undergoes to become The Green Goblin contains numerous side effects, including “violence, aggression, and insanity.” In other words: it’s the Rangeveritz Technique, and the Green Goblin is basically Darkman with a better complexion.

This Article is related to: News and tagged Sam Raimi