While Lincoln Center and the Museum of Modern Art’s high profile New Directors/New Films brings attention to filmmakers in the earlier stages of their careers — this year’s addition lurks just around the corner — it often banks heavily on festival-tested product, selecting movies that have already wowed the critics at Cannes and Berlin. The First Time Fest, by contrast, offers the chance for audiences to make some truly below-the-radar discoveries. While not every one of the twelve competition films in the inaugural run of the festival, which took place March 1-4 at the Loews Village VII in New York, are premieres, they are all first-time features, and they’re supplemented by another dozen-strong slate, a selection of debut films by the likes of John Huston and Sofia Coppola, with the directors in attendance where possible.

“I personally find it more exciting,” opined Village Voice critic Scott Foundas, when asked in one of the festival’s numerous accompanying panels about his preference for writing about first time films over those of established veterans. Everything about the festival is dedicated to this art of discovery, but it’s also about the inclusiveness of the enterprise. For the grand competition prize, which ensures the winning film guaranteed theatrical distribution through Cinema Libre, the audiences comprises the fifth judge, their texted votes weighted equally alongside that of celebrity judges like Christine Vachon and Fred Schneider. In addition, each filmmaker is subjected to a post-screening “hot seat,” a Q-and-A with festival programmer David Schwartz, followed by a round of (admittedly softball) grilling from the jury. Finally, the festival offers an array of panels, all held at the legendary Player’s Club on Gramercy Park, dealing with issues facing first-time filmmakers trying to make and market their product as well as concerns facing everyone interested in cinema, such as minority opportunities in the industry.

But for all the myriad events jam-packed into a long weekend of festival-going, First Time Fest is all about the competition entries, among which three in particular stand out. One of the highlights is “Submerge,” by Australian newbie Sophie O’Connor, in which same-sex desire is presented with both a mournful sense of longing and a loving sensuousness, the latter most evident in the way the director films bodies. Whether lensing graduate student Jordan (Lily Hall) slicing through the water in swim practice or finally consummating her long anticipated liaison with Angie (Christina Hallet), the wife of her faculty advisor, O’Connor builds a hothouse atmosphere in which passions alternately rise in tension or find luscious fulfillment.

Caught between the demands of her parents to focus on her swimming and her own interest in scientific research, the latter pursuit complicated further by the resulting romantic geometry, Jordan is a study in uncertainties. O’Connor and co-screenwriter Kat Homes are shrewdly perceptive about the predicaments of their young protagonist, evincing a keen understanding of the fluidity of sexuality and the subsequent confusions in interpersonal relationships. And if the film makes questionable use of a BDSM club as a signifier of Jordan’s degradation, it makes up for such missteps with such glorious understated moments as an early scene of Jordan and Angie sitting across the table from each other, studying, fanning themselves from the heat, roiling in a mutual state of unspoken desire.

Sexual fluidity and complex romantic geometry are also very much at play in Amélie van Elmbt’s road-trip drama “Headfirst.” When young acting student Adrien (David Murgia) runs across wayward Zoé (Alice de Lencquesaing) while both are hitchhiking across Belgium, he takes a detour to follow this intriguingly inscrutable young woman, making tentative romantic overtures while the two engage in bouts of charged playfulness.

Much of the pleasure in van Elmbt’s film, arguably the festival’s best, involves the two young characters figuring out precisely where they stand in relation to one another and to the wider world around them. As Adrien continues to follow Zoé while the latter looks for a mysterious older man, the stakes of their relationship keep shifting around in ways that the film nails with both utter precision and a lingering sense of mysteriousness. Along the way, the pair meets up with Adrien’s girlfriend, creating a brief love triangle that plays out in unexpected ways, and both actors get to show off their chops in scenes that always seem like more is at stake than the characters are willing to let on. But ultimately this is de Lencquesaing’s show as she crafts Zoé into a singular creation, by turns captivating, contrary and all too vulnerable. 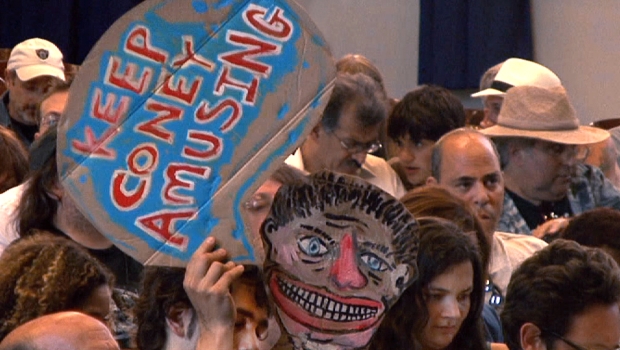 The strongest of the fest’s non-fiction films and the latest in an increasingly frequent line of development-of-Brooklyn docs (see also “The Battle for Brooklyn” and “My Brooklyn”), Amy Nicholson’s “Zipper” turns its angry gaze to the attempts, now officially ratified by the city’s re-zoning of most of the amusement park area, to turn Coney Island into something like Disneyland. While developer Joe Sitt rattles off the list of potential clients who want to open up shop on the waterfront (Dave and Buster’s! Bubba Gump Shrimp Company!) and then wonders what’s wrong with that, Nicholson intercuts shots of incensed Coney old-timers who lament the destruction of the unique character of the place.

By positing the south Brooklyn attraction as the latest frontier in the ongoing gentrification of the borough, the film makes a rousing populist argument against the famously inclusive destination becoming a playground of the rich. While Nicholson’s visual arguments rely too heavily on crude irony – juxtaposing sound bites of pols declaiming the waning vibrancy of pre-development Coney with shots of crowded beaches – the film’s sense of outrage at how the city government and developers banded together to override the will of the people is an object lesson in the cinematic presentation of democracy thwarted. As a celebration of an effervescent, open-hearted New York ethos, it’s a perfect fit for a fledgling festival that aims to contribute a similar vibrancy to Gotham’s enduring, ever-rich film culture.