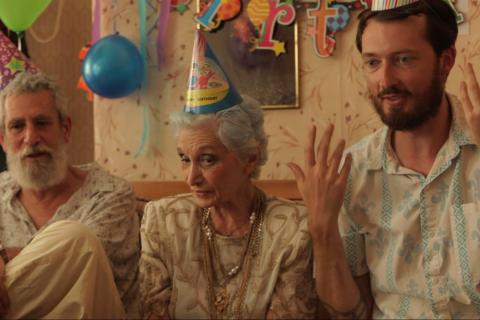 The plight of the idealistic young woman growing disillusioned in the big city is a familiar tale told most prominently in recent times by Lena Dunham. In her breakout feature “Tiny Furniture” and HBO’s “Girls,” Dunham explores the awkward and sometimes devastating chasm between fantasy and reality that often defines the trajectories of aspiring urban professionals.

“Swim Little Fish Swim,” the confident debut feature from writing-directing duo Lola Bessis and Ruben Amar, provides a gentler alternative to this same mold. Though less of a crowdpleaser than it may first appear, that’s the key strength that makes this admittedly uneven first feature stand out. The filmmakers juxtapose their character’s struggles against an older couple facing the practical issues of their livelihood, establishing a thoughtful examination of the harsher challenges styming the blind idealism of youth.

Though the framework is familiar, the movie has a delicate, personal quality that sets it apart from other character-driven dramas. Besses, who was 21 during production of the film and the story reflects a sincere need to explore the material. As 19-year-old French transplant Lilas, a woman trying to map out a creative life in New York away from her affluent family, she has none of the now-classic Dunham snark. An outsider who chose to avoid the posh European art schools that her successful painter mother implored her to attend, Lilas instead chooses to head to the city with her American boyfriend, whom she dumps in an opening scene.

The story then shifts to focus on Leeward (Dustin Guy Defa) and Mary (Bloom), the young Lower East Side couple with whom Lilas randomly crashes while seeking a new home. The plight of unemployed musician Leeward, constantly evading the need to monetize his work by relishing his bohemian lifestyle and driving his wife to a breaking point as she complains about the demands of their young child, exists a world apart from Lilas’ dreamy quest — but even as the dueling plots never quite mesh, they express complimentary ideas. A telling moment finds Lilas complimenting Leeward on his musical brilliance without comprehending his inability to translate his talent into a career. Without saying as much, Leeward’s reaction suggests that he envies her naivete.

“Swim Little Fish Swim” never satirizes its scenario. Whereas the privileged background of the characters on “Girls” positions the characters for audience derision, in “Swim Little Fish Swim,” Lilas is an immediate object of sympathy, her situation epitomized by the first image: Hands bound together as she hopelessly poses for a bizarre S&M painting before walking out the door, she’s literally trapped by her ambitions. Later wandering town with an 8mm camera filming everything she sees, her plucky intentions inevitably hit a wall. As she learns from an icy bureaucrat while apply for a work visa, anyone can make claims to being an artist; sustaining it professionally is a different matter. Despite the smallness of its design, “Swim Little Fish Sim” studies this truth with rare eloquence.

Though persistently charming, “Swim Little Fish Swim” maintains an observational technique that sometimes lends a meandering quality to the proceedings, drawing one out of the plot rather than deepening the experience of it. Yet the scattered approach eventually congeals into a pair of mutually involving stories, with the more mature one winning out — the tale of Leeward and Mary is unquestionably its strongest ingredient, as it finds the musician trapped in a lie, claiming he has been hired to score a commercial just to keep his nagging wife at bay.

Despite the lanky Defa’s goofball delivery as he routinely fails to achieve anything, the results are less comical than devastating, and just as Lilas flees the influence of her parents, he flees his own: Shabbat dinner at his neurotic family explains much about his declining initiative. Bloom’s performance as she comes to grips with her husband’s lack of responsibility effectively takes the movie to a darker place. Lilas is its vibrant soul, but Mary provides its tragic core.

The directors compliment the strong performances with a keen eye. Shot by Brett Jutkiewicz, the cinematography for the Safdie brothers’ “Daddy Longlegs,” the movie contains a similarly jittery, naturalistic style that resembles its protagonists’ slippery grasp on their fragile lives. With that dynamic in place, the movie’s semi-uplifting finale seems almost too clean — but by that point, “Swim Little Fish Swim” has justified the constant shifting around implied by its title.

HOW WILL IT PLAY? A good choice for the narrative competition at the SXSW Film Festival, “Swim Little Fish Swim” may not have enough qualities for a strong commercial reception, but its alluring setting might help it find some supportive viewers at microcinemas in New York, which may lead to further critical support.