"Roger, this is your happening, and it freaks me out!" Roger Ebert's Life Remembered In Sprawling Chicago Celebration 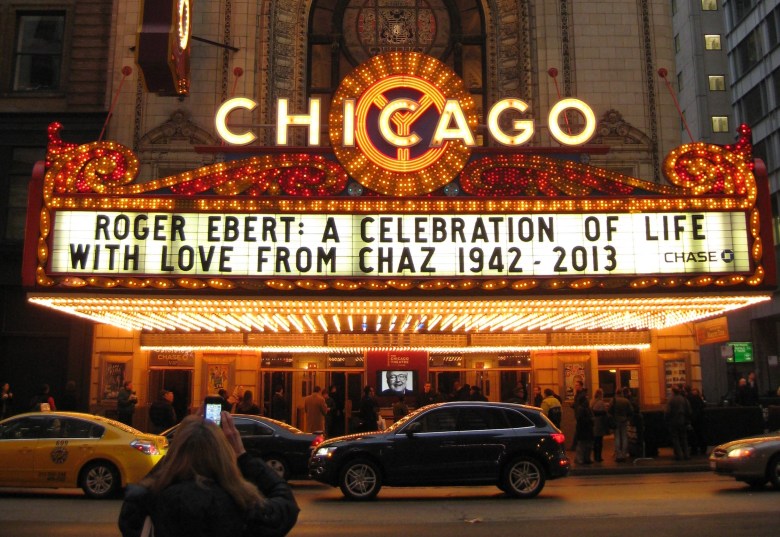 Roger Ebert was remembered as a groundbreaking film critic, champion of independent cinema, dedicated journalist, internet pioneer, man of letters, public face of disability, and devoted husband and grandfather at a nearly three-hour memorial tribute in Chicago that included cameos by everyone from John and Joan Cusack (reading a message from Barack and Michelle Obama) to the proprietor of the city’s Old Town Ale House.

“Roger, this is your happening, and it freaks me out!” his wife, Chaz Ebert, said by way of introduction, paraphrasing an iconic line from the Ebert-scripted “Beyond the Valley of the Dolls.” A crowd of 1,500 poured into the historic Chicago Theatre, which, as Telluride Film Festival co-founder Tom Luddy noted, Ebert had helped to restore by advocating its use for the 1981 roadshow presentation of Abel Gance’s “Napoleon.”

Gene Siskel’s widow, Marlene Iglitzen, recalled the days when Chicago critics previewed movies at a screening room on one of the building’s upper floors — and how her husband and Ebert would avoid sharing an elevator. Ebert himself could be seen seen onstage at least as recently as 2007 being honored by the Chicago International Film Festival.

Alternating clips and speeches, the tribute spanned both national figures like Sony Pictures Classics president Michael Barker (who recalled hanging with Ebert at Steak ‘n Shake and said “no public figure has ever meant more to me”) to family members like granddaughter Raven Evans, who recounted the books Ebert sent her throughout the years. In a touch that gave the evening the air of an Oscars ceremony, the presentation was bookended with musical performances by a choir from Chicago’s Fellowship Missionary Baptist Church.

The Hollywood Reporter critic Todd McCarthy said the first time he saw his name in print was when he wrote letters to his hometown film critic. He also praised Ebert’s uncommon ability to write the way he talked. “You always felt the real guy behind the words,” he said. Variety’s Scott Foundas pointed to Ebert’s advocacy for “One False Move” and what it did to launch the careers of Carl Franklin and Billy Bob Thornton.

Indeed, more than one filmmaker cited Ebert as a savior. Gregory Nava (“El Norte”) tearfully recalled his friendship with the man, while “Middle of Nowhere” director Ava DuVernay delivered a lengthy rundown his support for her over the years—as well as meeting him when she tried to crash an Oscars rehearsal as a young girl. Still another director Ebert championed, Steve James of “Hoop Dreams,” could be glimpsed off to stage left, working on his documentary adaptation of Ebert’s memoir, “Life Itself.” 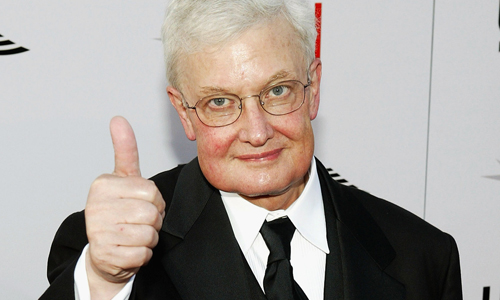 More than one speaker praised Ebert’s devotion to free speech and political voice. Former Playboy CEO (and onetime Boston Phoenix critic) Christie Hefner called him “an optimist about life and politics.” Milos Stehlik, director of Chicago’s cinema-and-video juggernaut Facets Multimedia, shared Ebert’s 1986 review of Jean-Luc Godard’s “Hail Mary,” which the theater showed in spite of protests and even a bomb scare. Ebert gave the movie 1.5 stars, yet wrote: “It is not a good film, but I submit that it is not a sacrilegious one.”

“Roger didn’t like ‘Hail Mary,'” Stehlik said, “but he defended our right to show it.” Recalling an evening watching Ebert talk about national issues with Michael Moore, Ebert’s co-host Richard Roeper remembered his sparring partner as a consummate storyteller. Andrew Davis (“The Fugitive”) compared him to Mark Twain and Carl Sandburg.

The political realm appeared in a different way when Joan Cusack, standing alongside her brother John, read a letter from the President and First Lady, who called Ebert “a man with remarkable tenacity and a contagious zest for life.” Afterward, John recalled anxiety about meeting Ebert during a press tour for “The Sure Thing,” and said that studios would always tell him Ebert was an important interview (“which in Hollywood,” he added, “I think means, ‘We can’t buy this one'”).

Others recalled Ebert helping them through alcoholism and, since losing his voice in 2006, providing a very public example of the notion that a disability doesn’t require slowing down. Some speakers simply shared old stories. Ale-house owner Bruce Elliott relayed a riotous tale of a bar fight with Ebert that ensued, in a roundabout way, after Elliott complimented a woman’s décolletage.

Livened with vintage clips from “Siskel & Ebert,” “The Tonight Show,” “The Critic,” and even YouTube-spread outtakes from the reviewing duo’s long-running series, the evening made for a more celebratory counterpart to Monday’s funeral mass. Both events were open to the public. Last night’s standing ovations were reserved for Chaz, who spoke, pausing at length, toward the evening’s end. “I don’t know what star planet he came from,” she said. “Or where he’s going now.”

More than one speaker mentioned Ebert’s 2011 Salon essay “I do not fear death,” in which he wrote, “After a lifetime of writing, teaching, broadcasting and telling too many jokes, I will leave behind more memes than many.”

Even an epic tribute couldn’t cover them all.