Tribeca: Amy Morton and John Slattery On Shooting 'Bluebird' in Maine For What Felt Like a Decade 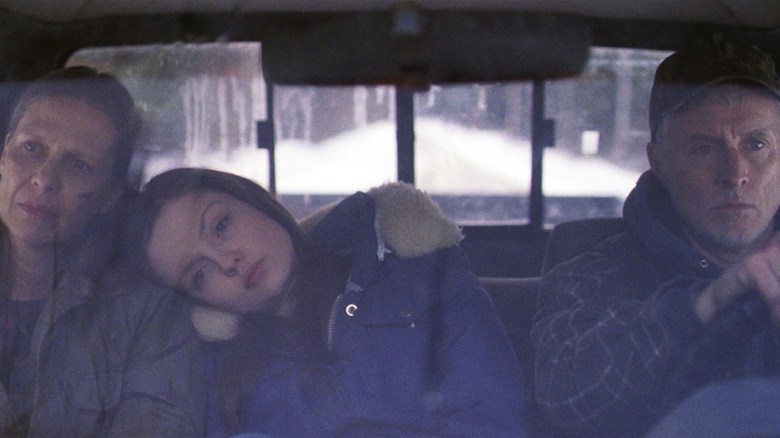 Writer/director Lance Edmand’s “Bluebird” was one of the first films to premiere at Tribeca this year, and received a warm response for its stunning cinematography from star indie DP Jody Lee Lipes (“Martha Marcy May Marlene” and fantastic turns from a great group of actors. Leading the ensemble is Steppenwolf theater vet Amy Morton, perhaps best known on screen for playing George Clooney’s sister in “Up in the Air.” Here she has the daunting task of playing a school bus driver whose moment of distraction lands a small child in the hospital. The Tony nominee pulls off the role with gut-wrenching results, making her one of our ten actors to watch at the festival.

“Mad Men” charmer John Slattery, who plays the wily and morally dubious fan favorite Roger Sterling on the show, also stars as her husband, a lumberjack who tries to keep the family, including Emily Meade as the daughter in another breakout role, falling apart. The two stars sat down with us to talk about the chilling, slow burning drama, what life was like on the freezing set, and reveal their directorial ambitions.

The film is so beautifully shot, and there are a lot of really long takes. Not only long takes, but long closeups of both of you. Starting with you, Amy, because I know your background is in theater. It’s kind of an interesting dichotomy because those long takes are very theatrical but the close-up nature of them aren’t at all. What was that experience like?

AM: It was good. It’s very, very different in the way it works. You’re not working for the back row so you have to be as minimal as you can possibly be. So I found that challenging, but in a really good way. It’s a little nerve-wracking having a camera right there, I’m not used to it so much, but after the fourth day or whatever you become used to it and it becomes your buddy, hopefully.

Right, and in some ways it is a very theatrical movie. Most of the cast is made up of theater actors and it’s very contained to this one specific community. But with the close-ups, there’s one in particular, a really long take, where your character has kind of a quiet breakdown. What’s the process of getting in the headspace of someone who just realized that they potentially may have just accidentally killed a child?

What was it like working with Lance Edmands as a director? I’m curious about his method, since he comes primarily from an editorial background. Does that inform his directorial decision? Did you get everything in one take, or anything like that?

JS: I think that, yeah, he has experience editorially. Working with actors, you could see it took a couple of days for him to realize– and I think any director has to figure out how to talk to, individually, who’s going to deliver the performance and tell the story. Amy works differently than I do, and we’re obviously different people. So you have to figure out how you’re going to get the performance you’re getting out of people. You could see him figuring out the adjustments he could make and what would be effective and economical so as to not fill people’s head with a bunch of bullshit before you shoot, you know. Things that aren’t useful. So I think he learned to make the adjustments he had to make very quickly. He’s smart.

The family dynamic that the two of you and Emily [Meade] have in the movie is very strong and realistic. There’s a scene where you [John] and Emily have a big confrontation and Amy’s character can hear it through the wall that’s pretty heartbreaking because we have such a strong sense of all of their relationships. Did the three of you spend a lot of time together? What was the rehearsal process like?

AM: We were in that small town, so a lot of our meals were all together. We were all staying in the same hotel. So we got to know each other but we didn’t spend a whole lot of time talking about our families. 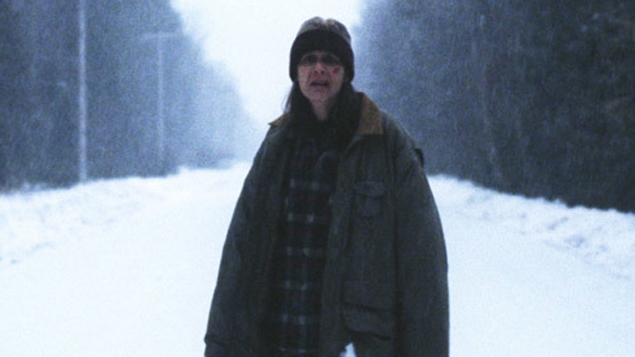 JS: Yeah. And the rehearsal was more sitting at a table and talking. We’d read the scenes and we’d talk about where someone came from, the sort of practical considerations that go into the scene. But again, you spend so much time in close quarters with each other you get the small talk out of the way and you sort of dispense with the formalities: Where are you from? Are you married? Do you have kids? Everybody knows the drill. You read each other a little bit, you go, OK, there’s someone I can just fall in with and we’ll toss it back and forth with and I think the three of us in that situation were willing to jump in. It can be pretty simple in some situations. You set up the scenario, the physical reality of these people, shoot the thing, and make adjustments.

Did the location in Maine inform a lot of the work? Because it’s such a unique location.

AM: Yeah. It was really cold.

You can tell just by watching how cold it was. It looked brutal.

AM: It was an economically screwed up town just like so many smaller towns are. I can’t imagine, it would’ve been a very different film if we had tried to fake Maine.

JS: Which a lot of places have to. They were saying how difficult it was to get financing knowing that Lance was going to shoot up in northern Maine when you, you know, could just shoot it someplace upstate New York. And we’ve all done those too. But it does inform everything that you do and it does help that the people sound like the people that you’re supposed to be in the film. It works to your advantage.

It would’ve been tough to fake all of the shots of the logging equipment working, for one. I’m assuming you had to spend some time with those guys learning how to work that equipment.

JS: A fair amount. Those guys have to make a living so they would come in on a day they weren’t working and we would shoot in the woods with all the machinery and they’d show me how to operate it, and we’d do what we had to do to get it on film. It wasn’t possible for me to hang out with these guys for three months and become one.

The interview is continued on page 2… 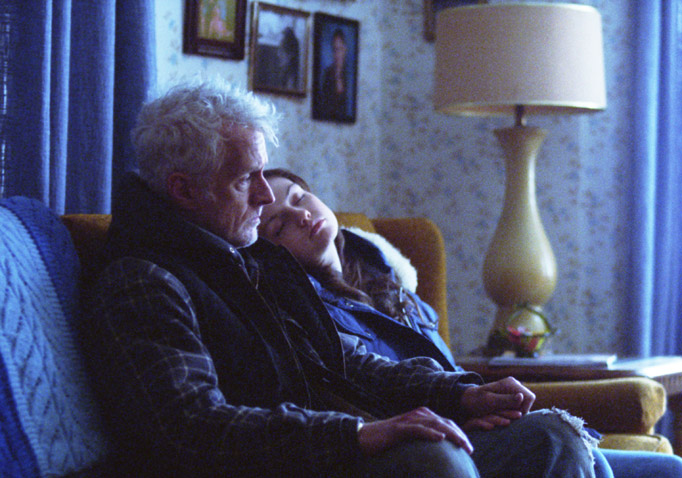 How long was the shoot?

AM: A couple of weeks.

I ask because, John, I’m assuming you don’t really have that much time in between “Mad Men” shoots to take on other film projects. Does that kind of inform your selectivity in the taking these smaller, indie films or is that just something that you’re naturally drawn to?

JS: I’m drawn to it. But I don’t want to spend too much time away from my family and I have this obligation that I have had for the last few years. So yeah, that leaves you a certain amount of time to work, if you want, and it takes something like this that’s really good or that I connect with to make me want to go.

Right, so it’s a sign of the strength of the script that instead of going on vacation or taking a job in some tropical place you went to a small, freezing town in northern Maine.

JS: Yeah, that definitely ran through my head, like, how did I get here? What the hell was I thinking? For a minute. But yeah, that’s how good I thought the script was.

And it’s certainly a chance to get away from wearing suits for days on end. It’s the polar opposite of that.

I think there is kind of a similarity in character between Richard and Roger [Sterling, from “Mad Men”] that comes out later in the movie, that while he’s this gruff, more serious guy who’s trying to do the right thing, there’s a scene that kind of implies some infidelity, and that he’s kind of a goof. He tells a joke that’s such, like, a dad joke and Roger Sterling is the king of dad jokes. Are you drawn to characters that kind of have that moral gray area, that conflict?

JS: No, I didn’t really think of it that way.

I guess that kind of sounds like a nice way to ask if you’re drawn to playing assholes.

JS: You know, there’s a lot more of that story that goes with the scene that you’re talking about.

AM: Yeah, that all got cut out.

JS: It didn’t inform the main story, Leslie going through what she’s going through so it was cut out. But I didn’t think of it in terms of that the guy’s an asshole because he does this or that. You know, it’s a difficult situation. They’ve been married for a long time. I think it was interesting the way it ended up being handled. All of a sudden you get from very little that something may or may not have happened and it’s a really awkward moment.

Yeah, I think that scene is very effective in what it implies, especially given that he is trying to do the right thing for the entire film. Lastly, just because it’s such a rare pleasure seeing you guys in features I wanted to ask if you had anything else coming up.

AM: I’m going to do a workshop of a play I’m directing next year at Steppenwolf.

JS: I‘m going to direct a movie. But that’s a big secret. No, it’s not a big secret but it’s just not put together fully yet so we can talk about that later.