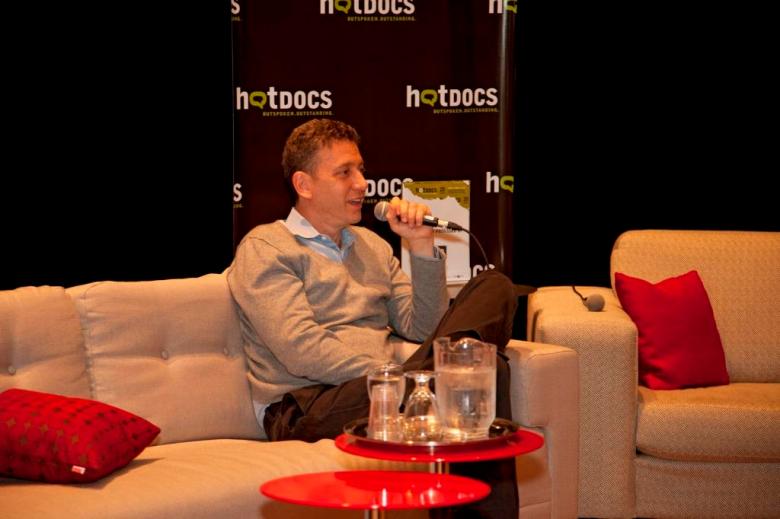 Few folks in the independent film industry are more qualified to teach a master class on rights management and film distribution than John Sloss. Founder of Cinetic Media, a co-founder of both FilmBuff and Producers Distribution Agency (the theatrical distributor of “Exit Through the Gift Shop,” “Senna,” and more), Sloss himself has facilitated the sale and/financing of well over 300 films including “Before Midnight,” “Little Miss Sunshine,” “Precious,” “Super Size Me,” “The Kids Are All Right” and “We Need To Talk About Kevin.”

Sloss has been at it for 30 years, and at Hot Docs Thursday he indeed taught a master class, opening this up by noting that he’s never been “at a more
dynamic transitional period” in terms of the way he does his job in a quickly changing world of film distribution.

“For me, it’s extremely exciting,” he said. “It creates
great opportunities for people making movies.”

For nearly 90 minutes at Hot Docs’ industry center on the campus of the University of Toronto, Sloss sat down with a good hundred budding filmmakers, answering their questions about how to get their films out into the world. Here’s 10 highlights:

1. On how to utilize the current state of distribution as a filmmaker: “Our general feeling at Cinetic — and we say this on a daily basis — is that all good films have one community in common: Cinephiles. Which are people who just love good films. But if you push through that and go beyond it, every film has other identifiable communities. What the promise of infinite storage in cyberspace brings — together with the ability to market directly to the core community for your film — is this idea that you can now go out and monetize. You can go find the eyeballs that we meant to see your film even if you don’t get the interest of the various distributors that usually pay money to pick up all the rights and release films theatrically.”

2. On the importance of a theatrical release (or lack thereof): “If you want the most amount of people to see your film, it isn’t something you’ll necessarily accomplish by insisting on that it go through a theatrical release. There are films that lend themselves to theatrical release because of their spectacle or subject matter. But if you go to New York there are 22 films released every weekend and 18 of them just die a painful death. And I think those films actually get damaged in the after-market from having been released theatrically.”

3. On handing over transactional rights to broadcasters: “The short answer is that you should be mindful of this as a filmmaker. The default position of any broadcaster is to take all the rights, but most of them will get off that position if they really want your film.”

4. On what to look out for with digital aggregation: “I’m sick of the opaqueness of Hollywood accounting. Of distributors who basically tell you you are on a need-to-know basis. There are different components to aggregation. There’s optimizing the film and being smart enough to know what the sequence of windowing and where the film should be so you can optimize the revenue. I’ll give this example. I sold two films at the same time. One was “Freakonomics” and one was “Client 9.” “Freakonomics” did huge business on iTunes and no business on cable/VOD. “Client 9″ did huge business on cable/VOD and almost no business on iTunes. There’s a lot of accumulated knowledge that comes with putting those films out and knowing what the sequence is. Can you do a stunt on Hulu for a day that functions as a word-of-mouth for transactional? It’s sort of the wild west now… There’s so many ways you can stunt and sequence a film to optimize it. And I think an aggregator should know that.”

5. On how the filmmakers role does or doesn’t change in the VOD space:
“I don’t really see the filmmakers’ role changing. I think filmmakers
have an obligation to shill for their movie. And I think anyone who
doesn’t see it that way deserves the consequences. Especially in
documentaries. You can have the subject and the subject can be out there
selling the film. But it’s about storytelling. The business we are in
is storytelling. If the storyteller basically can’t get out and tell the
story about the story they are telling, then why are they doing it?
I’ve always taken that point of view.
6. On expectations for documentary filmmakers in particular: “If you’re not Michael Moore or Morgan Spurlock, you’re not necessarily going to immediately make millions of dollars. I mean, Alex Gibney made serious money off “Client 9″ but made almost nothing off ‘Taxi From The Dark Side,’ which is the film that won him an Academy Award. You have to responsibly look at the subject that you’re writing about and whether it is a  commercial subject. Not everything is.”

7. On piracy: “Piracy is a drag. I believe in copyright. I know that’s probably unpopular point of view among the youth of today. But I’m very concerned about it. I’ve always said that I’m not concerned about the demise of the DVD. I’m all in favor of economic efficiency. If the right price for content is $1.99 then that’s what it should cost. The free market system should determine that. If you have something that is completely viral and people have to have it and you want to charge $50 or it, then more power to you. But the only thing that cuts against that is piracy. Piracy is a big concern. My own point of view about it — and I don’t know if people feel the same — is that it is less about the desire to have something for nothing than it is about the desire to have something when and where you want it.

8. On how that applies to the film industry today: “The mistake the music industry made was thinking they control when people would listen to music. If iTunes had started the same day as Napster then the music industry may look very different today. The equivalent of that in the film space is the insistence of theaters on windowing. On having there be four months between when you can see something in a theater and when you can see it at home. If say to a 25 year old today who can just go to BitTorrent that they can’t buy something even if they wanted to. They’re gonna say screw you and they’re going to download it… It’s a real concern. I am a huge advocate of collapsed windows. Most studio heads are, oddly enough, huge advocates of collapsed windows. The only people who aren’t are the people who own movie theaters.”

9. On what kind of films do well on various platforms: “There are certain films that do well in general on VOD and those are films that are genre or have movie stars in them. The films that do well on iTunes are the ones that skew younger because of the sort of broadband utility. The people who tend to watch films on cable and VOD tend to be older and less technology savvy. There’s a better, more specific answer to that… But that’s sort of at a top level what the difference is.

10. On crowdfunding: “I am a gigantic fan of crowdfunding. I’m super annoyed I didn’t do the first mega one… the Veronica Mars or Zach Braff. I’m also very concerned that left to its own devices, it’s going to be sort of tarnished by being used incorrectly… Someone said something to me very early on that really resonated with me. Which is that crowdfunding is less about raising money than it is about building community. To finding the people that really support what you do. What I love about crowdfunding and what I’m dedicated to seeing happen is to use crowdfunding in essence to build loyalty. And I think the best use of crowdfunding is pre-selling. I’ve been making this point to filmmakers lately. The notion that there’s some guy who needs to give you permission to make a film — that being the financier — and then the film gets consumed is a very primitive notion in a universe where you can now go to the people who will eventually consume the film and get them to help finance the movie.”

This Article is related to: Toolkit and tagged Filmmaker Toolkit: Distribution, Hot Docs