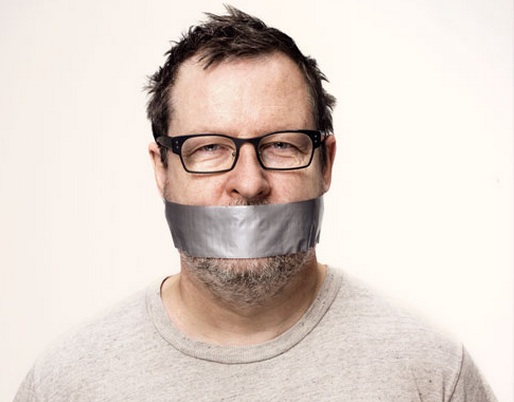 At the 2011 edition of Cannes, Lars von Trier caused quite a stir when he implied that he could understand how someone — someone like himself — could become a Nazi.  (READ MORE:  Lars Von Trier Declared “Persona Non Grata” at Cannes, Effective Immediately)  As part of the publicity for his new film “Nymphomaniac,” von Trier has released a new tape-over-his-mouth press photo (above) that symbolizes his decision to no longer participate in any press interviews.

Instead of doing press for “Nymphomaniac,” von Trier will gradually release a still and a short narrative that, according to a press release, “playfully unveils the multilayered universe of ‘Nymphomaniac.'”  Perhaps high off his involvement with the Dogme95 movement, Von Trier also revealed in the press release that he hopes to start a new film genre with “Nymphomaniac,” digressionism, wherein digression is the departing from the main subject.

The chapter teasers will gradually be revealed on the film’s website, www.nymphomaniacthemovie.com.  For now, all we have is a list of them:

CHAPTER 1  is  THE COMPLEAT ANGLER
CHAPTER 2  is  JERÔME
CHAPTER 3  is  MRS. H
CHAPTER 4  is  DELIRIUM
CHAPTER 5  is  THE LITTLE ORGAN SCHOOL
CHAPTER 6  is  THE EASTERN & WESTERN CHURCH (THE SILENT DUCK)
CHAPTER 7  is  THE MIRROR
CHAPTER 8  is  THE GUN