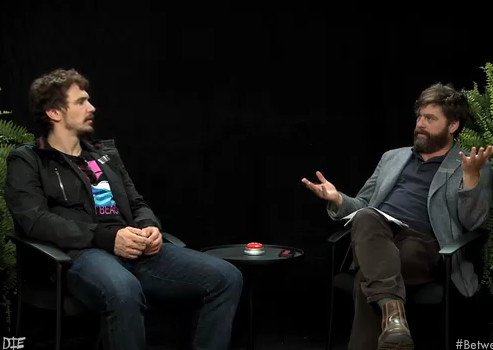 Zach Galifianakis brings us another episode of his Funny or Die series “Between Two Ferns”, with featured guest James Franco and a surprise musical performance by The Lonely Island.

The sketch has host Galifianakis asking a very disengaged Franco about everything from his poor performance at the Oscars and his “sausage.” Not exactly coming across as his biggest fan, he cuts off the interview to introduce the musical guest, The Lonely Island. The low budget setup then segues to a high quality production of The Lonely Island’s latest music video that riffs on “Spring Breakers,” with some pro gay marriage bits thrown in. How do the two correlate? We’re not really sure except that it’s pretty hilarious in the greatest nonsensical way possible. Ed Norton makes a guest appearance in the video as half of a happy couple, or as The Lonely Island guys put it, “two kings walking hand in hand.”