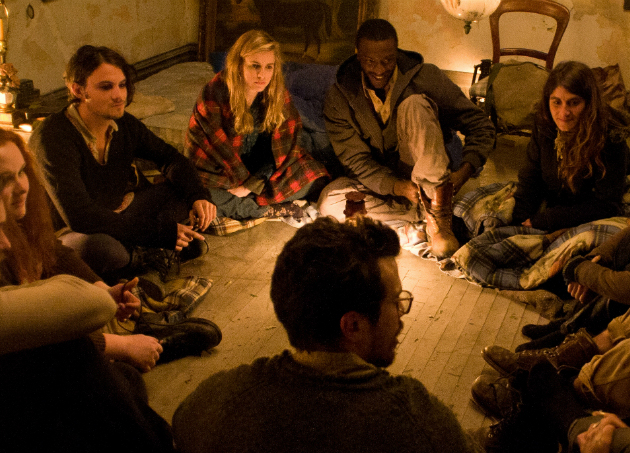 Editor’s note: A version of this review originally ran during the 2013 Sundance Film Festival. “The East” opens nationwide on Friday.

Suspenseful, ludicrous, fascinating, and utterly unsubtle, Zal Batmanglij’s “The East” plays like an unholy mash-up of “Martha Marcy May Marlene” and “Alias.” The film builds on the themes of cult and identity that Batmanglij and his star Brit Marling explored artfully in their breakout debut “The Sound of My Voice.” But here, that psychology is in service of a fast-paced espionage potboiler. As Sarah, Brit Marling plays a former FBI agent turned private security consultant who is paid to infiltrate a radical environmental group called The East. She more than confirms buzz that she will be one of film’s next major leading women, and she’s working with a strong set-up for a thriller, in a community that couldn’t be more relevant in the age of Occupy Wall Street, and which has lead to very mixed results on American screens (See: “Battle in Seattle”). There’s plenty to admire, but ultimately this thriller is as overheated as a radical’s rhetoric.

Sarah, a cinematic spy, says goodbye to her preppy boyfriend and smuggles a smartphone in the sole of her tennis shoe, after — in a slightly absurd sequence — dying her brown hair blonde to hide her identity. Then she’s off on the road, riding the rails with the lost kids, palling around the bonfire, dumpster diving, and snapping photos of the freegans she meets along the way. She sends her reports back to her home office, where her boss (a devious Patricia Clarkson) dreams up ways to profit from her intelligence. Eventually, she meets up with The East: a seemingly rag-tag band of misfits working out of what appear to be the rich-kid ruins of Wayne manor. The cult is led by a magnetic Alexander Skarsgaard, with signature six-pack abs and a Jesus beard so scraggly he could be starring in an Edward Sharpe & The Magnetic Zeroes biopic. Ellen Page plays the distrustful badass; Shiloh Fernandez is the loyal queer activist with eyeliner and a collection of harlequin coats. A charming Toby Kebbel shines as Doc, who despite his tremors and doubts, is the glue of the group.

The cast is strong, and the film is best in the few subtly wrought scenes that dramatize the allure and group dynamic of the cell. There’s a strange game of spin-the-bottle, a palpable, familial feel among the supporting cast by the river, an odd ritual dinner where the activists feed one another in straight jackets. Batmanglij has a particular talent for capturing that unmoored, twentysomething search for meaning, and the tight-knit allure of a group that offers a reason for living. But the film is so plot-driven, those don’t have much room to breathe.

Fast-paced and energetic, “The East” hits a beat and hurries along to the next “Jam.” As slickly paced as a big-studio espionage movie, it nearly succeeds as a pure adrenaline-rush thriller. In the end, the problem isn’t that there’s too much plot, but rather a certain dramatic illogic. The group’s first action is premised on the idea that a pharmaceutical has already made billions off a medicine that regularly causes crippling brain damage after just one dose, without being pulled off the market — when there are plenty of more plausible, less hyperbolic plot devices that wouldn’t have taken the film so far from reality. The second major plot (an attempt to bathe chemical executives in the same waste they dump into rivers) works well enough on its own, without additionally raising the stakes by grafting on a maudlin raft of daddy issues. Like the activists in the film, Batmanglij doesn’t quite seem to know when enough is enough.

It will be fascinating to see how activists respond to this film, since lefty groups are so rarely portrayed in fictional films and two of the only activists who get back-stories are revealed to be rich kids. Violent black bloc groups like the Weather Underground are, of course, rare, and most direct-action activists haven’t been violent at all. Most recent convictions have been for vandalism of storefronts or the sabotage of logging equipment, say, and not the murderous, Batman-villain plots dramatized here and gamed for maximum suspense. These make the cult itself more like something out of a police commissioner’s fever dream. Of course, this is a work of fiction. The often-fascinating film’s flaw is not unsatisfying because it’s unrealistic. Instead, it falls into that uncanny valley between art film and thriller, popcorn and politics, persuasive drama and exaggerated action. It will be fascinating to see what the undeniably talented Batmanglij does next.