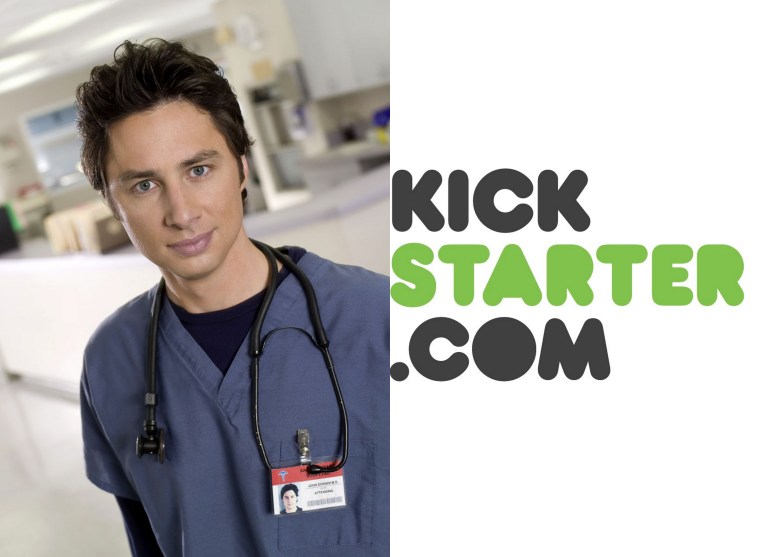 Earlier this week, we did a round-up of the best arguments for and against celebrities and studio subsidiaries on Kickstarter.  Though the Braff detractors are especially loud, it seems commentators are split on whether this is a good thing.

The defenses of Braff are perhaps not getting enough play, and Braff and Kickstarter executives took to the Internet this week to explain why the likes of Braff and “Veronica Mars” may actually help other creators on Kickstarter.

The loudest argument against Braff and “Veronica Mars” is that members of the Kickstarter community are being persuaded to donate to these campaigns from more established, successful creators instead of donating to the next unknown genius.

First, let’s remind ourselves of what others have said in defense of Braff and “Veronica Mars”:

Karla Starr on Psychology Today says that this argument from smaller creators is a red herring, that these arguments are motivated by envy and that Braff and “Veronica Mars” do for crowdfunding what Starbucks does to indie coffee shops, it normalizes the practice of donating to projects just as Starbucks normalizes drinking coffee.

Writing on Crooked Timber, John Holbo says that it’s very difficult for creators without social capital to convince people to donate to their projects.  For Holbo, too, the argument against Braff and “Veronica Mars” is a red herring.

Here at Indiewire, we started covering crowdfunding campaigns when they were new, then started to just cover more-established creators.  Eventually, we were overwhelmed and didn’t know how to give attention to all the campaigns that were looking for coverage.  We cover at least four campaigns a week through our Project of the Day column, but we get many more requests for coverage than we can accommodate.  The space is crowded, and it’s increasingly difficult to garner attention for your project no matter who you are.

Much of the arguments against Braff and “Veronica Mars” rely on an argument about what crowdfunding campaigns are supposed to be for.  But the fact that campaigns can be launched for a variety of reasons doesn’t mean that Kickstarter is doing something wrong regulating its site.  It seems reasonable that the audience should respond to campaigns that are treating their consumers unfairly.  An article on the Toronto Standard, for instance, makes a good argument about the political economy of these two campaigns in particular and how some of the exchanges may be unfair.  We covered an instance of the market responding to unfair rewards for donations in the inevitable failure of the Melissa Joan Hart Kickstarter campaign.

Yesterday, Kickstarter execs Perry Chen, Yancey Strickler, and Charles Adler responded to the criticism by writing the post “Who is Kickstarter for?,” which explained how many projects by lesser-known artists got funded by people introduced to crowdfunding by Braff.  They also reminded the film and video community that these arguments had been levied before by members of the comics and gaming communities when similar big players set up accounts in those categories  (Here’s a post they wrote about those then).

The Veronica Mars and Zach Braff projects have brought tens of thousands of new people to Kickstarter. 63% of those people had never backed a project before. Thousands of them have since gone on to back other projects, with more than $400,000 pledged to 2,200 projects so far. Nearly 40% of that has gone to other film projects.

As part of “Kickstarted,” a film being made about crowdfunding, Braff made a video explaining why his fans added a huge boost to Kickstarter, saying that he brought people who were not savvy about crowdfunding before that point into the fold.  In a suspect move, he also goes into a self-congratulatory long history of interacting with his fans, making the claim that he’s always been on the cutting edge of making fans feel close to him, interacting with fans on blogs and Myspace before that was “a thing.” (This rant also includes a takedown of Morgan Freeman for not really being the voice behind his Reddit Ask Me Anything.) He also repeats his claim that he was active on Kickstarter before launching this campaign (Braff had donated to six campaigns on the account attached to his film “Wish I Was Here” at that project’s launch time, and has since donated to six more.)  It’s this tone of Braff’s that reminds us why he’s the Internet lightning rod he is. Here’s that video: