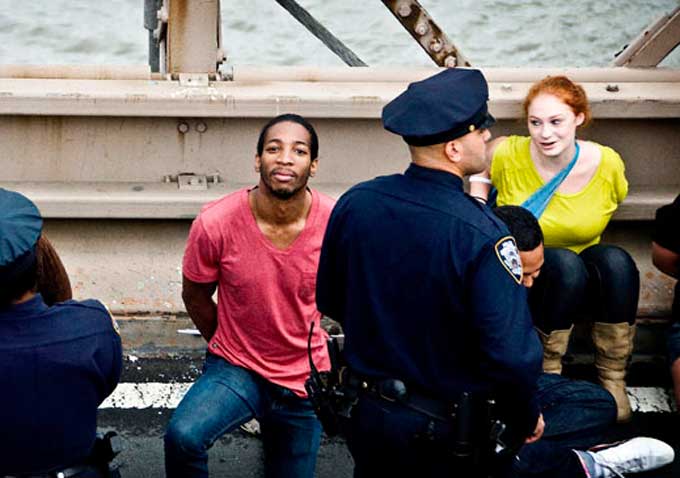 At its first ever upfront presentation in March, Participant Media announced a name for its new cable channel — Pivot — and the programming it will launch with on August 1st and be developing for roll-out in the months to follow. The new series include a docudrama from the team behind “Brick City,” a talk show hosted by Meghan McCain and a variety show using material from Joseph Gordon-Levitt’s crowdsourced hitRECord project and hosted by the actor. The only new program that will be ready at launch is “TakePart Live,” a Millennial-centric five-night-a-week show that sounds like the network’s issue-focused answer to “Total Request Live.”

Today, Pivot announced dates for the debuts of its new programs and the television premieres of two docs, the Participant-produced “Last Call at the Oasis” and Aaron Aites, Audrey Ewell, Nina Krstic and Lucian Read’s “99%: The Occupy Wall Street Collaborative Film,” which the network acquired off the festival circuit. Here are Pivot’s plans for its first round of original programming:

TAKEPART LIVE – Premieres Thursday, August 1, 2013 at 12am ET/PT (weekdays at 12am ET/PT)
‘TakePart Live’ is a daily late night show – for and with our audience – about the topics and headlines that matter most to the Millennial Generation. Five nights a week, TPL continues the online chats viewers have been having with their friends all day through interactive conversations that go deep into what its audience is talking about now – all while giving them the tools they need to get informed, get active, get involved and take part, live.

RAISING MCCAIN – Premieres Saturday, September 14, 2013 at 10pm ET/PT
(Saturdays at 10pm ET/PT)
A genre-busting docu-talk series following Meghan McCain, the outspoken daughter of Senator John McCain, on the road talking to unexpected experts, regular people and members of her generation, exploring the most important and unusual questions of the day framed by Meghan’s experiences in her personal life. Series will explore topics ranging from Bullying and Feminism to Sex Overload and the Death of Romance, among many others. Producer: Go Go Luckey Entertainment; Julie Auerbach, Henry Capanna, Tina Gazzerro
(10 X :30)

JERSEY STRONG – Premieres Saturday, September 14, 2013 at 10:30pm ET/PT
(Saturdays at 10:30pm ET/PT)
From the team behind the Peabody Award winning series, “Brick City,” this Newark based docu-soap chronicles the lives of two families from parallel universes — the street and the executive suite. Reformed Blood (Jayda) and Crip (Creep) are a modern-day Romeo and Juliet romance in the hood – raising two kids while pursuing their careers and following their dreams. Jayda is working to build mentorship programs for young women in Newark, while Creep balances a day job in sanitation with his dream of launching a comedy career. Brooke, a trial attorney who once kept Jayda out of jail, is balancing the stress of high stakes litigation with the real life drama of raising two college-aged kids with her partner in life and business, Maggie. “Jersey Strong” will explore Newark’s warm center and tough exterior through the eyes of two unconventional families striving to achieve the American Dream. Producer: Mark Benjamin and Marc Levin (10 X :30)

‘LITTLE MOSQUE’ (‘LITTLE MOSQUE ON THE PRAIRIE’ in Canada) – Premieres Monday, August 5, 2013 at 7pm ET
The long-running and critically acclaimed series takes a satirical look at a Muslim community living in Canada who has rented the town’s Anglican church to start a local mosque. The series has been seen in over 90 countries, except for the U.S. until now. Producer: WestWind Pictures (91 x :60)

LAST CALL AT THE OASIS – Premieres Sunday, August 25, 2013
Firmly establishing the urgency of the global water crisis as the central issue facing our world this century, this documentary illuminates the vital role water plays in our lives, exposes the defects in the current system and shows communities already struggling with its ill-effects. Featuring activist Erin Brockovich, respected water experts including Peter Gleick, Jay Famiglietti and Robert Glennon and social entrepreneurs championing revolutionary solutions, the film posits that we can manage this problem if we are willing to act now.

99% – THE OCCUPY WALL STREET COLLABORATIVE FILM – Premieres Tuesday, September 17, 2013
On September 17, 2011, The Occupy Wall Street movement propelled issues of economic inequality into the spotlight. 99% – The Occupy Wall Street Collaborative Film goes behind the scenes of the movement, definitively revealing what happened, and why. Personal stories imbue analysis of big picture issues with the real-world struggles of those compelled to take action, speak up, march and risk arrest. Supporters, participants, experts and critics shed light on why and how this movement took off with such explosive force, and ask what the next phase might encompass.