Pedro Almodovar On Nudity, Why 'I'm So Excited' Is His Gayest Movie Yet and Why He Hates the Dogme Movement 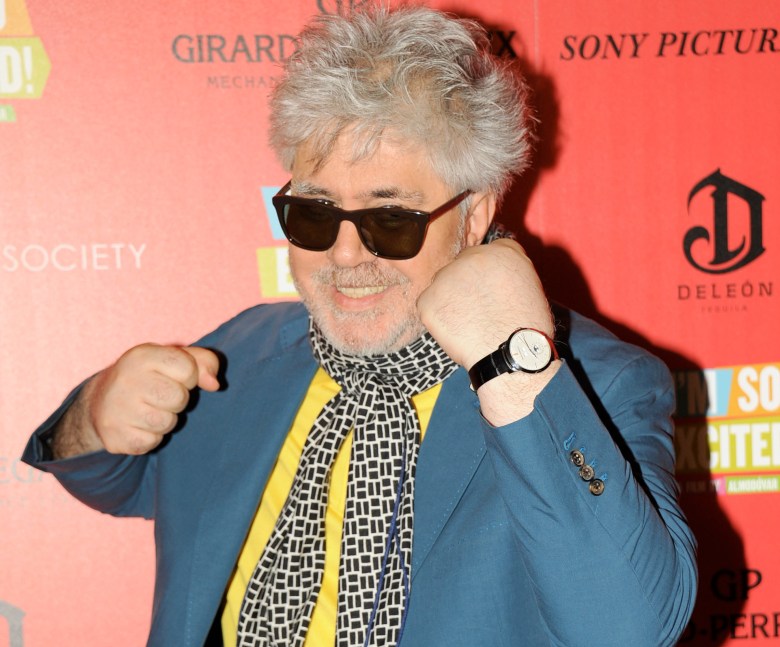 Following what many deemed his darkest effort to date, 2011’s twisted psycho-thriller “The Skin I Live In,” beloved Spanish auteur Pedro Almodovar is back in theaters this Friday with “I’m So Excited,” a film that couldn’t be a further removed from the shocker that preceded it. Zany, hyper sexual and fabulous in all senses of the word, the comedy centers on a the crew and first class passengers aboard a flight in trouble, who decide to get wasted and go wild before the seemingly inevitable.

For Almodovar it marks a return to the melodramatic comedies he built his brand on (“Women on the Verge of a Nervous Breakdown,” “Tie Me Up! Tie Me Down!”) and a departure from his recent slate of prestige-y dramatic fare (“Skin,” “Talk To Her,” “Volver”).

I sat down with the writer-director in New York to discuss his return to comedy, the theatrical nature of the scenario, and why he shied away from nudity in the film despite a whole lot of sex.

Was making “I’m So Excited” a deliberate move on your part to distance yourself from the darkness of your last feature?

I mean, I wanted to make “The Skin I Live In,” but also I want to make movies like this one. And I hope that I will be able to make them in the future, too. For me, I don’t know perhaps — and I don’t go to the psychiatrist — I needed that change. Because really, it was a very happy experience with the actors. It was really a party. I mean, less for me, because I have to pay attention to many things, but it was fantastic to see that for the actors, it was really a big party. It’s always a good experience if everything goes well. But I don’t know if I needed to liberated from the dark side of my career. But I enjoy very much when I make a noir or a thriller or a horror movie like “The Skin I Live In.” And I also enjoy very much this. But I don’t want to abandon this part of my character. This is how I started in the eighties. And it’s exciting to discover that you still have that tone, that you can tune it and you can connect with humor like you did thirty years ago. 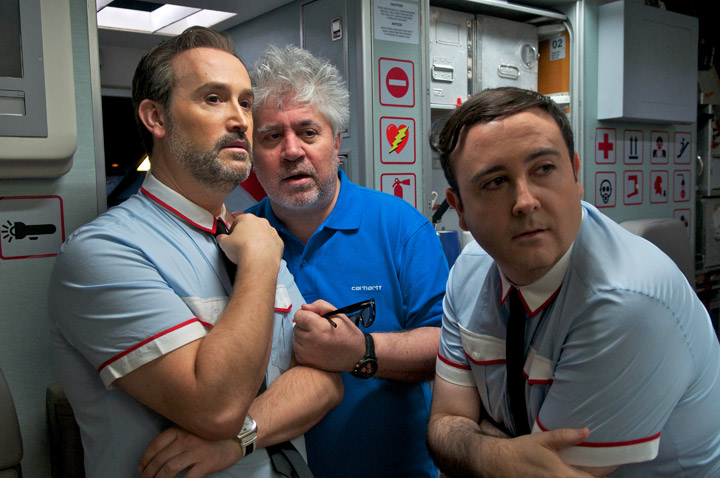 About connecting to the humor of your earlier work — was it tough tapping back into it?

Not at all. It felt exactly like when I was in the early eighties, not because I wanted just to sit down and say ‘I’m going to be just like thirty years ago.’ No, but I remembered perfectly in myself building this character. It’s good to discover that you are the same, but also you have the same capacity to joke.

The only thing is that to make the whole movie, the hard part about writing this is to actually build a narrative that coheres. It’s very easy for me to build, and I’m good at building, these situations, these sort of set pieces around the characters’ personal lives and how they reveal them. But the challenge really becomes how to actually build a base that is going to connect them all, how to develop characters that are going to be coherent throughout the entire narrative. And that in the end becomes the challenge.

I discovered that it was a story about free uncertainty — that I didn’t know at the beginning. We discovered a lot through rehearsal with the actors, which was a lot of fun. We improvised very quick, like I did in the old times. So in that sense, I didn’t change at all, even though I’m an older man, thirty-three years more. It’s good to discover that this part of you is still there.

The film is inherently theatrical given its confined setting and cast of colorful characters, so the fact that you rehearsed only seems natural. Do you typically rehearse prior to shooting?

Specifically for this one it is absolutely necessary, because this is, as you said, a very small location. It’s a small room, and many things happen there and with many people. I mean, I at least don’t know how to go to the set and immediately say put the camera here or there, because then you put it here and you don’t see anything because the seats are this height.

I used to rehearse a lot during the pre-production, basically to adopt the characters to the actors. And also, yes, to listen to them, because then I change part of the script just listening to the actors. But in this case I made, we actually did practice. We actually set up chairs or seats in the space that I was going to be using and we rehearsed the entire film. Almost like a choreography, like planning out the choreography of the actors.

In other films I do rehearse, but not in such as exhaustive fashion like this one. In this one in particular, I really needed to get the timings of when the characters were onset or offset, how they were moving within the small space, and then I would go look at the actual set and try to figure out where I would situate myself, because of the size of the seats my view could be blocked from certain spaces. So it took a lot of practice and a lot of rehearsing. 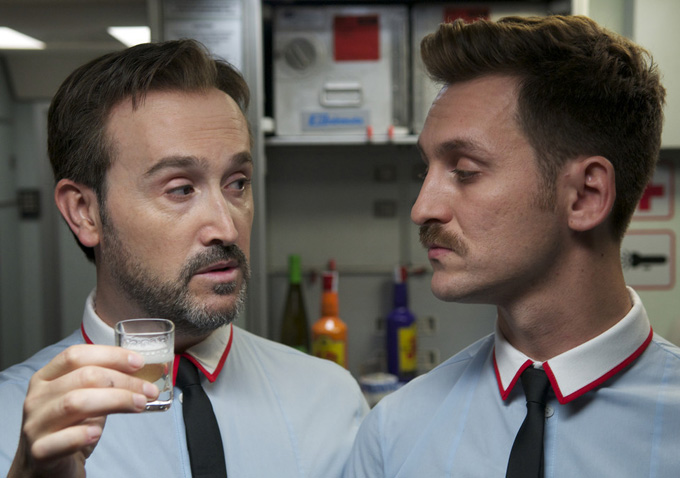 The film feels very open and alive despite its theatrical trappings. Did the challenge of making it cinematic appeal to you?

I’ve never done theater, so if I’m going to have any sort of directorial vices, they’re not going to be theatrical because I’ve only done cinema. So you also have to forget about the fear that it’s going to look theatrical. On the other hand, once you’re shooting, it is the rhythm of the editing that is immediately going to make it more cinematic. You have to really pay attention to the ways in which a particular take remains alive, even if characters are moving within the frame, you want it to still be palpitating, alive in some way. And once it starts to sort of die out, you want to make sure that that’s where you cut and move on to the next scene.

So for example, you take the scenes in the galley that is a very narrow space, and you sometimes have three characters or four characters, even five characters, all crammed in there. It turned out during the post-production process that really it was the longer shot that kept most of the rhythm, because you could see the reactions of the other characters versus using, say, a shot-reverse-shot pattern. So you know, it has much more rhythm like that than if I put the close-up or the reaction on all that. In a classic comedy, like this, it works much better if you see all of the actors together.

And what I hate and I didn’t do, because this is also one possibility, is just to be from one to another with the camera, you know, very quick, very Dogma style. I hate that. I mean, I admire the inventor, I admire Lars von Trier very much…

It’s just not for you.

It’s not for me, but also it’s tiring for him. I mean, he has a unique quality. He’s kind of old-fashioned to be modern. I don’t want to direct him, he’s very good [laughs]. I’m dying to see “Nymphomaniac.” But what I hate is just the followers of this type of filmmaking. It’s cheap.

I don’t know how much money you had to work with, but “I’m So Excited” looks fabulous with great production design and costumes. I was so happy to see a film of this scale with gay characters at the forefront and a ton of sex. I doubt a film like this could be made in America. 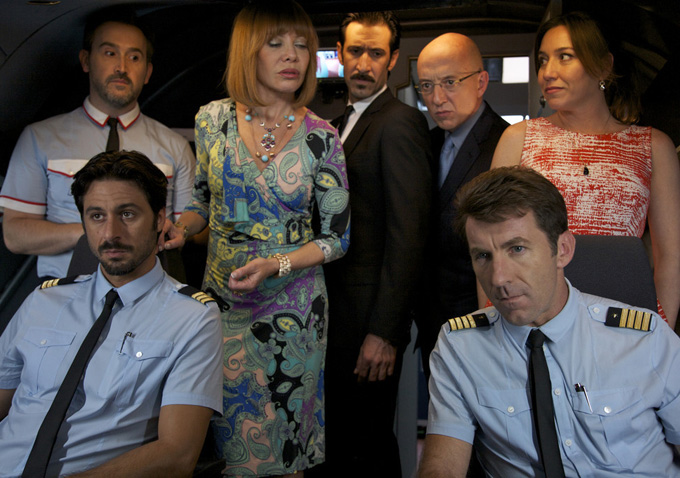 You don’t think so?

No. I haven’t seen an American film of this scale deal with sexuality so outright and with such irreverence.

What about “Behind the Candelabra”?

Well, it got a theatrical release in Europe but in the U.S. it’s only playing on HBO. Steven Soderbergh has gone on the record saying no Hollywood film studio would make it.

What do you make of that?

On the one hand I want to be free. According to me, this is really the first gay movie, or the gayest movie that I’ve made. In all of my films there are many homosexual characters, but if you look at them, they behave like someone else. In this case, this is the first time I’ve wanted to put very flamboyant gay characters, very ‘queeny’ ones at the forefront. I even wanted in some ways to make a case for that flamboyant, feminine, hyper sexualized aspect of homosexuality, that even by some sectors of gay culture, is looked down upon.

In Spain, something that’s not very spoken about is the bisexual figure. The figure is in some ways invisible in Spain, although in my experience there are many bisexual persons in Spain. I was also very much interested in a character who had a family, and also has a lover. That family is spoken about naturally, like a real family. They exist! Those were also very important elements I wanted to talk about.

It’s really a shame a shame that Hollywood just makes films about superheroes, or prequels/sequels. It’s a serious shame, given how creative they were in the past.

Have you received any sort of criticisms about how you portray the three lead gay characters as flamboyant individuals?

Not in Spain but in France, yes. I got some question like, ‘Why are they that way? They are cliches.’ And I said, ‘Honey, they are not cliches. They exist.’ The new gay guys, it seems to me, in France they are Leftist which is good, but they don’t like the flamboyant types. They hate that. I had one or two interviews with gay journalists who asked my opinion on this issue, and I said it’s a form of prejudice. There is prejudice within gay society.

Also everything in the film is so heightened. If the gay flight attendants were subdued they wouldn’t fit within the world of “I’m So Excited.” I mean everyone wants to get laid — gay, straight, bi… 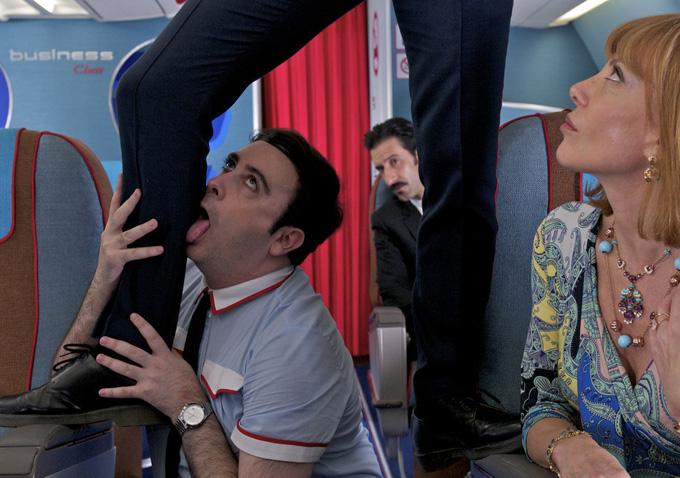 This Article is related to: Features and tagged comedy, Interviews, Pedro Almodóvar, Sony Classics, The Skin I Live In