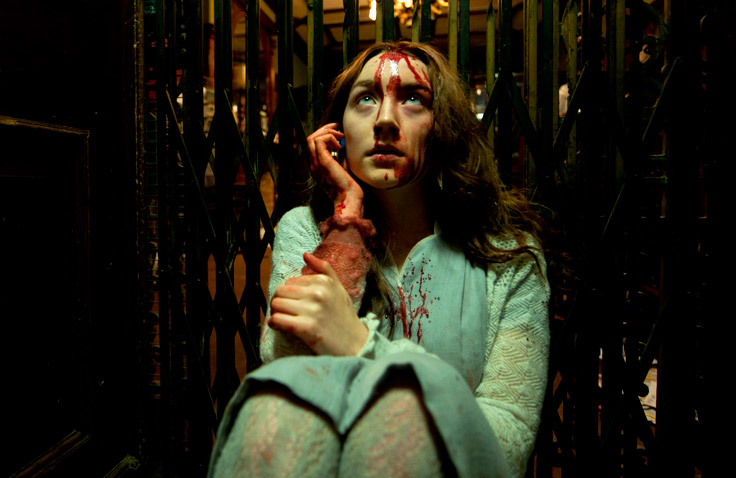 Contemporary cinema has featured a fair share of young, attractive vampires in recent years, but Neil Jordan’s “Byzantium” stands out for exploring that subject with a mixture of intelligence and gravitas. Based on Moira Buffini’s play “A Vampire Story,” the story follows blood-sucking relatives Clara (Gemma Arterton) and Eleanor (Saoirse Ronan), centuries-old vampires whose precise relationship (sisters? mother and daughter?) is initially unclear. While Clara spends her nights turning a buck at seedy strip clubs and feeding on the occasional overly friendly client, Clara lives a life of solitude that she records in private diaries. Her personal recollections take the form of a solemn voiceover that sets the tone for a movie less interested in the technicalities of vampirism than the tangled emotions it causes.

However, that’s not to say that Jordan doesn’t do justice to the genre. Within the opening minutes, the director turns up the horror dial with a pair of bloody killings enacted by both women, the results of which force them to hit the road. Arriving at an intimate coastal town, the girls quickly settle into their same holding pattern: Clara seduces the gullible Noel (Daniel Mays) and convinces him to let the duo crash at his late mother’s old guest house, which Clara transforms into a brothel. Eleanor, trapped in the body of a 16-year-old, quietly enrolls in the local high school, where she attracts the affection of Frank (Caleb Landry Jones) and struggles to keep her true identity a secret from him.

A welcome inversion of the gender dynamic in the “Twilight” franchise, the romance between Frank and Eleanor catapults the movie into its central conflict. While the narrative’s allure is stymied by dull flashbacks to Clara and Eleanor’s 17th century origin story, just when “Byzantium” starts to drag it regains some urgency by raising the stakes (no pun intended) with the arrival of two shady vampiric men from the women’s past, a reminder that they can never grow too comfortable.

With creepy supernatural details injecting this dreary coming of age tale with the qualities of a grim fairy tale, “Byzantium” works as a gothic companion piece to Jordan’s previous movie, the mermaid fable “Ondine.” While far more delicate in terms of subject mater, “Ondine” maintained an elegant mood also visible in “Byzantium,” which hovers in an atmosphere of alienation association with life on the lam.

The bleak noir proceedings are complemented by effectively dour performances. Arterton is competent in the vampire seductress role aptly described by one character as “morbidly sexy,” but it’s Ronan who truly expands on her paradoxical ability to appear simultaneously fierce and eerily subdued, a talent she first displayed in Joe Wright’s “Hanna,” where she also played an uncertain superhuman frantically seeking an exit strategy from her beleaguered existence. Buffini’s screenplay gives enough sharp definition to Ronan’s character for her to endow “Byzyantium” with a lasting appeal even when the ingenuity of the plot bleeds dry.

By the standards of Jordan’s earlier films, “Byzantium” is unquestionably a minor achievement, but its technical specs help flesh out a thick environment that elevates the proceedings to a lyrical plane. Cinematographer Sean Bobbitt (“Shame”) emphasizes the sharp redness of blood in an otherwise shadowy world often tinted by yellows and greys, while Javier Navarrete’s downbeat orchestral score roots the story in the baroque traditions of the period from which the two lead characters hail.

This cinematic framework is complimented by Eleanor’s introspective narration, described by a teacher who discovers youthful vampire’s writing voice as a fusion of “Edgar Allen Poe and Mary Shelly as a child.” That’s an accurate summation of the qualities that allow “Byzantium” to take a familiar scenario and make it a lot more interesting than marketplace standards suggest it could be.

HOW WILL IT PLAY? IFC Films bought the film after its Toronto premiere for an estimated $2 million, suggesting the company has high hopes for its prospects — the genre ingredients are a plus for VOD, and Jordan has strong arthouse draw as the film hits theaters in limited release as well as VOD this Friday. However, devoid of A-list stars and destined to face mixed word of mouth, “Byzantium” is still a challenging release during the crowded summer season and its long-term prospects are questionable.