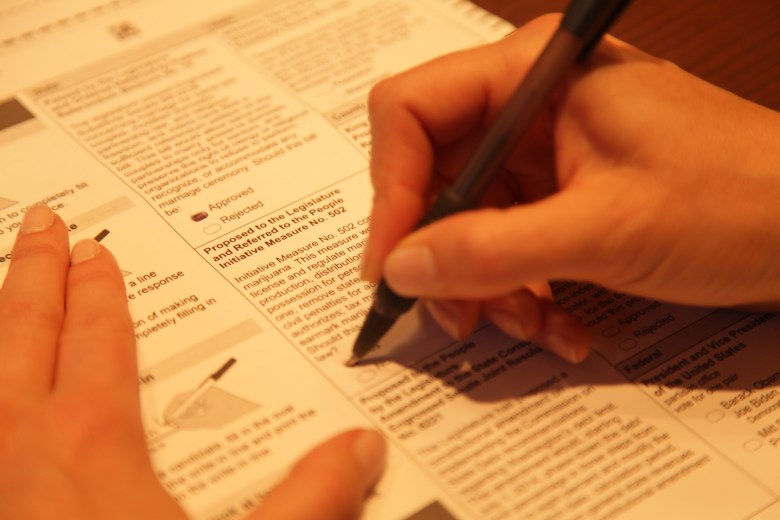 Last fall, the passage of I-502 — the ballot initiative that legalized recreational marijuana usage in Washington state — attracted national attention. “Evergreen: The Road to Legalization in Washington,” a documentary directed by Riley Morton that follows the successful campaign in detail, provides a competent overview of the debates involved in pushing the initiative to the finish line. Despite a fairly straightforward tone, the movie received what will likely go down as its greatest reception during the world premiere at the Seattle International Film Festival last night (unless it lands screenings at the city’s annual marijuana celebration Hempfest, which is featured prominently in documentary). Massive applause and cheers greeted virtually every emphatic statement in favor of the measure. A curious herbal scent was detectable in the aisles. For the moment, “Evergreen” was a victory lap.

But the reality is that the documentary provides something of a prologue to the next chapters in marijuana legislation. “Will Obama tear down this wall?” asks one advocate in the concluding moments, setting the stage for the discussion of federal legalization as well as the implementation of Washington’s new laws. For that reason, “Evergreen” captures a crucial moment in the history of marijuana activism: the moment went plenty of people agree on the general idea of legalization but differ wildly on its specifics.

As a result, the significant dissenting voices in the movie come not from those opposed to the legalization of marijuana but rather the terms of regulation that the initiative set forth. A substantial number of activists argued that the measure, which legalized small quantities of marijuana, would encourage greater persecution of marijuana users — including those using it for medicinal purposes. Sifting through the mixture of voices at various rallies, media appearances and interviews, “Evergreen” provides a case study of what has gradually turned into a national issue through the prism of local tensions.

Through its host of Seattle-based characters, the documentary provides a sober perspective on the marijuana debate. Rather than viewing the cause exclusively through the stoned proclamations of the movement’s base, most of the people featured in “Evergreen” are levelheaded advocates of fair policies. These include ACLU policy director Alison Holcomb, whose support of the initiative stems not from personal desire so much as the conviction that it would improve multiple facets of society virtually overnight. Travel writer and marijuana activist Rick Steves, whose mere presence on the screen led to waves of cheers at the premiere, makes a cogent argument against the persecution of marijuana users without sounding aggressively dogmatic. Even Hempfest director Vivian McPeak, perhaps the one person viewers might expect to preach on the matter, simply addresses the historical progress of marijuana’s place in American culture and the inevitability of the conversations at the center of the movie to fundamentally change the perception of the drug.

Even so, there’s plenty of liveliness to this assemblage, including an energetic discourse of the racial implications of the war on drugs by Reverent Leslie Braxton, who appears on a panel with another advocate bearing a marijuana plant and points out that “if he was black, he’d be arrested.” That “Evergreen” never offers much space for voters completely against any sort of marijuana legalization is beside the point. That’s a difference movie for a different time. “Evergreen” tracks a new age of issues as it collects fragments of conversations in the countdown to election night and its fallout. Concluding scenes hint at the emerging business soon to dominate the marketplace (“cannabis is bigger than corn,” says one suit).

Perhaps because the outcome of the election is so well known, “Evergreen” noticeably lacks tension as it builds to its climax. The absence of suspense results in something closer to a one-sided pat on the back for everyone involved, though it effectively puts forth a whole new set of challenges. What movies will be made about this issue in the next few years — and will give weed-friendly viewers more reasons to cheer? The future is yet to be filmed.

HOW WILL IT PLAY? While theatrical prospects are extremely limited, “Evergreen” seems well-positioned to attract attention from the marijuana activist community and perform well as a digital release.