Sofia Coppola on Her Reasons For Making 'The Bling Ring,' Casting Emma Watson and Getting to Know Paris Hilton 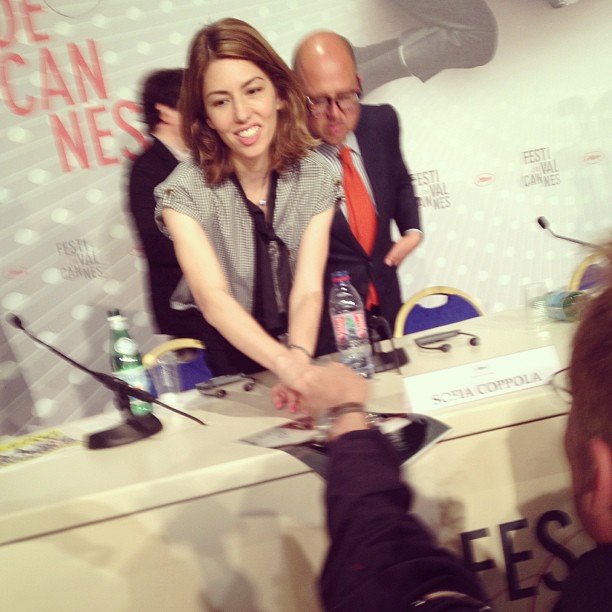 After delving into the vacuous lifestyle of a celebrity in “Somewhere,” Sofia Coppola tackles celebrity anew in “The Bling Ring,” this time from the viewpoint of the teens who idolize them so much that they want to be them. Based on the Vanity Fair article “The Suspects Wore Louboutins,“
her new film stars Emma Watson (sporting an impeccable Valley accent and skimpy outfits that would make Harry Potter
blush), Taissa Farmiga and a string of newcomers (including Israel
Broussard, Katie Chang, Claire Julien and Georgia Rock) as a group of
Southern California high schoolers who infamously stole close to $2 million worth of goodies from the likes of Paris Hilton,
Lindsay Lohan and Megan Fox. Coppola’s film opens with the crew each
recounting the series of events after being found out by the cops.

I called up the soft-spoken Coppola to discuss what attracted her to the story, how her and Hilton (who’s house is featured in the film) are getting on, and society’s current obsession with all things fame related. “The Bling Ring” opens in select theaters today.

You saw this film premiere at Cannes, where you were infamously booed for “Marie Antoinette.” How did this experience compare to the last?

It was really exciting and everyone seemed enthusiastic. It was fun after just finishing it to see it for the first time with an audience and the cast all together at Cannes. 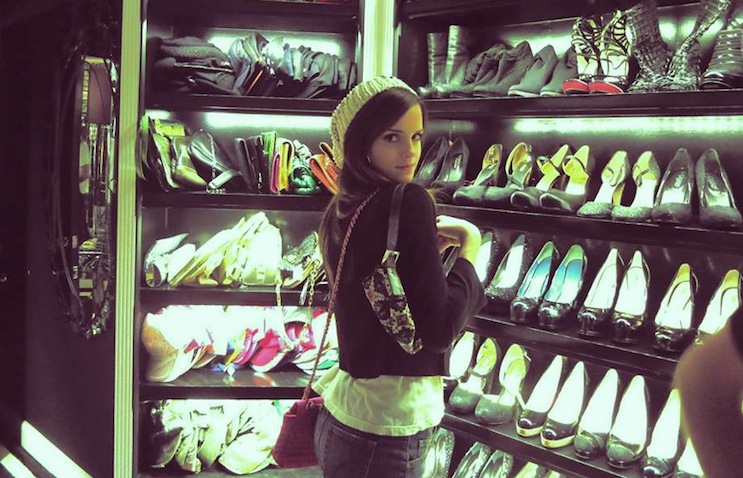 Cannes strikes me as an ideal place to premiere “The Bling Ring” given the opulence on display and the party scene at the festival. Did it seem like an ideal venue for you?

Yeah, I mean I always have such good memories of Cannes. It’s this international festival and it has the “bling” aspect that suited this movie. And yeah, the timing for it to come out is summer — I think it helped bring attention to it.

How much of your own past played into you wanting to take this story on?  You grew up in the spotlight, luckily before the whole online craze erupted.

When I read the story and learned that they were teenagers I did think about how different it was when I was growing up. We didn’t have reality TV or all those websites or the internet. And just the whole idea that anybody could be famous, and everybody is famous. That whole mentality was so different then.

Have you ever encountered folks like the ones you portray in the film over the course of your time in the industry, either in casting sessions or just out and about?

I don’t really know kids like the ones in the story. But we went to LA clubs and stuff when we were working on this; everyone was on their phones and texting and photographing themselves, and I wanted to have that feeling. But no, this world was pretty exotic to me. But then there’s kind of just the universal teenagers getting in trouble and wanting to be part of a group — that part I could totally relate to. 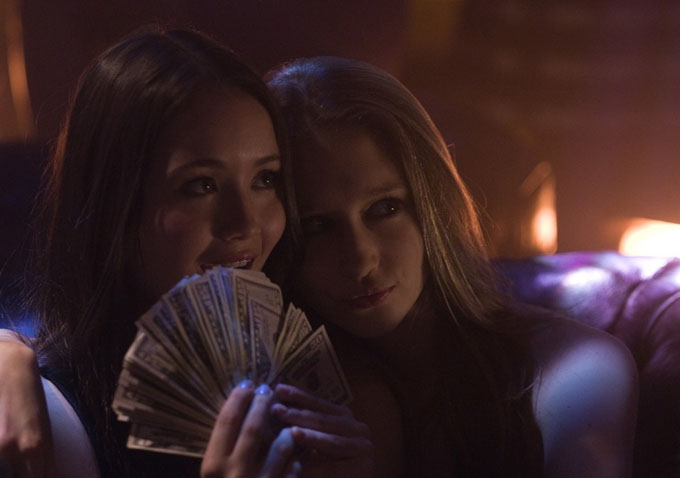 Given that it was exotic territory for you, what did you do with your cast in order to accurately portray this generation?

Well because they’re they’re the age of the real kids, they can relate more to the whole social media side of it. Only Claire [Julien], the blonde, is from LA, so she took them to some high school parties and took them around LA. And the boy, he didn’t know about fashion, so Katie [Chang] taught him about that. You just try to immerse themselves in the stuff that the kids are into.

So it sounds like they played a large part in opening your eyes to that world.

No, it wasn’t… I guess it wasn’t that unfamiliar to me because that whole kind of tabloid culture is so around everywhere that it’s hard not to be familiar with it. But yeah, I guess we immersed ourselves in all that. I know Emma [Watson] watched a lot of [“Keeping Up with the] Kardashians” to get her accent right, and I went to some clubs and stuff.

We all know that our current culture is so obsessed with fame, but what struck me watching this, and what I was so disturbed by, was the fact that these kids were so entitled. They don’t really see anything wrong with robbing the homes of these celebs and thereby invading their privacy. 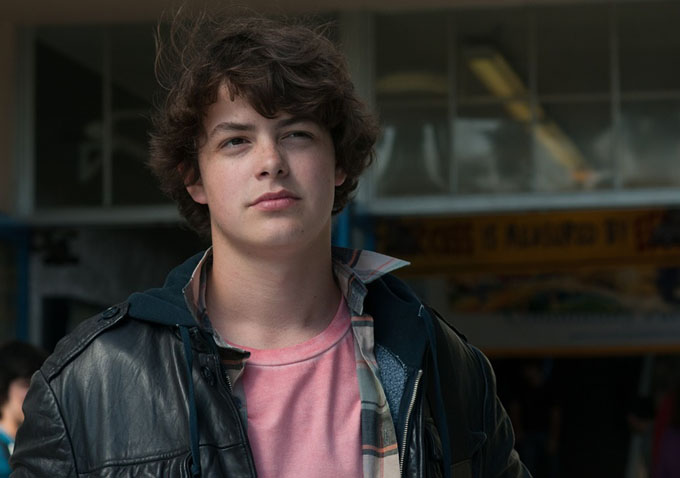 From what I’m gauging, people within the age bracket of the Bling Ring are clamoring to see the movie. How do you feel about people of that age set seeing the film?

I try to make it fun, but by the end, for the audience to experience that and then think about what’s important to them and how they feel about it. So I think it’s good to be self-reflective about that side of how we live in our culture. And I know that kids that see it are into it. I obviously don’t think all kids are like the ones in the movie, the movie is like this really extreme side. And I think we can all look at ourselves — at least I do.

I also like making movies for a young audience because I think they’re smarter and more sophisticated than they’re given credit for a lot of the time.

Did you make this film with an audience in mind?

I wanted it to appeal to that age and then also to people more in my generation, an older generation that are thinking more as parents and things. I just think it’s so in the air and part of our culture that I think it’s interesting to both audiences.

You have kids of your own, much younger than the ones in the film. Did you make this in any way to warn them of the consequences should they choose to go down a similar path as the Bling Ring?

No, they’re not allowed to. My daughter, my six-year-old, would come into the editing room and I’d have to cover her eyes. No, it’s not meant as a warning, it’s really meant to show this story was so kind of unbelievable, to show the slice of that experience that I thought it might be like — and for people to be able to look at it and think about that. But I don’t want to tell them what to think; leave it for the audience to experience it and decide what they think. 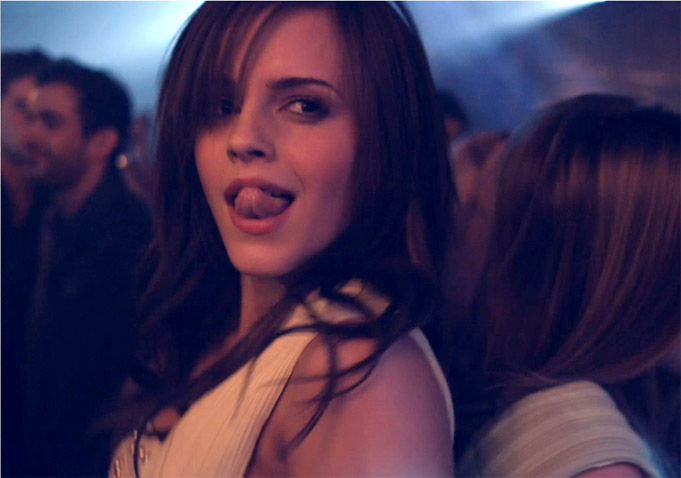 Emma Watson’s a revelation in the film. Did her celebrity factor into you casting her? She could have been one of the targeted celebrities had she had her own place in LA.

I didn’t think of her in that way. I think of her more as this long, hard-working actress from “Harry Potter.” But if anything that was a hindrance. Like, I didn’t want her to stick out from the crowd, so I thought she did such a good job of blending in and transforming herself. You’re not looking, “Oh there’s Emma Watson” the whole time, because that was definitely something I was worried about. But then when I saw her transform into the character I thought she could do it. But I wasn’t trying to make a comment by having a movie star. And I wasn’t thinking of her in the part at all, except for my casting people thought she could do it.

So then what was your reason for casting a bunch of unknowns around her?

I mean at that age, it’s exciting to have actors that you don’t know.There aren’t that many well-known 16-year-old that don’t have a big following. It’s just exciting. I like to see movies where you haven’t seen the actors before. And there’s just a naturalness and freshness to these young actors that are really the age of the kids. So it was exciting to put this group together of newcomers. And luckily Emma could blend in with them.

Paris Hilton, who’s house you filmed in and around, has been joining you on the promotional tour for the film, popping up in Cannes and at the LA premiere. What’s it been like sharing this experience with her?

It’s been pretty surreal. I’m happy that she’s been a part of it. She had shown me security footage of the kids in the house, which of course was upsetting to her, so when she saw the movie she said it was emotional for her to see them in there. But then she got a kick out of when the audience sees her house for the first time and the humor in it. I was surprised that she enjoyed all that. So yeah, it was fun having her be a part of it.

This Article is related to: Features and tagged A24, Cannes Film Festival, Emma Watson, Interviews, Sofia Coppola, The Bling Ring