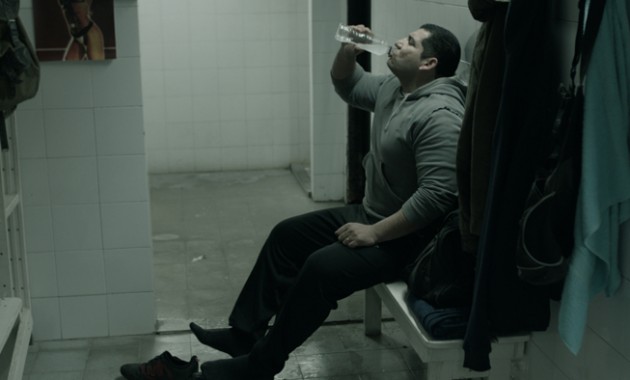 The festival opens strongly, with Argentine writer/director Santiago Loza’s sensitive, engaging drama “La Paz.” In this beautifully modulated redemption tale, Liso (Lisandro Rodríguez) moves back to his middle-class home after being released from a psychiatric institution. He lounges around, and struggles trying to “get his life back.” Liso’s interactions with his parents and various young women are difficult and complicated; he seems to prefer spending time with his grandmother and the family’s Bolivian maid. Rodríguez gives an outstanding performance. His anxiety and restlessness are palpable, right up to the film’s satisfying finale.

Latinbeat also presents a retrospective of Argentinean director Mathías Piñeiro. The filmmaker will be on hand to present four features: “The Stolen Man,” “They All Lie,” “Rosalinda,” and “Viola,” providing viewers the perfect opportunity to discover this fresh, young talent.

While the lineup for Latinbeat offers diverse genres and formats — from animation (“AninA”) to action (“Bring Me the Head of the Machine Gun Woman”) — the most provocative films this year are the intimate and visually daring dramas that emphasize mood over plot. These slow, thoughtful character studies may not contain much overt excitement, but they yield tremendous insights into contemporary Latino life, ranging from complex moral decisions to personal self-worth and family dynamics. Here are five key films that screen at Latinbeat 2013:

“From Tuesday to Tuesday”
An engrossing, slow-burn character study from Argentina, “From Tuesday to Tuesday” marks an auspicious debut from cameraman-turned-filmmaker Gustavo Fernandez Trivino. The film presents a week in the life of Juan (a magnificent Pablo Pinto) — a big, shy guy who pumps iron at the gym, works in a factory, and moonlights as a bouncer. Juan, who lives with his wife and his son, wants a better life. He often says very little, and gives folks like his nagging boss and co-worker withering looks when they verbally try to incite him. A fantasy scene, where Juan head-butts a troublemaker outside a nightclub, illustrates what lies beneath this silent giant’s calm exterior. Yet his true demeanor is revealed when Juan witnesses a crime. This pivotal episode (and its tricky aftermath) will provoke — and even anger — viewers. It also deliberately disrupts the unhurried rhythm of Trivino’s spellbinding film. Suddenly, deliberately, the days in “From Tuesday to Tuesday” get shorter, unfamiliar characters are introduced, while Juan’s plan — and the film’s point — eventually becomes clear. The movie is unsettling, intense, challenging and not to be missed. 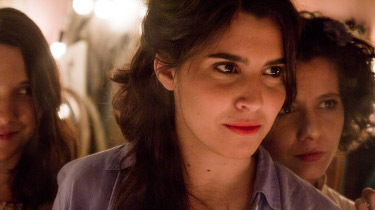 In the hour-long “Viola,” director Mathías Piñeiro delicately eavesdrops on his characters, establishing a marvelous sense of intimacy. A quartet of women perform excerpts from Shakespeare, and blur the lines between reality and illusion as they espouse theories of love and relationships backstage. When two actresses later rehearse a scene — and become more impassioned with each recitation of their dialogue — Piñeiro makes it incredibly seductive. He also creates a similar sensation in the film’s second half as Viola (María Villar), a courier for her boyfriend’s company, meets two of the actresses who unexpectedly dispense relationship advice. This virtuoso sequence, set in a car during a storm with discordant music playing in the background, articulates the themes of identity and love that play out in the film’s superb antepenultimate scene. “Viola” is paired with Piñeiro’s slight and charming 43-minute short “Rosalinda,” which depicts fast-talking actors reciting pages of Shakespeare. Seamlessly weaving in and out of role playing, play fighting, and game playing, Piñeiro deftly captures the camaraderie of these young lovers, especially during a lovely kissing sequence.

“Avanti Popolo”
Michael Wahrmann’s stunning Brazilian film opens with a dazzling eight-minute sequence that prompts viewers to (re)calibrate their senses. The story begins in earnest when Andre (Andre Gatti) returns home to his embittered father (the late Carlos Reichenbach). Andre rummages through Super-8 films and LP records, while Dad — who has lost his dog named Whale — waits with hope for his pet to return. His other son disappeared during the dictatorship thirty years ago. Wahrmann deftly uses static shots to frame Andre’s room and show the isolation and solitude of Andre’s father in the gated space outside. This slow, minimalist drama is interspersed with the Super-8 home movie footage from Andre’s childhood that features him and his brother, and magnifies the nostalgia the characters experience. “Avanti Popolo” culminates in a powerful ending that includes a literally static screen, emphasizing the themes of anguish and revolution expressed throughout this fascinating, ambitious film. Linking history, memory, family, and filmmaking, “Avanti Popolo” offers multiple readings that resonate. 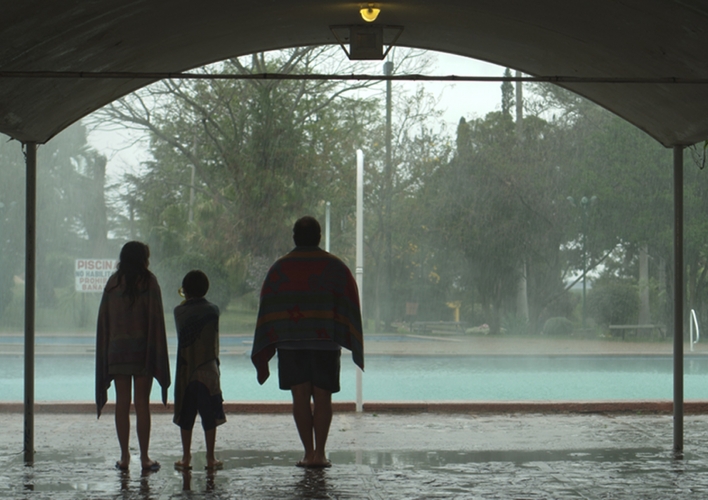 This claustrophobic film — about a lousy family vacation at a Uruguayan hot springs — is about boredom, but it is never boring thanks to co-directors Ana Guevara and Leticia Jorge’s assured hands. The absorbing story unfolds mostly through the eyes of unhappy teen Lucía (Malú Chouza), who is stuck with her divorced father Alberto (Néster Guzzini) and annoying younger brother Fede (Joaquín Castiglioni) inside a bungalow while outside it rains steadily. The dour Lucía cracks her first smile when she plays a prank on her father, but mostly she responds to her dad’s suggestions with eye rolls. “Tanta Agua” develops its plot when Lucía seeks independence, and hatches a plan to secretly meet Santi (Pedro Duarte), a guy whose attention she perceives is a romantic interest in her. How this situation plays out reveals much about the father/daughter dynamic, and makes Tanta Agua an affecting drama. Moreover, the filmmakers coax a remarkable performance out of the young Chouza.

“Señoritas”Written and directed by Lina Rodríguez, this Colombian/Canadian feature is less about “girls” plural and more about one girl, Alejandra (María Serrano). She goes about her life as Rodríguez’s camera (and viewers) follow. Filmed in long takes, Alejandra is seen alone sitting in a car, fixing her hair after a shower, masturbating in her bedroom — and walking, walking, walking. (There are two very lengthy episodes chronicling Alejandra on foot in the night.) These scenes allow Rodríguez and Serrano — who is wonderfully expressive, even when she’s emotionally passive — to convey Alejandra’s adaptable sense of self. The solitary moments are contrasted with her interactions with others: her nagging mother, her girlfriends, and the guys she dates, kisses, and hangs out with. As such, “Señoritas” imbues Alejandra’s experiences with meaning despite the fact that very little happens. It’s a canny approach that gratifies patient viewers.