Review: James Wan's 'The Conjuring' Is Filled With Scares, But What's the Point? 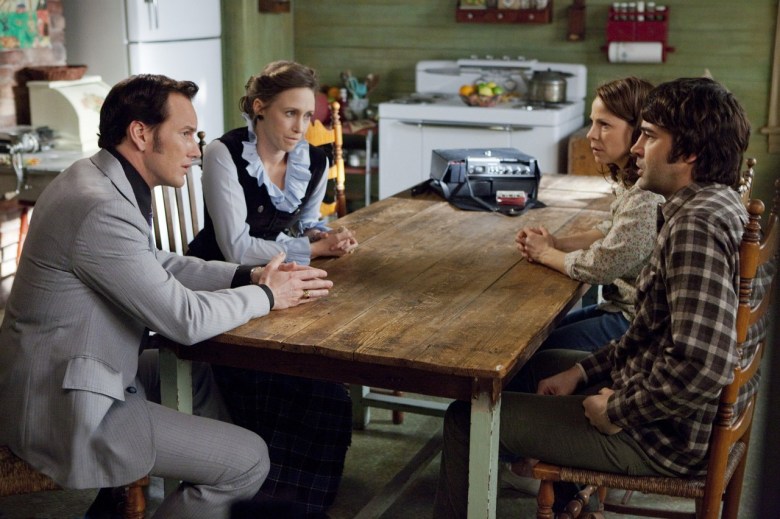 James Wan’s “The Conjuring” starts out with a terrific sense of place: Before the title credits roll, the movie establishes its pair of real life ghosthunters as if aspiring to become the world’s spookiest documentary. Based on the allegedly authentic incident of demonic possession in the early 1970’s documented by paranormal investigators Ed and Lorraine Warren (Patrick Wilson and Vera Farmiga), the same couple called upon to aid in the purging of evil that inspired “The Amityville Horror,” the movie opens and closes with non-fiction ingredients: scrolling text detailing the Warrens’ famous antics and still photographs of the real couple as well as the family whose case forms the center of the film. But that self-serious pose is ultimately disingenuous. Any hints of a smarter agenda serve to cloud the main one: “The Conjuring” has been engineered to freak you out.

The reality basis for “The Conjuring” establishes a tall order: Wan, the director of the first “Saw” installment and haunted house thrill ride “Insidious,” takes great care in the skill of scaring people, but his movies have always featured a cartoonish quality to the way they relentless aim to shock audiences in the most visceral way possible. “The Conjuring” turns that potential up to the max until it grows uncomfortably transparent. It’s not productively scary when you can see the scarer creeping around each corner and waiting for the next big opportunity to catch you off-guard; just exasperating and sometimes even cruel.

Still, Wan remains a thoughtful director whose emphasis on atmosphere during the movie’s leisurely first act sets the stage for a classy thriller in which spooky things gradually creep out of the shadows. But for that same experience, meted out with a finer balance of scares and storytelling, you’re better off watching “Poltergeist” instead. The best entries in this genre inflict the oppressiveness of the haunting onto the audience until it’s clear that otherworldly beings simply can’t be destroyed. Part of the challenge involves making the case that this is serious business. “The Conjuring” launches on that path by gradually establishing a haunted house scenario punctuated with moments of bonafide terror, but once the Warrens begin their investigation, it shifts into silly mode (although Wilson and particularly Farmiga do their best with the material by bringing a grim, clinical quality to the roles).

While Ron Livingston and Lili Taylor effectively portray the parents of the five-girl Perron family, whose problems with a demon in 1971 threaten their lives, once Wan makes that much clear it’s just a matter of time before the entire story devolves into a cavalcade of shrieking phantoms and unseen assailants, slamming doors and howling away. Take a breath at any given quiet moment in “The Conjuring,” because a sudden jump scare undoubtedly lurks mere seconds away.

A few of these jolts work astoundingly well: a pair of scenes in which Taylor’s character plays a clapping game with her youngest daughter, only to receive an unexpected (and largely invisible) third player; the abrupt moments in which a series of family photographs crash to the floor; a sudden nighttime visitor stalking the kids and whispering predictions of their imminent doom. But these elements are countered by a parade of clichés. Chief among them: the kid who befriends a dead child and tells her mother about it with eerie calm, and a loud, violent exorcism that largely plays like a lesser version of “The Exorcism.”

The Warrens’ eventual attempt to cleanse the Perrons’ home echoes the closing act of Wan’s “Insidious,” which had the kooky feel of an old William Castle movie until the a legitimate aura of doom in its climax. Once it sets certain ingredients in motion, “The Conjuring” plays it straight — and the result is a frightening bore. When the movie transforms into an ode to the power of blind faith in supernatural phenomena, it conveys a strange fusion of camp and spirituality thoroughly out of sync with the jarring, in-your-face ghoulishness preceding it. The contemplative turn arrives too late for “The Conjuring” to deepen its aims.

Yet Wan seems to critique the third act failings of “The Conjuring” during the alarmingly superior first half. In an impressive long take that introduces the Perrons as they move into their new home, the director crafts a disquieting world in which the camera itself may represent the perspective of some undefined phantom menace. Echoing the works of the great classic horror producer Val Lewton, who pioneered the slow build involved in generating chills that dig into your skin and stay there, Wan creates the ominous anticipation that anything could happen.

That’s a talent key to the appeal of his movies going back to the minimalist “Saw.” While now working within the studio system (“The Conjuring” is a Warner Bros. release), Wan has maintained a rather elegant approach to genre filmmaking that stands apart from the crassest examples of horror movie manipulation. But in this case, the traps he nimbly avoids catch up to him. The Warrens may know how to handle demonic possessions, but “The Conjuring” suffers from a different invading force: the ghosts of familiarity.

HOW WILL IT PLAY? Warner Bros. releases “The Conjuring” this Friday and seems poised to do well with it, as it fills the gap for a meaty summer horror movie. Anticipating as much, the studio has already instigated plans for a sequel.