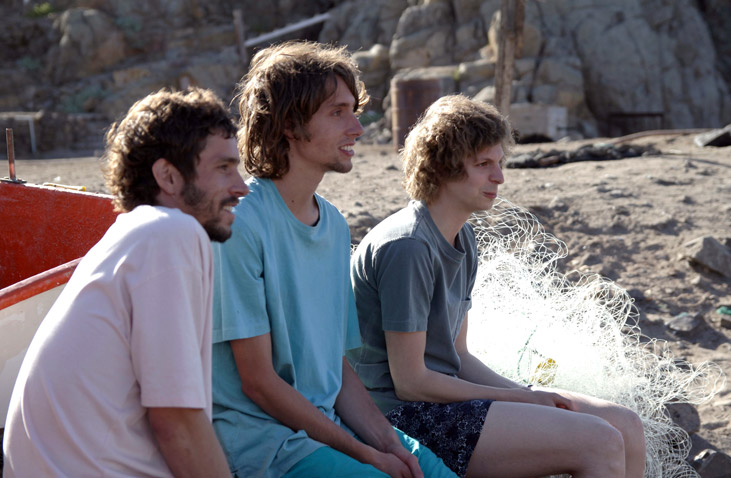 The comedic styles of Chilean director Sebastián Silva and Michael Cera couldn’t have less in common. Silva, whose talent for dark humor became evident with 2009’s Sundance award winner “The Maid” and further solidified with 2010’s “Old Cats,” probes the shadowy regions of domestic life and elevates them to absurd heights. For Cera, whose understated delivery has been ingrained in American pop culture since the advent of “Arrested Development,” every aside comes across like a punchline. Silva unearths humor where appearances would suggest none exist; Cera always seems on the brink of delivering a neurotic joke.

“Crystal Fairy and the Magical Cactus and 2012” — or, if you prefer, just “Crystal Fairy” — one of two collaborations between the filmmaker and star that premiered at the Sundance Film Festival in January (the other being “Magic Magic,” which still has no U.S. distribution), showcases this inherent dissonance: While sometimes quite funny, the movie ultimately features a losing battle between two distinct narrative impulses, both intermittently engaging but together at odds with each other. Cera stars as Jamie, a pleasure-seeking young American traveling through Chile and hanging out with a group of locals (played by Silva’s brothers). While plotting to drive out to the northern desert and imbibe the hallucinogenic San Pedro cactus, Jamie and his friends attend a raucous houseparty, where the inebriated traveler meets a carefree flower child who calls herself Crystal Fairy (Gaby Hoffman).

Under the influence, Jamie jumps at the opportunity to hit on a fellow American and inadvertently invites her to join them on their trip the next day, a decision he immediately regrets once morning hits. Through sober eyes, Jamie finds Crystal to be an annoying hindrance to his ideal drug-fused vacation, and constantly rolls his eyes at her hippyish attitude. At first intent on leaving her behind, Jamie eventually gives into pressure when the benevolent Silva brothers accept their new companion, trying to cope with her effusive personality.

But as Jamie’s cruel, self-serving attitude continues to encroach on their situation, it eventually reaches a breaking point. Resorting to thievery in a small town to obtain the cactus for the group, Jamie’s foolish commitment to their goals repeatedly leaves the Silva brothers (only one of whom speaks English) agape, while Crystal makes vain attempts to befriend him.

Cera is typically hilarious throughout the movie, his meandering delivery constantly revealing the character’s insecurities; although he’s practically too likable for such a sleazy character, he earns our contempt. Initially, Jamie is a giddy adventurer eager to trip out and run wild, expressing his adoration for Aldous Huxley’s mescaline account “The Doors of Perception” and hoping to encounter similar revelations about himself (especially, he adds, because he’s into “phenomenology and stuff”). But even as he’s willing to dive into that new experience, Crystal brings out his harsher side.

Soon, he’s admonishing her for running around naked in their shared hotel room and recoiling at her hairy armpits. Hoffman’s admirably passionate delivery goes great lengths to provide Jamie with his ultimate foil. Frequently baring all and never quieting down, her tendency to get a rise out of Jamie provides fodder for an enjoyable mismatch that never fully develops.

Silva’s expert direction, aided by Cristián Petit Laurent’s handheld cinematography, creates an intimate feeling that lends a loose feel to the proceedings. That’s fine until “Crystal Fairy” encourages the expectation that its scenario will go somewhere other than a shrug of resolution. Instead, as Jamie’s mean-spirited regard for Crystal creeps toward an inevitable confrontation, the movie loses momentum.

In Silva’s earlier features, domestic issues gradually build to an explosion of violence and miscommunication, but in “Crystal Fairy” the tension diffuses in a series of random, half-formed events and revelations. As with “The Maid” and “Old Cats,” with “Crystal Fairy,” Silva effectively implies shifts in the attitudes of his characters without overstating their arcs. However, it has little to say beyond Cera’s capacity to transform into an amazingly uncomfortable screen presence, but we already knew that from everything else.

HOW WILL IT PLAY? With Cera’s visibility relatively high due to the new “Arrested Development” season and a memorable cameo in “This Is the End,” his profile and some warm reviews should help the film perform well in limited release and particularly strong on VOD.

A version of this review ran during the 2013 Sundance Film Festival. Sundance Selects opens “Crystal Fairy” on Friday.