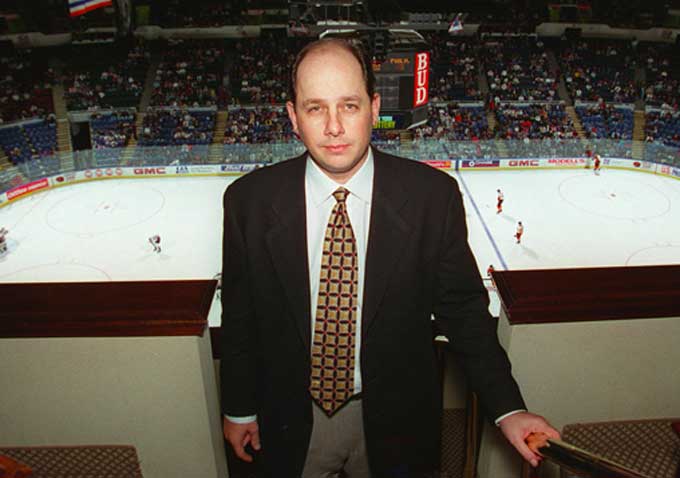 ESPN had two main focuses in its presentation at the TCA press tour today — ESPN Films continuing documentary series “30 for 30” and Keith Olbermann, who recently rejoined the network to host a late-night show.

“30 for 30” is now in its second round of sports-centered docs. The Peabody-winning series returns for six weeks of new films starting on October 1st, and will be continuing its current run through 2014. Two of those six new films were represented at TCA by their directors — “Big Shot,” the doc about John Spano, the con man who attempted to buy the New York Islanders in 1996, directed by Kevin Connolly (yes, “E” from “Entourage”), and “This is What They Want,” about tennis player Jimmy Connors’ 1991 run, directed by Brian Koppelman and David Levien (“Solitary Man,” “The Girlfriend Experience”).

Discussing the overall series, ESPN Films VP Connor Schell noted of the types of stories they strive to tell that “We try and strike that right balance between nostalgia and discovery. These two stories are the perfect mix of those two things. I remember Jimmy Connors’ epic run at the ’91 Open. For a whole generation of ESPN’s audience, that’s completely new. This happened 22 years ago, and for our key demographic of men 18-34, they may not even have been aware of it. We try really hard to find these moments in time when sports intersect with culture.”

Speaking of “Big Shot,” which premiered at Tribeca earlier this year, Connolly admitted that the story was partially personal. “Growing up on Long Island, it was a story that I jumped at the opportunity to tell, the Islanders being my hometown team and hockey being my favorite sport.” Spano’s story was interesting to him because “he wanted to be a star, more so that be rich.” At first, Connolly continued, he approached the story from the perspective of a devoted Islanders fan, but gradually came to see his subject as a person: “I just wanted to give him a fair shake. I never wanted to make a ‘Dateline’ episode — even though it’s my favorite show in the world.”

The process wasn’t always smooth. “He definitely didn’t want to tell his story,” and “we said really horrible things to each other. He knew that there would be some unpleasant things discussed. I can’t leave that out of the story, I wouldn’t be doing my job.” “There were things that we would have rather not been in there,” Connolly concluded, saying that despite some grumblings from Spano, “he didn’t ask me specifically to take anything out of the film. He denied a couple things, but that’s what he does.”

As for Connors and “This is What They Want,” Koppelman pointed out that he and Levien had personal ties to the story as well: “Dave and I grew up 20 minutes away from Flushing Meadows.” “We were fascinated by Connors,” he said, describing him as “a guy who was the first person who wanted to be a heel in professional tennis.” “Connors was a guy you either loved or loved to hate,” added Levien, and they were interested in a late successful moment in his career that took place when he’d “reached an age when most of us are happy to enter our weekend warrior phase.”

Addressing that fact that “30 for 30” has been weaker in covering stories about female athletes (such that they added a new line of docs, “Nine for IX,” that were also by female filmmakers), Schell admitted that they look for “stories that are first and foremost interesting to our audience, but not shying away from telling stories about women. We’re now done 50 episodes of this series. We don’t really chase stories, we really try and find talented people who we can work with who are passionate sports fans.”

That said, there is a female-directed, female-centric doc coming up in the new set of six — Nanette Burstein’s film about Tonya Harding and Nancy Kerrigan. “To date, Nancy Kerrigan has not done an interview for it,” Schell noted. “We’re still working to get Nancy, and hope that by November we do. Several people close to her have done interviews, and we continue to have a conversation with her and her husband about sitting down.”

August 26th is the date that Keith Olbermann will make his return to ESPN with late night series “Olbermann.” He was charming and genuinely cheery when addressing the press, while noting that a recent New York Times story claiming he was contractually forbidden from talking politics on the new show was incorrect. “I’m not intending to talk about politics — certainly not in the partisan sense — for the simple reason that it’s a sports show. I’ve done and enjoy and own the work I did in politics and news, but that’s not what this is.”

If something comes up within a legitimate sports scope, he allowed, it could show up on the show, but otherwise “it’s been wonderful not talking politics… It wasn’t a hobby that I had, it wasn’t a mercenary activity that I had, but it was a lot of work and it took a lot out of me, and it was not often that much fun, so the opportunity to go back… I had a lot of fun doing ‘SportsCenter.'”

He did announce that he was planning on bringing his “Worst Person” segment to “Olbermann” — the “Worst Person in the Sports World.” And when someone asked his thoughts on New York City mayoral candidate Anthony Weiner, he said “I think that he stole a great fake hotel sign-in name that I would like to have used. The idea that anyone could call themselves ‘Carlos Danger’ is a tribute to something about him… I guarantee Carlos Danger will end up in the first show of the new series.”