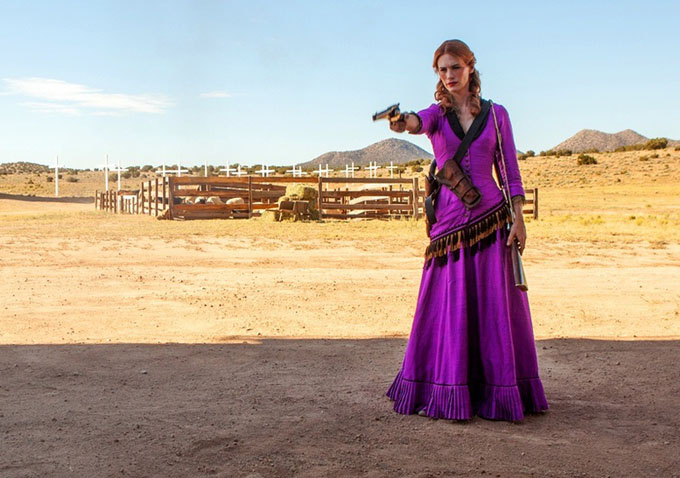 After premiering at Sundance back in January, an official trailer for “Sweetwater” has finally made its way online, promising plenty of pulp in its depiction of unrest on the 19th-century Western frontier. The film stars January Jones as Sarah, a former prostitute living on the New Mexico plains with her husband Miguel (Eduardo Noriega), who are both having to deal with overbearing landowner and religious fanatic Prophet Josiah (Jason Isaacs). When Josiah has Miguel killed, Sarah takes the law into her own hands on an intense journey of vengeance, with a renegade sheriff (Ed Harris) hot on her tail.
Forgoing the propriety and earnestness one might associate with historical depictions, “Sweetwater” seems to be reveling in a more pulpy portrayal of saloon town sex and violence, which should put it more in line with the work of Quentin Tarantino and his most recent film, “Django Unchained.” Fresh off the penultimate season of “Mad Men,” it is a refreshing change-of-pace for the actress go from playing a repressed housewife to a gun-toting woman serving retribution. Although is has been sold to some territories, “Sweetwater” has yet to nab a U.S> distributor or release date, and has already undergone a title change to the more aptly named “Sweet Vengeance” in some countries. Hopefully the trailer will grab enough attention to ensure that the film will eventually land stateside, no matter what format or title it comes in.