Celebrate the 50th Anniversary of the March on Washington and Martin Luther King's 'I Have a Dream' Speech With Nationwide Screenings of 'King: A Filmed Record' Today 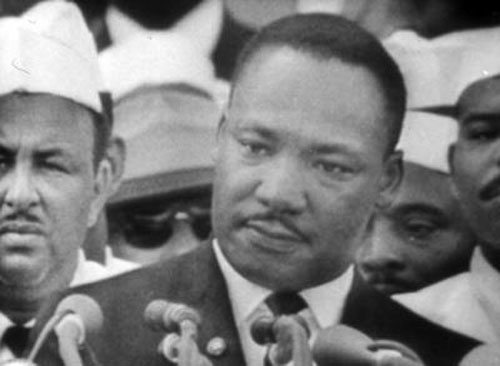 It’s not often that people around the country have the opportunity to watch a restored movie in theaters at the same time, but today brings an especially compelling example that makes for one of the most substantial theatrical events of the year: To commemorate the 50th anniversary of the March on Washington, Kino Lorber is opening Ely Landau’s sprawling Oscar-nominated documentary “King: A Filmed Record…Montgomery to Memphis” for one night only in some 20 theaters around the country, echoing the original single day distribution plan from the film’s 1970 release.

Beyond the obvious historical reasons for the occasion, “King: A Filmed Record” is well worth the price of admission for its artistic strengths alone. Far more than “Lee Daniels’ The Butler” or any other fictionalized treatment of the Civil Rights era, Landau’s collage-like assemblage of paradigm-shifting events from the final years of King’s life transforms history into a vivid, immediate experience.

At three hours with one intermission, the movie benefits from the unique release strategy because it allows viewers to immerse themselves in the passage of time as it relates to events largely compressed by public memory. Though Kino Lorber has already released “King: A Filmed Record” on DVD, it gains additional impact as a theatrical event, since Landau chiefly succeeds at resurrecting the event-like qualities of King’s appeal. The documentary exclusively relies on archival footage from a wide variety of sources, combining them with protest songs of the era to create a complete immersion into the sights and sounds of the time.

Through it all, King emerges less as man than as a uniting force. Though he’s seen occasionally in intimate settings away from the microphone, much of “A Filmed Record” captures the peaceful protests and activist fervor stirred up by his speeches. The only truly stylized component of this unending montage arrives with the occasional appearance of performers — Harry Belafonte, Paul Newman and James Earl Jones among them — recounting words of wisdom from Langston Hughes, Ernest Hemingway and others to add a lyrical depth to the surrounding images of African American unrest. As a result, despite its pure cinema vérité approach, “King: A Filmed Record” maintains a mixture of sorrow and empathy toward the events it depicts, with King’s speeches interspersed throughout like a sort of polemical glue that holds the momentum of the Civil Rights movement together.

The most prominent of these, the famous “I Have a Dream” speech delivered on the steps of the Lincoln Memorial, arrives around the one hour mark, less than halfway through the proceedings, counteracting feelings of triumph by establishing a more radical fighting spirit that defines the scenes in the rest of the movie. As the protests continue, King repeatedly acknowledges the danger he faces, his language growing increasingly biblical as he discusses the possibility of his death (“I have seen the promised, I may not get there with you…”). The narrative culminates with impassioned eulogies for the fallen leader and a funeral march filled with a sea of faces that provocatively mirror those found on the steps of Washington not much earlier.

As Nina Simone’s “Why? (The King of Love Is Dead)” plays out, Landau’s testament to the benevolent rallying spirit emboldened by King takes on an anthemic dimension. By its end, the movie takes on the feel of a cinematic meditation on the dynamic quality of the Civil Rights movement in American culture. But it also carries that dimension into the present with the strikingly modern tenor of the rhetoric heard throughout. “I don’t march because I like it,” King announces at one point. “I march because I must.” And with its final crowd scenes, “King: A Filmed Record” powerfully asserts that the march continues.

“King: A Filmed Record…Montgomery to Memphis” screens at Film Forum and 20 other theaters around the country tonight. For a full list of locations, go here.