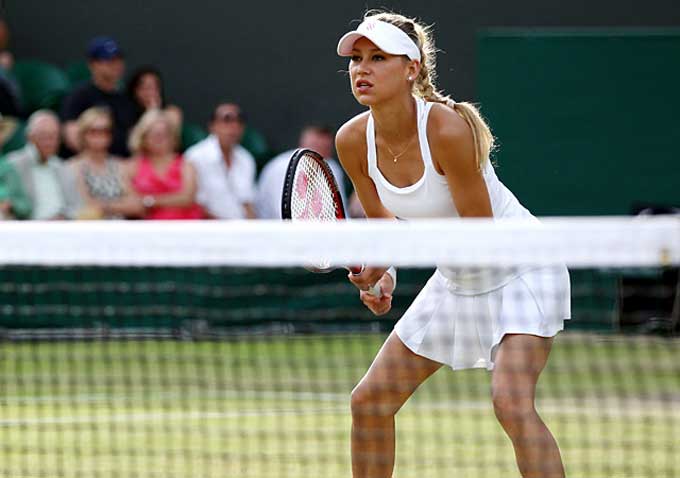 Premiering tonight, August 27th at 8pm on ESPN, “Branded” is the final installment of the sports network’s women-directed and women-focused documentary series “Nine for IX.” It’s also the film that most sharply confronts the conflicted place occupied by female athletes in the media today. The series was created to commemorate the 40th anniversary of Title IX, but as its nuanced capper, “Branded” demonstrates how contradictory perceptions of women at the top of their games of choice can be. We appreciate talent and skill, but they aren’t the only factors that go into stardom, and we prefer to cast female athletes in one of two classic, closed-off categories of appeal. As Mary Lou Retton explains it in her interview in the film, you’re “either wholesome American squeaky clean or sexy vixen. Why do women have to be like that and the men don’t?”

If you don’t fit easily into being the girl next door or the hot chick, “Branded” suggests, audiences don’t tend to flock to your side in the same way, and more pressingly, neither do endorsements. The film’s most cutting example may be the divide between Martina Navratilova and Chris Evert, with Evert explaining wryly that she easily beat her rival on the court in terms of overall earnings, becoming the first female athlete to hit the million dollar mark. “Whether you like it or not, the feminine women athletes, they were the ones who got the endorsements,” she points out, while we watch footage of Navratilova getting booed and being given a makeover to soften her image. It’s an attitude that hasn’t changed over the decades — earlier “Nine for IX” film “Venus Vs.” outlines the resistance Venus Williams encountered for being a formidable six feet tall and African American in a world that’s preferred coltish blondes, and this year’s Wimbledon champ Marion Bartoli was attacked on Twitter for her looks.

Issues of image are prevalent throughout the athletics world, but they’re particularly central to women’s sports because, aside from tennis, there’s a massive pay disparity when it comes to salaries and prize money for women versus men. The average annual salary for a professional women’s soccer player is $25,000, “Branded” points out, while a stadium janitor earns $34,000. Most money comes from endorsements, which means that, no matter how skilled someone is, it’s their lovableness or their lust-worthiness, their marketability that’s most important. Tennis player Anna Kournikova, whose fame stretched far past her record of wins, becomes one of the film’s central figures, though she’s doesn’t appear — instead, there’s footage of her walking out of an interview with a journalist after being asked “Do you consider yourself more of a sex symbol or a tennis player?”

“Branded” makes a strong case for the overall ickiness of how pretty or adorable a female athlete is being more important than how good she is at her sport, presenting for contrast the practical unsexiness of WNBA uniforms versus the Lingerie Football League. But the film also addresses the other side of the equation — the tendency to condemn and call out the female athletes who do use their image or take advantage of their looks, as opposed to the system that supports or demands it. Kournikova’s agent Jill Smoller notes that while her client may never have won a singles title, she was still a strong tennis player, and “she shouldn’t be penalized for being beautiful.” Lolo Jones talks about how, despite being the number one ranked hurdler before the London Olympics, she had no sponsor, and so did research and took to social media to build up her fanbase. Her efforts earned her attention, but also a sneer from the New York Times, who ran a story saying the amount of publicity she received “was based not on achievement but on her exotic beauty and on a sad and cynical marketing campaign.”

“Branded” is directed by Heidi Ewing and Rachel Grady, the documentarians behind “Jesus Camp” and “Detropia,” and while it follows a more TV-standard format of archival footage and interviews, it does feature one interesting stylistic touch — the inclusion of the reactions on interviewees’ faces between or during questions, as their answers play out in audio. The men often offer up sheepish looks or smirks, the women exasperated or entertained ones. It’s a device that makes it clear how aware everyone is of the larger game being played, whether they’ve been able to use it to their advantage or are a part of it. “It’s a white male world, we’re just living in it,” someone notes with frustration but not bitterness — it isn’t news, and neither is the observation that what’s being discussed here is “a cultural issue, it’s not just a women in sports issue.”