Kristen Bell Discusses Her Sexy, Smile-Free Performance In 'The Lifeguard' (and the End of 'Gossip Girl') 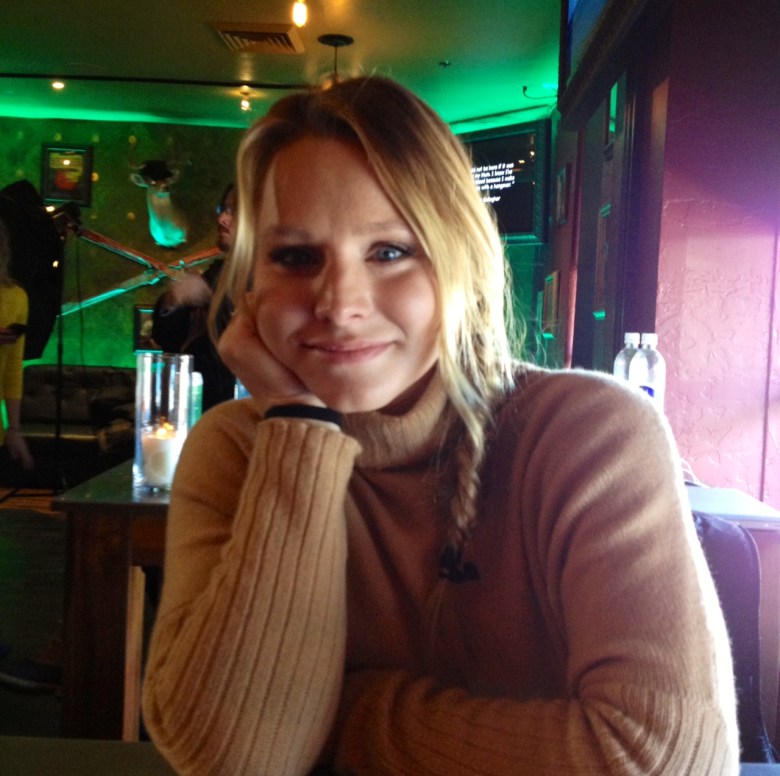 Generally regarded as a master of snark, Kristen Bell made it very clear she’s capable of much beyond that at the Sundance Film Festival this year, portraying  a crumbling, depressive 29-year-old in Liz W. Garcia’s affecting “The Lifeguard.”

[This interview was originally published during the 2013 Sundance Film Festival. “The Lifeguard” is currently available on VOD and opens in select theaters this Friday, August 30th.]

The film — screening in U.S. Dramatic Competition at the festival — sees Bell’s character Leigh quitting her job as a New York City reporter and moving back to her parents’ house in Connecticut. She reunites with her high school best friends (Martin Starr and Mamie Gummer) and romances a similarly melancholic 16-year-old boy (David Lambert).  It doesn’t hold back when they inevitably start having sex: A scene set in the changeroom of the pool definitely stands out as one of Sundance’s sexiest.

A very pregnant Bell sat down with Indiewire a few days after the film premiered, discussing said sex scene, the challenges of taking on a very dramatic role and, yes, her disappointment that despite giving her a literal voice, she didn’t end up actually being Gossip Girl.

How did you get involved in this film?

Liz had sent the script to my agent and asked me to read it. I had previously been familiar with some of her writing and was already a fan. Initially I was just flattered she had taken in an interest in me. I’m very attracted to characters that are going through strange transitional phases. And I found the concept of deciding when your adolescence ends and adulthood begins really fascinating. And I also liked how risky of a writer she was.

I really enjoyed how authentic that transitional phase felt in the film. I’m roughly the same age as your character and grew up in a similar town.  It was easy to relate.

Yes. Certainly it’s relevant in my life as well. Some of my friends started their lives at 23. They started having kids and they were adults. Some of them still haven’t done that. And I’m 32. You know, the lines are so blurry as to when you actually need to become an adult. It all sort of self-discovery. Whereas with our parents’ generation it was very different.

This is a very dramatic, melancholic role compared to most of your previous work. How did you approach that? Were you nervous?

I suppose I was a little nervous. Mainly because it was unchartered territory. I’m used to relying on snark or cutesy stuff. I had to very much drop the veil of any of that and just allow myself to get pretty depressed in this role.

I don’t think you smile once in the entire movie.

I’m so glad you noticed that because that was kind of a deliberate choice. I wanted a project unlike anything I’d ever done before and one of the ways I explained that was saying I wanted a project where I don’t smile for the whole movie. This fit the bill. It’s nerve-racking because you wonder if people are going to think you’re believable. Or people are going to like to watch you do that. Because whether or not you think you’re God’s gift to acting or not, it does depend largely on the audience and what they want to see you do. So I was thrilled that Liz wanted to take a chance on me and that I was able to portray this low level of depression in this 30-year-old woman sincerely.

The chemistry between you and your onscreen BFFs Martin Starr and Mamie Gummer is impressive. What was your relationship like off screen during the shoot?

I knew Martin prior [Starr interrupts the interview by yelling from across the room: “Yeah, you did!”]. But just sexually [laughs]. But yeah I knew him from guest-starring on his show “Party Down.” So I already knew I enjoyed him. Mamie I met on the set but we were very lucky in that the three of us got along as much as those characters. And spent the whole summer in Pittsburgh together acting the same on set and on camera as we did off. We were very lucky and it was a lot of fun.

What about David Lambert, who plays Little Jason, your teenage love interest? You two pull off something very tricky in making the audience — or me, at least — root for a romance that is clearly not in your character’s best judgement.

That was definitely the goal. We didn’t want to make it seem predatory at all. We definitely wanted to emphasize the fact that these two characters were each a little empty and vacant in their own ways and that they were fulfilling something within each other. He didn’t have anyone caring enough to give him any advice or any female energy in his life whatsoever. And my character needed something that made her feel young and alive and beautiful again. It was definitely meant to be portrayed in a more of a star-crossed lover thing than anything lascivious. 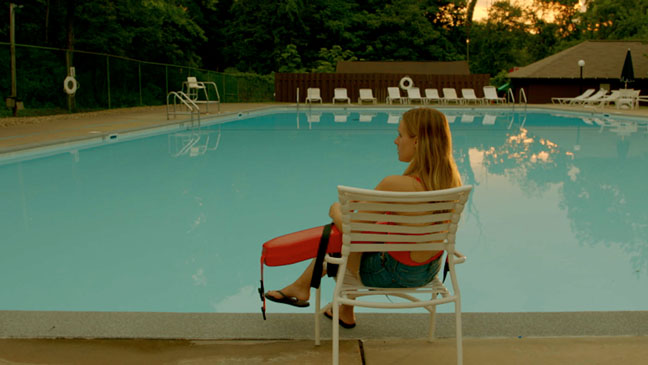 How old is he in real life?

He was 19 at the time, thank god. That was actually one of my questions when we first started because when I read it and Liz had written it as a 16-year-old, I was like “Are we really gonna get a kid who is under 18?” That would make me very nervous because you just never know what they’re doing for the first time. And there’s a reality behind everything in film. I’d love to be the actor that tells you “Oh, you abandon your humanity and you’re just the character!” But that is not the truth. I’m thinking about whether my boobs are showing. I’m thinking about whether this is comfortable for the other person. Or do I need a mint? That’s the reality of filmmaking. You don’t abandon you who are as a human being. Your insecurities don’t dissipate. But David is so interested in telling stories and so interested in being an actor in a lovely way. He did such a spectacular job. He was so present as his character on set and so professional. He was game for us to get as intimate as possible during those scenes. And luckily he’s such a sweetheart that we felt immediately comfortable with each other.

It also must have helped that he’s pretty dreamy. His eyes just melt you.

Oh god, for sure. He has a very intense face. He has these big pouty lips and those beautiful eyes and it just sweeps you away.

Your film is part of a trend at this year’s Sundance. A lot of films have featured older women with younger partners: “Two Mothers,” “A Teacher,” “Concussion”… And like your film, all of these are directed by women.

I’ve heard  a couple times here that there are similarly themed movies to this one, which I think is just balancing the scales a bit. I know one thing Liz has said in her interviews is that she wanted to be very careful with how often she used Leigh’s POV of Little Jason so that it never did come across as predatory. Because often in filmmaking as the director and the DP you have to think about the shots and what they’re showing the audience and how that’s making them feel. Whose POV you’re in will tell them where they’re coming from as an audience. She didn’t want to use a ton of my character’s POV looking at Little Jason so that it didn’t feel predatory.

How many times have you come to Sundance?

I’ve come twice with other films, but I’ve been here five or six times just to like to ski and support other people. Dax [Shepard, her husband] had a movie here last year. So I’ve been a few times.

What’s it like this time compared to others? Other than the fact you’re very pregnant.

Actually, it’s not so dissimilar. I don’t get to ski, which is the bummer. But I feel particularly proud of this project because we genuinely did it for nothing. We didn’t have trailers or anything. We had one van we’d rented from an AVIS or something to get us all around. We all shared a house and I dyed my hair in the sink every couple weeks. It was very much a passion project and I feel very proud that it’s here and being showcased. It’s always nice to be around a bunch of people that really like film.

What are you working on now?

I’m currently shooting the second season of “House of Lies.” We have like three weeks left, I think.

Are you doing lots of shots where they can’t see your belly?

I’m always sitting at my desk. They don’t show it. But they also have this post-production master on set that is able to take it out. He advises us as to the wide shots to do so he can flatten out my stomach and I don’t look so porky.

This might be annoying, but what did you think of the last episode of “Gossip Girl”? I mean, how is Dan “Gossip Girl” if he has your voice?

Exactly. I see the episodes six weeks in advance. So I did have quite a bit of collateral to hold over my girlfriends heads that did watch it.  I was like, “I know who ‘Gossip Girl’ is, you guys.” But I have involvement only in post-production, so I’m not involved in that actual conceptualization of the episodes.  I fully trusted whatever way they wanted to take it. They had much deeper issues and had to settle the score on a thousand different characters and if I did not recieve the title of “Gossip Girl” in the end it would be okay and I would be at peace with it.

Well, it must have been a fun job for those five years.

It was the greatest.

How long would it take?

I was there for about two hours every two weeks. It was nothing. It was very easy and it was nice to see the episodes in advance. Every part about it was fun.

This Article is related to: Features and tagged Interviews, Kristen Bell, Sundance Film Festival, The Lifeguard