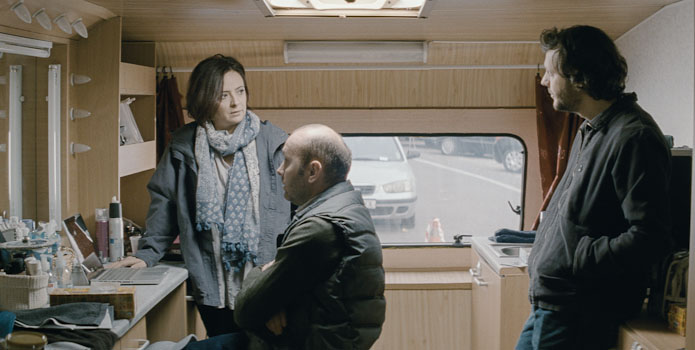 Anyone following trends in world cinema over the past decade has noticed the emerging stylistic tendencies of the Romanian New Wave, which gained a boost of publicity in 2008 with the acclaimed “4 Months, 3 Weeks and 2 Days,” one of several Romanian films to show a penchant for long takes and real time. But while “4 Months” director Cristian Mungiu has received the most exposure, he’s not as definitively Romanian as Corneliu Porumboiu. With his first two features — “12:08 East of Bucharest” and “Police, Adjective” — Porumboiu has excelled at realizing the aesthetic proclivities of the Romanian New Wave in their most distilled form. However, his third movie, “When Evening Falls on Bucharest or Metabolism,” makes the earlier entries look like breezy escapism by comparison.

Exclusively composed of something like 17 shots (some viewers have asserted that it has even fewer), “When Evening Falls on Bucharest or Metabolism” goes down even harder than its unwieldy title. Porumboiu’s self-reflexive narrative revolves around a narcissistic filmmaker named Paul (Bogdan Dumitrache) who engages in a potentially scandalous affair with an actress (Diana Avramut) playing a bit part in his movie. Much of the experience involves discussions of the very techniques that Porumboiu frequently relies on, starting with the first long take that finds the two characters driving around, in which Paul explains the value of…the long take. From there, the layers of narrative get even denser: Two other scenes find Paul rehearsing a nude scene with his actress that eventually unfolds within the context of the actual plot.

Not that there’s a whole lot of other story to consider if you choose to ignore the formalism. Paul gets oddly jealous when a more established filmmaker shows interest in the actress’ apparent resemblance to Monica Vitti, leading to an amusingly passive aggressive dispute where she admits she’s never heard of the actress. In these kinds of small asides, Porumboiu effectively conveys the insular nature of conceited artists lost in their work. However, these observations fail to build to a cohesive whole; Porumboiu shows little interest in using his filmmaking approaches to arrive a satisfactory conclusion. By the time he arrives at a detailed close-up shot of a colonoscopy playing on a computer screen, the sense of mystery and insight hinted at has dissolved.

However, “Metabolism” contains enough moments that reward patience to balance off the eventual teetering off of its strengths. In particular, the curious tension between the two characters taps into the way drama tends to seep into relationships rather than erupt in melodrama. An extensive dinner table scene that starts off with the duo talking about Chinese food eventually turns into a much deeper conversation. The performances are key to making sequences like this hold together. Paul himself is a finely realized creation, the sort of aspiring visionary lost in his pretensions one might find in the cinema of Korean director Hong Sang-soo — or, for that matter, Joe Swanberg.

Yet for those unfamiliar with contemporary Romanian cinema, “Metabolism” is a hardcore immersion into distinctly innovative storytelling. With its constant dialogue on the nature of film language, it’s also a keen demonstration of how movies of this sort can work. That’s sufficient to sustain maybe half of its long takes, but ultimately “Metabolism” is less exciting than watching another similarly executed movie where the work speaks for itself without making excuses.

HOW WILL IT PLAY? A likely inclusion in the upcoming New York Film Festival lineup, “Metabolism” will attract interest from cinephiles who want to keep up on the latest Romanian cinema but seems unlikely to land a theatrical release.