Que(e)ries: The Plight of a Brave LGBT Film Festival In Russia, and How To Support Their Mission 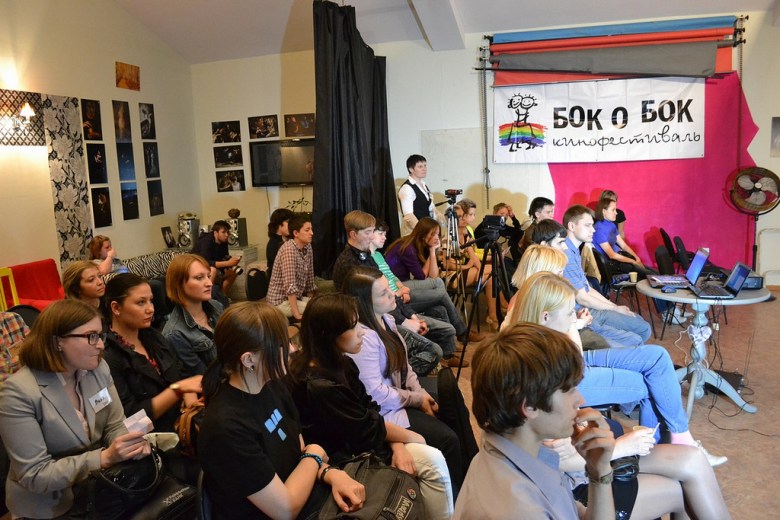 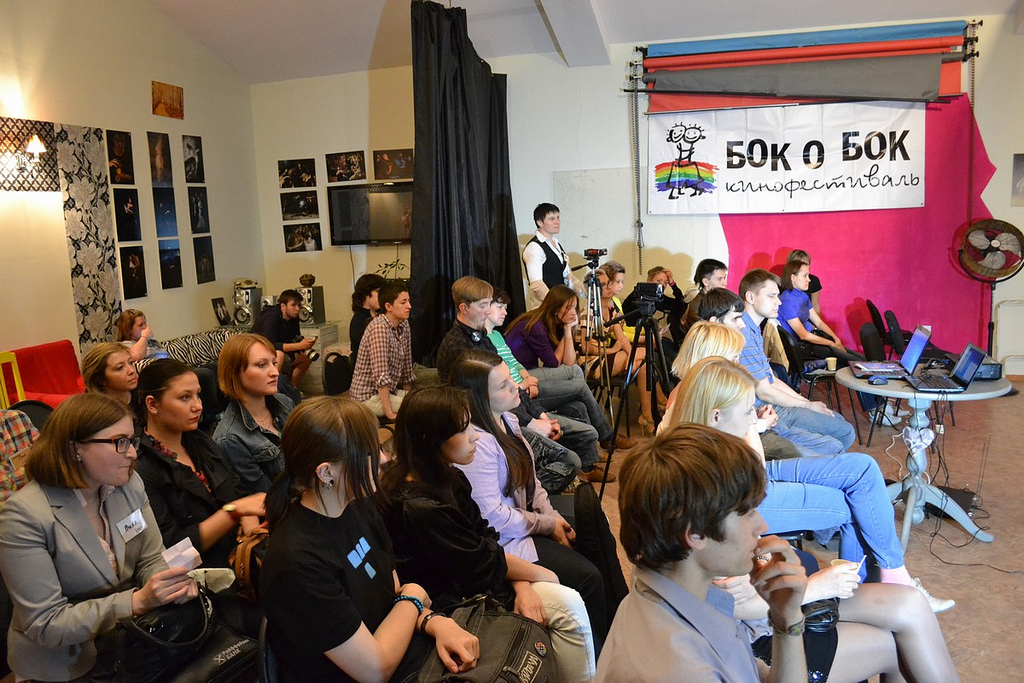 In all likelihood, you’re well aware that the situation regarding LGBT rights in Russia has reached a horrifying state. In large part thanks to the fact that the Olympics are being held there in 2014, a significant (though not significant enough) outcry has been mounting all summer and will surely continue in the six months leading up to the games.

But while it’s definitely a good thing that the Olympics have raised awareness about one of the countless serious human rights battles occurring somewhere in this world, it’s clearly not the only issue or even close to the most important one. Whether relatively LGBT-friendly countries — and organizations within them — boycott the Olympics (which looks highly improbable), or whether LGBT or LGBT-positive athletes who attend the games face persecution or even jail time and deportation are definitely matters to consider. But they are nowhere near as dire issues as the ones facing LGBT Russians themselves, who face violent persecution on a daily basis.

One organization that has fought back is Side By Side, an LGBT film festival in St. Petersburg. Since 2007, Side By Side (or Bok o Bok in Russian) has been working against all odds to bring LGBT cinema, education and community to Russians. And now they need your help.

Back in June, Side By Side was faced with new challenges,  including the law concerning NGOs and their status of being a ‘foreign
agent.’ In relation to this piece of legislation, Side by Side has been
prosecuted under the law and found guilty — both as an organization and Manny de Guerre, its director. This has
culminated in fines of 700,000 rubles ($21,000). Currently, Side By Side are appealing the court decisions, but given the circumstances, things don’t look promising.

“We
believe that the court cases against us were politically motivated and
we have been specifically targeted,” Manny de Guerre told Indiewire in an interview last week. “Checks carried out by the prosecutor
were illegal and evidence was flimsy. Any judge with an objective view
would have thrown the case out immediately. The Russian courts prove
time and again that it is not a place for justice.” 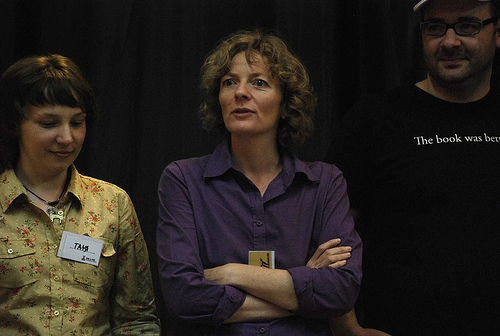 Looking back, de Guerre said she felt urged to start the festival when she realized how little activism was going on at the time, and there was simply not enough places for LGBT people to congregate.

“In Saint
Petersburg, the only places for LGBT people to meet were at clubs where
people perhaps once or twice a week went in order to feel free and
themselves,” de Guerre told Indiewire. “Not everyone however wants to go to a club in order to feel
free, and people need in their day to day life to be able to express and
be who they are without fear or reproach. So the task in hand was — and is
— to change the environment around us, to make it less homophobic and
more tolerant to different ways of living.”

In essence, this was the mission of the festival from the very beginning. De Geurre said that Side By Side is basically trying to create public platforms for discussion with society in order to “dismantle myths and obsolete stereotypes that continue to hamper the development of the LGBT community in Russia.” 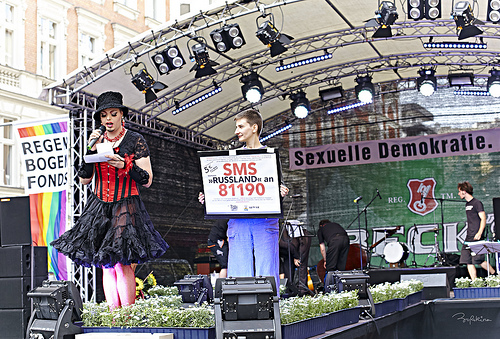 “Through film and discussion we aim to generate positive dialogue, facilitating change and foster respect of human rights of LGBT persons,” de Guerre said. “This approach seems effective. Over the six years we have held 16 festivals and attracted more than 20,000 visitors. 30% of our audience is straight and many write how the festival helps them to understand the issues and be more tolerant towards LGBT.”

This mission and these numbers — in a country where 74% of people believe homosexuality should not be accepted by society — are remarkable. And they have not come easily. In 2008, the festival was banned by the authorities. On the night before the festival began, “Emergency Services” went into the two primary venues and closed them down for alleged fire violations.

“We managed to rearrange events but were forced to conduct festival proceedings at a secret undisclosed location,” de Guerre said. “The first year was a great learning curve. Although it was incredibly
stressful, it prepared me personally as to what lied ahead. In the face
of all these new challenges we always try to remain calm, look logical
at the situation and then implement a strategy for the way forward”

The next attempt to hold the festival was more successful. In October 2009, 22 films were screened along with 10 panel discussions and a closing concert at 8 different venues across the city. deGuerre noted that the festival changed their tactics leading up to this addition, putting on monthly screenings and expanding our coalition of support to consulates, other human rights groups and other festivals. Since 2009, the festival has run “relatively smoothly” in Saint Petersburg, she said. But it’s also begun to branch out to regions, where it ran into more problems.

READ MORE: Click here to help Side by SIde

“In 2010 we also began working in the regions of Russia,” deGuerre said. “We have and are working in places such as Novosibirsk, Archangel, Kemerovo, Tomsk, Perm and Moscow. In many cases when we begin working in a new city we see the repeat of 2008 in Saint Petersburg.”

In total, the festival has been banned by the authorities 5 times: Saint Petersburg (2008), Archangelsk (2010), Kemerovo (2010 and 2012) and Tomsk (2011). And now they are facing the aforementioned charges, not to mention the much discussed new laws against “LGBT propaganda” passed by Vladimir Putin one June 30th. Collectively this threatens both deGuerre and the organization altogether, but no one is giving up.

“In the year ahead we aim to continue working to the maximum extent that we can going forward with our core activities — film screenings, discussions, distribution of information materials, online films, further development of our resources on the website — within those restricted limitations now imposed by the law concerning the ‘propaganda of untraditional relations to minors,'” de Guerre said. “We will try to maintain our public visibility, reach wide audiences and continue to circulate information concerning LGBT rights and issues in Russia.” 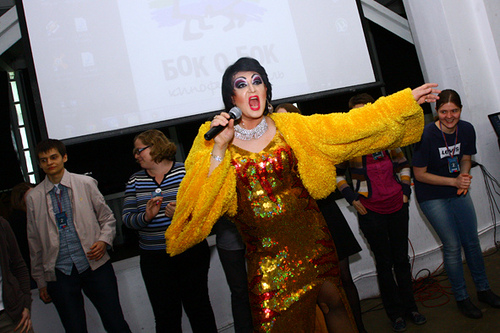 In Russia, there are no clear guidelines as to what propaganda is or to what measures an organization can take, which de Guerre said is a significant challenge.

“Measures need to be taken in order to ensure that we do not break the law,” she said. “Measures already implemented we will continue, for example events being restricted to adults only and all publications clearly marked with 18+. Of course we do not want to have to implement these measures however the fines are horrifically high over $30,000 and another fine threatens the very existence of the organization.”

De Guerre said that people outside of Russia should understand that it is not just LGBT rights, but all human rights that are being violated in Russia right now.

“The process against LGBT and LGBT organizations is part of a much larger general crackdown on civil society and human rights groups,” she said. “The anti-western, conservative rhetoric is increasing by the day and under Putin’s regime there is a real return towards totalitarianism.”

So if you really want to help the people of Russia, boycotting Russian
vodka or Olympic sponsors like McDonalds or just not watching the
Olympics will honestly do very little if anything at all. But donating to an organization like Side By Side or people like Manny de Geurre definitely will, as will passing on the info so that others will too.

You can read more about Side By Side here.

This Article is related to: Features and tagged Activism, Festivals, LGBT, Que(e)ries, Russia