Review: 'Lee Daniels' The Butler' is a Saccharine Civil Rights Lesson -- But That's Why It Works 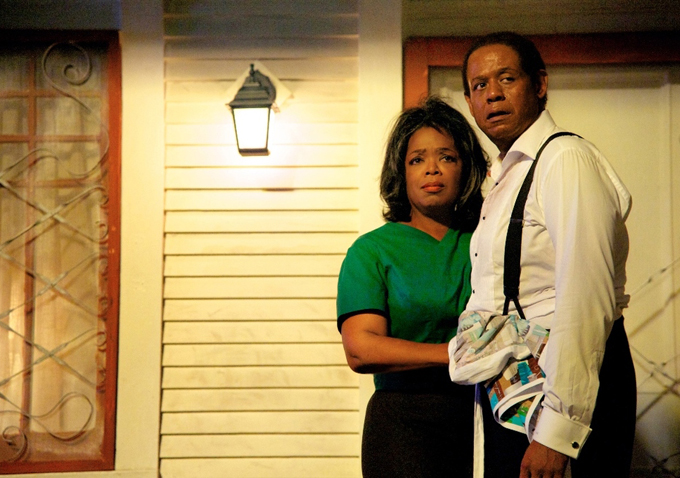 The title was changed from “The Butler” to “Lee Daniels’ The Butler” for legal purposes, but the fourth directing credit from the eccentric filmmaking voice behind “Precious” and “The Paperboy” marks the least distinctive of Daniels’ career. That’s a plus: Until a climax that resurrects the euphoria of the 2008 election, Daniels wisely allows the material to work on its own terms.

In fact, “The Butler” carries an authenticity that sustains it through its cloying stretches. While black presidential butler Cecil Gaines (Forest Whitaker) is a fictional creation, the character’s story draws from the real-life experiences of Eugene Allen, who served through eight administrations from Eisenhower to Reagan. Daniels portrays Gaines’ life in a straightforward fashion, playing up the sentimentality in tandem with its historical weight — hardly a surprise for such blatant Oscar bait. Working within those expectations, Daniels has a delivered a fairly thoughtful period drama.

Indeed, it’s a far more tolerable portrait of race in America than “The Help,”which was part of the 2011 awards season race in much the same way that “The Butler” has already entered the 2013 edition. Although Gaines lives in a white man’s world, Daniels’ movie contains hardly any white characters. Anchored by Whitaker’s low-key performance and a surprisingly palatable turn by Oprah Winfrey as his stay-at-home wife, “The Butler” takes its cues from the lead character and foregrounds unquestionably stirring material.

Though occasionally cheesy in its celebratory approach to the progress of civil rights, Daniels’ story (written by Danny Strong and adapted from Wil Haygood’s Washington Post article) is a sturdy alternative approach to 50 years of presidential history. Because it covers so much ground, the movie never slows down. Within minutes, Daniels provides an overview of the first three decades in Gaines’ life: We first see him as a child witnessing his father’s death at the hands of a mindless overseer, leading to Gaines’ training as a “house nigger” before he sets out on his own and learns to view that term as a pejorative. Then it’s the late fifties and he’s settled into a gig at a posh D.C. hotel, where he catches the eye of a White House staffer. 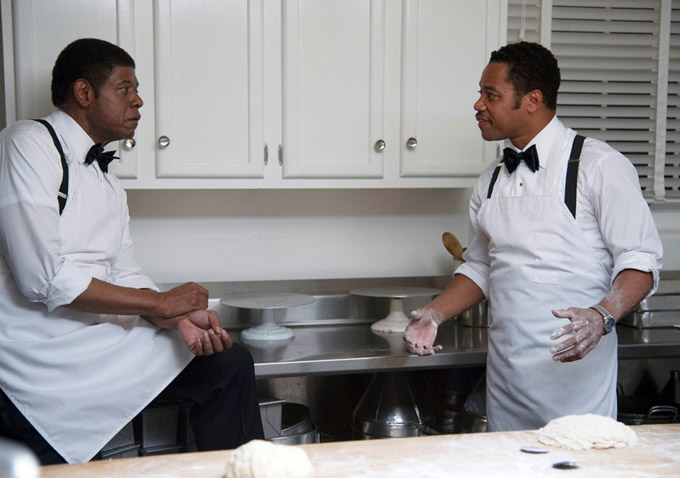 The rest is history — but with a unique point of view. Dividing his time between a settled lower-class existence on the outskirts of town with his wife Gloria (Winfrey) and their two young children, Gaines adapts to a life in the White House.

At this point, “The Butler” falters: Using famous faces to play famous names creates an unintentionally comedic effect. The first glimpses of Robin Williams as Dwight Eisenhower and John Cusack doing a mild Richard Nixon impersonation invite immediate chortles — as does Liev Schreiber, whose broad and cranky caricature of a constipated Lyndon B. Johnson involves a scene in which he sits on the can and orders Gaines to bring him prune juice. Here, Daniels’ campy qualities threaten to overtake the material, but these irreverent asides mercifully recede as Gaines bears witness to historical events from multiple angles at once.

At home, he copes with his older son Louis’s (David Oyelowo) burgeoning radicalism, which begins with the early stirrings of civil rights protest in the south and eventually leads him to join the Black Panther party. Whitaker’s expression of rage toward the son’s attitude forms a telling contrast with Gaines’ subdued demeanor at work, where he watches closely as presidents ranging from Eisenhower to Kennedy show a modicum of compassion for African-American struggles. Only when he overhears Nixon’s condemnation of the Black Panthers does he start to contemplate whether there’s more than pure carelessness to the activism that drives his son forward. These moments showcase a curious tension between Daniels’ heavy-handed approach to historical events and the emotional realism that enhances them.

As demonstrated by their most outlandish extremes, Daniels’ movies aim to please, and the strongest bits of “The Butler” involve the small triumphs that define Gaines’ career, such as his urging a superior for a raise or receiving an official invite to a White House dinner and getting served by his colleagues. His son’s experiences with the surge of intellectualism among black radicals provides a didactic but provocative commentary on Gaines’ importance. In discussion with Martin Luther King, Jr. (Nelsan Ellis), Louis listens to a discussion of “the black domestic,” a more advanced reading of the “house nigger” mentality that initially defined Gaines’ work ethic. “In many ways, they are subversive without even knowing it,” observes the scholar.

It’s this gentle innocence that allows Gaines to remain so inherently likable as well as a figure of provocation. Furious with his son’s activism, Gaines plays the role of witness rather than hero. Daniels explores this mentality in visual terms, particularly with one outstanding montage that shifts between Louis getting arrested after a nasty showdown during an Alabama sit-in and Gaines going through the motions of his daily routine.

While veering on overstatement, the educational perspective is balanced off by glances at Gaines’ home life, particularly his tender relationship with his wife. Even as a minor subplot involving her affair with a shady neighbor (Terrence Howard) goes nowhere, Winfrey never overplays her role, and Daniels only toys with melodramatic possibilities rather than allowing them to take over.

That changes at the very end, when Daniels turns up the histrionics for the 2008 election. Yet the finale remains more or less faithful to the original article that spawned the movie, and “The Butler” can’t be faulted for indulging in the same triumphant spirit experienced by the source of Gaines’ character. The last words of the movie are all too familiar — “Yes, we can” — a grandiose gesture to be sure, but one that feels earned. Just as Gaines served his presidents, “The Butler” serves the legacy of its subject. The name of the movie implies that Lee Daniels lords over the material, but its true author is Eugene Allen.

HOW WILL IT PLAY? The Weinstein Company releases “The Butler” nationwide on August 16. Its strong appeal for black audiences suggest a strong turnout for this underserved niche, and the movie seems well-positioned to gain some decent traction for its performances during awards season.