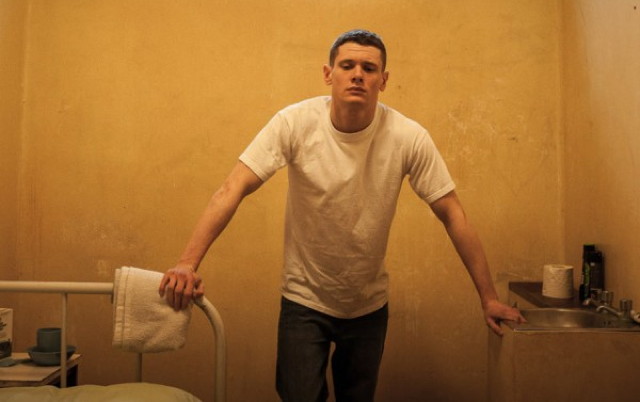 Prison dramas tend to invite the expectations of intense, dangerous scenarios filled with violent confrontations and vulgar spats. British director David Mackenzie’s gradually affecting “Starred Up” has all those ingredients but uses them for more precise means that merely revealing the harsh nature of life behind bars. Mackenzie (whose previous credits include “Perfect Sense” and “Young Adam”) applies a sharp kitchen sink realism to this haunting setting and directs it toward an ultimately moving family drama that just happens to involve vicious convicts.

The material comes from first-time screenwriter Jonathan Asser, who drew from his experiences as a prison psychologist to craft a detailed portrait of the U.K. prison ecosystem that traps each of his characters, including the staff. Though a soft-spoken analyst does emerge in the plot, he’s hardly a panacea for thuggish new inmate Eric (a tightly wound Jack O’Connell). After being incarcerated on relatively minor charges, he quickly winds up in a physical altercation with oppressive longtime inmates and reacts with an unwieldy self-defense that suddenly puts him in the cross-hairs of baton-wielding officers.

Mackenzie stages Eric’s showdown with prison authorities with a terrific eye for the claustrophobia of the enclosure, as the ferocious man manages to fend off officers with such severe behavior that the mayhem almost veers into slapstick territory. Given a tense warning and assigned to the care of weak-kneed shrink (Rupert Friend), Eric continues to act out — but his angst starts to make more sense with the revelation that his own father, Nev (Ben Mendelsohn), is a fellow inmate.

Though the similarly hotheaded Nev at first shows little interest in assuming care for his son, Mackenzie steadily draws a parallel between the two men’s fury to the point where it’s clear that both use rage as a defense mechanism against any pressure to confront their feelings. To American ears, Asser’s script is littered with plenty of prison dialect that’s not always easy to comprehend, but the looks of anger and confusion that these characters exchange transcends the blurriness of their dialogue. Eric’s maniacal state when he arrives in the prison evolves over the course of his experience until he seems far more like victim than aggressor. Though some of the more outwardly corrupt inmates lack the same clearly defined traits, their oppressive behavior toward Eric provides an agent for change in the troubled father-son relationship lurking beneath the movie’s gruff exterior.

Similar to Jacques Audiard’s “A Prophet,” Mackenzie’s story uses its grim setting to craft a powerful chamber piece in which the prison — where the action exclusively takes place — turns into a character as well. Filmed with a shaky cam style and filled with bloody punches and shouting matches, “Starred Up” thrusts viewers into its protagonists’ disturbed mindset, which elevates the eventual moment when the two central men start to make progress to profound emotional heights. When Nev first indicates an interest in looking after his son, the limitations with which he can do anything about it establish a fast-paced climax that pushes “Starred Up” beyond the more familiar, gritty terrain of its earlier scenes.

Pushing beyond the brutal exterior of his material, Mackenzie reveals the tender story of estrangement beneath, but never forces the sentimentality. Just as “Starred Up” veers toward a dark climax with a pileup of incidents involving police corruption and prison hierarchy, an entirely separate plot emerges and raises the stakes of the scenario. No longer merely a tale of trapped men, “Starred Up” evolves into a chronicle of their salvation. The movie only earns the chance to get sappy when its characters do.

HOW WILL IT PLAY? A hit at Telluride ahead of its Toronto International Film Festival screening, the film’s tough content and heavy accents will make it a tough sell to U.S. theaters, though a midsize distributor could gear its genre ingredients toward solid returns on VOD.