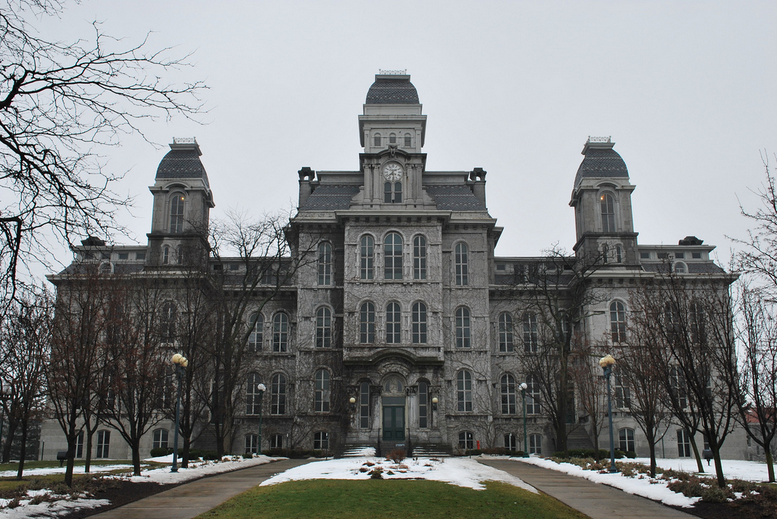 This weekend, festival favorites like Joshua Oppenheimer’s “The Act of Killing” and Donal Mosher and Mike Palmieri’s “Off-Label” will screen at a festival in Central New York.

As indie filmmakers often focus on developing a resume of the most impressive film festivals and focus their theatrical campaigns on their biggest markets, universities provide a unique opportunity to provide filmmakers opportunities they miss if they don’t entertain the possibility of screening for university-sponsored film festivals.

Here are some reasons that university film festivals are worthwhile for filmmakers to consider:

SUHRFF, for instance started off as a South Asian human rights film festival.  Festival founder, Tula Goenka said, “I started the festival in 2003.  It was soon after 9/11, and I realized that we needed to tell stories from the South Asian region.  We needed to go beyond [at that time] just focusing on what’s going on in Afghanistan, and look at social justice stories elsewhere, too.”  The festival joined up with the NYC institution The Asia Society for its first few years, but has since been running the festival solely within the university.

Universities are key cultural programmers in many American cities.

Local culture and history may make a film especially poignant for some of these harder-to-reach areas.

“Central New York is very historic,” Goenka said. “The seed of the Iroquois Nation is there. The women’s movement started here, the Underground railroad went through here.”  SUHRFF, then, is not only quite possibly the only chance some of these films could have of a screening in Syracuse, but also a chance to screen in a city whose history is tied to various American human rights issues.

It’s a chance to remind students that the indie world is a possibility, and that there’s more to a career than boatloads of cash.

“I’m teaching in one of the premiere communication schools in the country [the SI Newhouse School of Public Communications] and the world,” said Goenka. “It’s great that people are getting jobs and creating entertainment, news, and PR.  But if you’re not using your skills to make a difference in the world and standing up for what is right and just, then what are you really doing?”

That being said, it’s a way to make money, and you get to paid to speak with other creators — students.

“As educators, we see festival screenings as rich opportunities to create public conversations about the vital issues addressed by the films that we select for the program,” Hallas said. “Thus, whenever possible we invite filmmakers to come to campus, not only to introduce and discuss their films, but also to share their work in a variety of other contexts, such as brown bag lunches or class visits. Such additional programming creates greater buy-in and funding opportunities on campus, allowing us to provide more generous filmmaker honoraria as well as screening fees at the festival. University screenings can play an important role in the long term distribution of independent documentaries, particularly within the educational market.”

Goenka added, “Universities are basically companies that run speaker series. Once you start, there are thousands of schools, college, and universities across the United States. You can get paid for your work, and have discussions with interested creators — students and faculty members. You can inspire the younger generations, and what could be better than that?”

It’s a way to be a part of intellectual conversations that you might not be privy to.

“When I invited John Greyson to come to SU in 2010 to screen ‘Fig Trees,’ Stephanie Clare, a scholar who happened to be visiting from Oxford, came to the screening,” Hallas said, “which then inspired her to write an article on Greyson’s incredible doc-opera, which recently appeared in the journal GLQ [Gay & Lesbian Quarterly]. Last year, we invited Trisha Ziff to the festival to screen her powerful documentary on the ‘Mexican Suitcase’ and it gave me the opportunity to talk in depth with Ziff about her work in documenting photography on film, which is precisely the topic of my current book project.”  And having people write about work increases its value.  “When an independent film is written about by scholars,” Hallas added, “it is more likely that its educational sales will increase as faculty frequently select films for their courses because there are smart, academic readings to pair with them. “

For more information on the SUHRFF, visit its website.