Beyond 'Orange Is The New Black': The Summer of the Lesbian Web Series 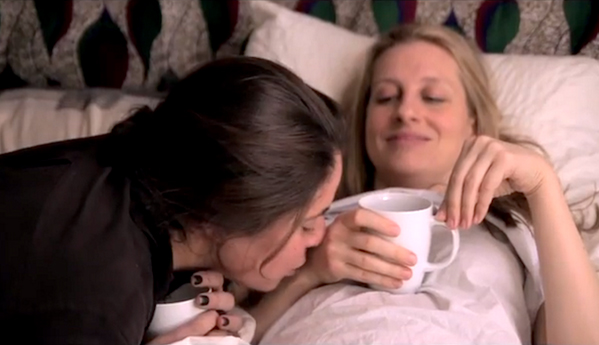 This summer I was on my way to see a friend’s band
when Regina Spektor’s voice pierced my ears. It was coming from a
ground-floor flat: “Yooouu’ve got tiiiiiiiiiime!” “Orange Is New Black,” via title credits, leapt from my laptop to my city street.

I’ve never heard a web series broadcast so publicly.
Netflix’s drama has touched a nerve, no doubt. It’s sparked some
discussion about women in prison, and the racist injustices, if not
the operations, of the prison industrial complex. But more than anything
else its popularity demonstrates widespread desire for television dramas
about people other than white, straight men (they’re not all “Breaking Bad”).

But while “Orange Is The New Black” is significant, it wasn’t the only web series
about queer women this summer. There’s been a steady release
of indies in comedy, drama and even horror featuring love between ladies.

It’s not surprising. Web series succeed when they
do something different from or better than television. Lesbian and queer
women have always had a place in the indie TV market, where their stories
aren’t warped by network development. “Anyone But Me” was an indie breakout at a time when
Hollywood writers were praying audiences would watch scripted shows
independent of TV networks (the show grew out of the 2007-2008 strike
and later won a Writers Guild Award). Low-budget shows like the black
melodrama “The Lovers and Friends Show,” Brooklyn comedy “The Slope” and cartoon “Lizzy the Lezzy” amassed tens of thousands of fans through blogs and word of
mouth.

There are now plenty of good-to-great romantic comedies, buddy
sitcoms, soap operas, and even horror web series. Exciting projects
are in the pipeline: Anyone But Me’s writer/director Tina Cesa Ward will release
a drama, “Producing Juliet,” set
in New York’s theater world this month; One More Lesbian’s tello
released a solid teaser for “The N&N: Files,” a police procedural based on an unaired
pilot at UPN; in July comedians Beth Lisick and Tara Jepsen kickstarted
$30,000 for “Rods
and Cones,” based on their “Carole and Mitzi” act, guest-starring
artists Jibz Cameron and Erin Markey; and there’s always hope Lena
Waithe’s “Twenties,” a comedy about
a young black woman in love with a straight girl, will find a buyer.

Below is a closer look at nine series about queer women worth putting in a playlist now.

The art-house crowns this year belong to “F to 7th,” from “Slope” co-creator Ingrid Jungermann, and “Little Horribles,” created by and starring newcomer
Amy York Rubin. F to 7thconcluded its first season in the spring
with one of the queerest episodes of a web series I’ve seen to date:

The premise of “Little Horribles” is simple: it follows the failures of Amy,
a “self-indulgent lesbian.” The show works because it’s scaled
for the medium. Rubin never set out to write a web series, but she was
inspired by life’s minor humiliations. The fifth episode, “Stunning”
is a good example:

“I’d had one or two experiences like that, and
it was really upsetting,” Rubin said during an interview at Vidcon
this year. “I remember relaying this story to my mom and my sister
and they were, like, laughing hysterically…I realized I could tell
these stories that were really emotional but also entertaining and funny
without cheapening it into a joke.”

That kind of small, intimate humor is au courant these days on television, even though it’s ideally
suited to the rule-free space of YouTube. Rubin drew inspiration from
the women who came before her — including executive producer Issa Rae
and Broad City,
whose co-creator Ilana Glazer guest stars.

“I’m experimenting,” she said. “I really believe there
is an audience for this stuff. I wanted to watch stuff like this. I
wanted to watch what Issa was making or Broad City. I think those people are there,” she said.

It’s hard to write a good “coming out” narrative.
It’s not a cinematic process. Squaresville, as always, keeps it simple.

Esther (Kylie Sparks) confessed she was questioning
her sexuality last season, but she kept it from Zelda (Mary Kate Wiles).
Esther and Zelda are Ghostworld and Romi and Michelle-inspired geek girls who need each other
to grow and survive in the suburbs. They fought at the end of the first
season, but repaired their bond in the second. Esther stayed mum for
the rest of the season. She dreamed, watched her friend Percy (Austin
Rogers) go through coming-of-age romance and tried on a new identity.

Last week’s season finale – preceded by another
great episode, “Hearts and Farts” – broke Esther’s silence
and gave Squaresville’s
straight fans a nice script on how to take news of your friend’s sexuality.

A comedy network for women on YouTube, Comediva,
has premiered a few web series, and LESBROS, is among their better offerings. Channeling Jake and Amir, LESBROS depicts a tight-knit lesbian-straight guy friendship.
The two are more compatible than odd couple, but it works in short bursts.

Finally, East WillyB wrapped its expanded first season, which mostly
focused on Willy and his struggle to fight gentrification and win back
his ex. His bartender at buddy, Ceci (Julia Grob) revealed her lesbian
identity this season and spent most of it looking for her birth father.
Willy was so focused on his own problems he most neglected Ceci, putting
the friendship on the rocks and leaving the audience cliffhanging: can
these buds repair their relationship or will Willy’s desire to realize
the American dream pull them apart?

Keeping it light are a few partner comedies in the
great American sitcom tradition. Like Jane Espenson’s “Husbands,” now on CW’s new web network, these shows
succeed on comic chemistry of the stars. It helps them save cash on
locations: they can lock two actors in a room while also poking fun
at the “homebody” stereotype.

In tello’s “Roomies and Neighbors,” buddies Sam and Alex (Brandy Howard) are buddies
pretend to be partners to live in super-special lesbian-only apartment
complex in Chicago. They may be friends but they bicker like Lucy and
Desi. Julie Goldman takes the spotlight as Sam, the sarcastic, gay half
of the couple. She has fun and hams it up, which is all you need in
a web series, sometimes.

“The Better Half” features the ordinary adventures of a couple
who’ve been together awhile and are trying to spice it up. By the
third episode the couple has committed to some new experiences. The
show is crisp and light, nicely shot.

“Lyle,” created and directed by Stewart Thornike, is a horror
series about a couple (Gaby Hoffman and Ingrid Jungermann) who have
a newborn and want to purchase a Brooklyn brownstone. In the first three
episodes, the baby’s behavior goes from puzzling to frightening quickly
enough to leave me wanting more.

The team behind “The 3 Bits,” Max Freeman and Margaret Singer, are also releasing
one-third of their series, a planned 27. “The 3 Bits” is one show with three separate but loosely linked
storylines told in three separate genres: 1) Roman (Singer), a lesbian
drug dealer, has romantic and money problems her stylish thriller, 2)
Henry (Cole Escola), Roman’s brother, is a coquettish gay man trying
to have a good time, and 3) Madison (Erin Markey), a Park Slope mom,
whose episodes are premiering soon.

“I think we want the vibe to be fun and free and inclusive. So Roman’s
story opens with a trans guy in bed with a lesbian, who tries
to stab him to death. We’d like it to be open to all sorts of stories
and people,” Freeman told me in an interview.

When I asked if they were challenging the normative
impulse among today’s gay establishment, they agreed. Freeman said
we’re losing the radicalism that made gay culture possible in the
first place. But Singer said they try not to worry too much about representing
the community at large.

“It’s hard to shirk that weight,” she said. “It’s the burden
of being a minority artist. Gay men are bad. Lesbians are way worse.
They’re policing those stories so hard.”

After releasing the first set of episodes the team are planning to
crowdfinance the full season to realize the complete vision. What’s
online is great, particularly for first-time series producers.
Roman’s thriller is as moody and sleek as thrillers should be, while
Henry’s gay rom-com is fun and just naughty enough. “The 3 Bits” is a refreshing departure from the relatively safe
stories populating most of television and mainstream online video.