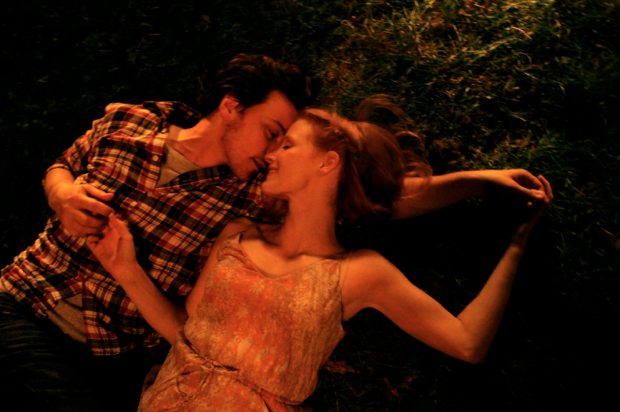 As Indiewire’s Eric Kohn declared in his review, you’d be hard pressed to find a project more “innovative” at the still underway 2013 Toronto International Film Festival than Ned Benson’s astonishingly ambitious two-part opus “The Disappearance of Eleanor Rigby.” Clocking in at a whopping 190 minutes (each film runs approximately half that length), “Rigby” examines the dissolution of a marriage
from the perspectives of both halves of the couple (played by Jessica Chastain and James McAvoy). The husband’s section is titled “Him”; the wife’s “Her.” Audiences in Toronto have been treated to the project in both orders, depending on the day.

Labeled as a “work in progress” cut for its premiere here in Toronto, “Rigby” came to the festival as a question mark only to emerge as one of the true hits of the event with a splashy buy courtesy of The Weinstein Company and stellar word of mouth. Indiewire sat down with Chastain and first-time feature filmmaker Benson to discuss the film’s 10-year journey to the screen, and the Toronto reaction to the film.

This film’s been 10 years in the making for the two of you. I caught a press screening of it the morning following its world premiere where I heard you got very emotional, Jess.

Chastain: I was very emotional trying not to cry. It’s so embarrassing. We’ve all known each other for 10 years. The past two years, being here is shocking. “Take Shelter” and “Coriolanus” were here two years ago. So my movies have not been out for very long. My life, the way it is now, it was a very quick thing. Sometimes people people think I’m used to it. It’s still very new to me.

It’s been a wonderful two years. It feels like my dreams have been coming true. But we all spent so much time going to see Hitchcock movies at the Aero theater, and Isabelle Huppert [who plays Chastain’s mother in the film] movies at the Ludlow, and dreaming of someday being in the movies and making films.

Yesterday, to be in an audience of 2,500 people, and to see the reception that it got, and basically see somebody that I love go through the experience that I’ve had for two years, is in a strange way more meaningful than when it happens to you. When you watch it and celebrate it for someone else… I was a wreck.

Benson: I don’t think it hit me till after when were at dinner. I just kind of lost it in front of Jess. It was a pretty special moment. You try to do this for so long. Since the moment I started writing the first one it’s been 10 years in the making. It’s pretty magic to be able to wake up every day and do this for a living.

Chastain: And no one likes to take a chance in the industry. It’s tough to take one on a newbie. I know it as an actor. It took forever to break through.

Chastain: Oh my god, it’s like, you want to get a film made? Good luck.

This is a remarkably ambitious directorial debut. What you made you take that leap with Ned, Jess?

Chastain: Well, I chased him down 10 years ago. I won tickets to the Malibu Film Festival when I first moved to Los Angeles. I went to see the shorts and there was an incredible short that he acted in and directed. I went up to him and said, “Sorry, I don’t mean to bother you, but I’m an actress and that was such a moving, beautiful short. Can I have please have my manager send you my reel because I’d really love to work with you someday.” I’d like done a guest spot on “ER.” That’s all I had on my reel! [Laughs]  And from that moment we became friends. He came to see me in plays off Broadway.

Benson: It’s crazy when I think about it, because that one moment defined it. It’s why it got made. She was still running around on auditions when I was writing the script. It’s insane that all of a sudden because her career took off this project got to take off too. It’s pretty amazing thing how one moment in your entire career, when you’re fighting to make it happen… we were just two kids trying to make movies.

Chastain: I was at a point in my career where I could help get the movie made. But also this was a very tough movie to get made. There were times when we didn’t think it would happen. There was a weekend when I had one offer that was a huge movie, lots of money, and then this. When I found out that it could happen, then I decided to do this.

I’m glad you chose this.

Chastain: Oh my god, me too!

I was shocked to learn after seeing it that you didn’t have both films in mind when first conceiving of the project, Ned. You initially just wrote “Him” as a standalone.

Benson: I’m all for inference. With that first script there’s a lot left to the imagination. And that’s where Jess…

Chastain: He has a bossy actress. [Laughs]

Benson: When Jess read the script she was like, “Where does this person go? Who is she?”

Chastain: But also, in cinema today — I’m such a feminist, I can’t help it [laughs] — we always get the male perspective. I want the female perspective too. He asked me if I wanted to play the part and I said, “Yes of course, I’d love to play the part.” But basically she’s serving his story. Where does she go? And maybe I was such a brat —

Benson: No, it spurred a whole conversation in my head. I knew the subtext, but I was like, alright, I’m going to write this out. And then I started writing it. As we were developing it I was giving her scenes and all of sudden there were two scripts.

It’s rare to hear of an actor coming on to the picture and changing the filmmaker’s vision.

Chastain: I didn’t change his vision.

Chastain: In a group like we are, we all inspire each other.

Benson: That one question forced me to open it up and start thinking about it.

Chastain: He changed the first script. That script was on the black list. It was a great script. But when he actually started to write “Her” he realized “I’m going to connect these two.” So he went into a script that was already celebrated.

Benson: Once I’d finished the two I had to back to intertwine them in a way to make a cohesive whole.

Can either of you talk about the challenge of portraying the two sides of the relationship? The two scenes in which the couple interact differ not only in blocking from film to film, but in dialogue too.

Chastain: James and played two characters. I played Eleanor Rigby, but then I also played a character that was his perception of her. You don’t really go very deep into who she is because it’s his film. You can’t penetrate her. She’s distant, cold and mysterious and doesn’t know where she’s coming from. But then I got to play her from her point of view. That was very strange. I’d never done anything like that before.

Benson: It’s a feat of acting for both of them. If you think about it, Jess had to play his idea of that character. When somebody gets broken up with, their perception of that person is very cold.