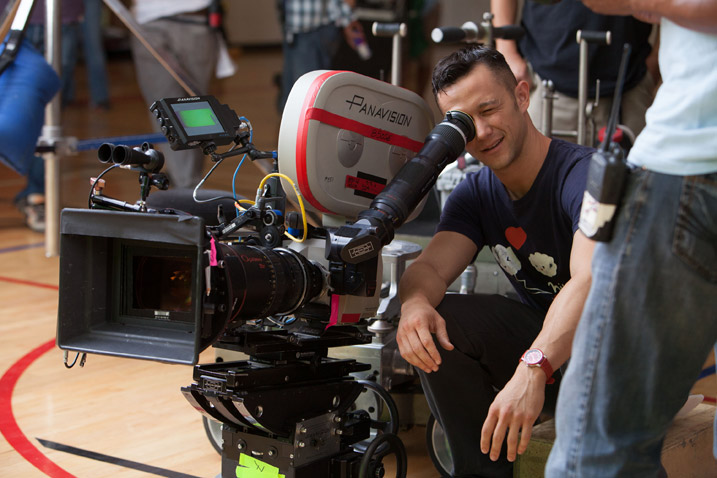 While we’re still a few days away from Joseph Gordon-Levitt’s feature-length directorial debut “Don Jon,” you can watch his first efforts behind the camera right now.

READ MORE: Joseph Gordon-Levitt on RECollection: Volume 1: “This is the first time that I’ve made something.”

The child actor turned adult filmmaker has been plugging his collaborative production company hitRECord for years, wearing the company’s red logo to various premieres and recently launching a hitRECord television show. Though he’s certainly the face of the organization, most of his efforts are focused on spotlighting his lesser known—or completely unknown—collaborators. Yet the two-time Golden Globe nominee has done plenty of work for the company as a director, actor, editor, and more.

Below, Indiewire has selected the five most illuminating RECords produced by hitRECord’s founder, with a special look at how they formed his vision for “Don Jon.” (“Don Jon” opens wide this Friday.)

One of the more accessible short films found on the often-experimental site is also, unsurprisingly, its most recommended. Gordon-Levitt stars as mustached Morgan M. Morgansen, a smitten gentleman embarking on a date with Destiny. Mirroring the initially-hidden-if-almost-immediately-obvious double meanings of the short’s addictive diction, Destiny is both a woman and a life-changing moment in Morgan’s mesmerizing universe. The duo’s date could be summed up matter-of-factly, but the embellishment given to Morgan & Destiny’s dinner makes it memorable for more than just the meal.

The short played at the 2010 Sundance Film Festival where Gordon-Levitt used it as a kind of introduction to what hitRECord was all about. Approximately 180 collaborators contributed to the five-minute short, with Gordon-Levitt serving as narrator, lead actor, and director. The love story and pun-y title certainly allude to one of his more popular films from 2009, Marc Webb’s breakout hit “(500) Days of Summer,” but many aspects of “Morgan M. Morgansen” are applicable to “Don Jon,” as well.

As much as the film’s marketing plan wants you to think “Don Jon” is about sex, sex, and sex, Gordon-Levitt crafted a film very much about how popular media alters our ideas of what we want from relationships. The film isn’t so much about an obsession with pornography as it is about a man searching for connections, a fact made even more apparent when the title was changed from “Don Jon’s Addiction” to “Don Jon.” Romance is not dead in “Don Jon.” Gordon-Levitt is just seeing it from the eye of a character who starts off as the complete opposite of Morgan M. Morgansen. As Morgan, he’s an overly sensitive innocent looking for love, but as Jon he’s a brash Lothario without a clue what he’s looking for. Without spoiling anything, each character ends up in the same place. The lens may have changed, but Gordon-Levitt’s perspective remains the same.

*Joseph Gordon-Levitt made a sequel to “Morgansen” that played at SXSW in 2010. Titled “Morgan and Destiny’s Eleventeenth Date – The Zeppelin Zoo,” the short co-stars fellow RECorder Channing Tatum as Destiny’s former lover who competes with Morgan for her affection. Based solely on the preceding sentence, you have no reason not to watch.

While Gordon-Levitt may have used “Morgan M. Morgansen’s Date With Destiny” to introduce people to hitRECord, I believe “Love: A Tragedy” is an even better example of the company’s collaborative powers. This live performance from the company’s 2011 Fall Formal was recorded on dozens if not hundreds of phones, video cameras, and professional equipment by a bevy of average Joes (oh, puns) and then edited together with archival film footage to create the short film now available online. What started as a five minute script from username rcjohnso became a two-man live show and then a short film created from a theater filled with participating audience members. It’s simple, short, and incredibly sweet.
While “Love: A Tragedy” wasn’t written by Gordon-Levitt, it perfectly parallels the battling expectations of love put forth in the director’s feature debut. When “Don Jon” starts out, Jon sees love as sick joke instilled in our minds from bad rom-coms. He’s your prototypical bachelor whose heart is as closed off as his fly is wide open. Jon’s journey to the other side is a unique one, but the rote traditions established in each genre arc from “Love: A Tragedy” remain.
“The Man With a Turnip For a Head”
Gary Oldman’s live narration kind of steals the spotlight from this perfectly delightful animated short. I’m sure everyone involved in its creation was honored by the Oscar nominee’s involvement, but let’s not get too distracted from the simple yet vital message behind “The Man With a Turnip For a Head:” be yourself, and be proud to be unique. What many may have learned as children during “Sesame Street” or “Mr. Rodgers” is reinforced for adult fans and filmmakers in a succinct two minute video.
The same could be said for “Don Jon.” The film isn’t a condemnation of a lifestyle. It never throws Jon under the bus for behaving the way he does. Gordon-Levitt actually defends his character’s addiction, instead choosing to condemn a society that pushes impractical ideals onto Jon. He shouldn’t be embarrassed by what makes him happy (thought he may want to ask why it’s what makes him the happiest). Gordon-Levitt takes an aspect of life many people deem their most intimate and exposes the lies within the entertainment industry’s depiction of it. By putting these issues front and center, he stands by Jon’s right to be himself and not be judged for it.
“The Man With a Turnip For a Head” also mimics “Don Jon” in its pacing. Gordon-Levitt, the director, seems focused on delivering films with a visual and lyrical poetry. Here, it’s apparent at every level from the rhyming lines to the four-beat melody repeating throughout. Yet many of the movements within the frame also accompany the beats in narration, a trait apparent even in the trailer for “Don Jon.” “My body. My pad. My ride. My family. My church. My boys. My girls. My porn.” This cycle of Jon’s priorities repeats and speeds up as new images flash across the screen until the appearance of Scarlett Johansson changes the pattern.
It’s an intriguing facet of the young director’s dynamic, and one that becomes more apparent with every video he’s behind. Granted, there are way more cooks in the hitRECord kitchen than on “Don Jon,” but that doesn’t mean he didn’t learn and apply equally from both experiences.
“Escargots”
Gordon-Levitt’s rhythms become even more apparent in the first hitRECord video ever published. Don’t ask me to interpret the French poem performed by the young actor. Jacque Prevert’s “Chanson des escargots qui vont a l’enterrement” is as foreign to me now as it was before I became enamored with the 2006 video interpretation from Gordon-Levitt and Rian Johnson, director and collaborator on “Brick” and “Looper.”
Yet even without Google translator, viewers can see how Gordon-Levitt incorporates found footage into the three-minute video and, more importantly, the passion with which he attacks the material. At the very least, it supports the idea Gordon-Levitt is a filmmaker innately interested in all aspects of the medium and how each can relate to the other. Visual poetry is the name of his game, and it’s all too on the nose with this early work.
“Pictures of Assholes”
More of an exasperated release than a short film, Gordon-Levitt’s second published piece under the hitRECord label literally turns the camera around on two paparazzi who were irritating the young actor. Perhaps I shouldn’t say “irritating.” They were certainly a bother, but Gordon-Levitt’s playful tone in the video implies curiosity over annoyance. More than the shooting style—which is more practical than artistic—this video speaks to Gordon-Levitt’s desire to question everything. It’s as if Gordon-Levitt the “celebrity” is saying, “Two guys are hounding me with cameras, and I’m just supposed to take it? I think not. Let’s ask some questions.”
Similarly, you can imagine him saying something similar when thinking up “Don Jon.” “I can’t play a musclehead from Jersey who just wants to jerk off?” Or, more accurately, “You want me to star in another romantic comedy? Fine, but we’re doing it my way, and I’m calling out the whole genre on its impossible standards.” Gordon-Levitt has made a career out of bucking the system. The former child television star took on more independent movies than blockbusters as he got older, and now has seemingly attached himself to box office goliath Christopher Nolan, who’s arguably the most original filmmaker working within the studio system.
With original, anarchic films like “Brick,” “Stop-Loss,” “Hesher,” and “Looper” on his acting resume, one can only wonder what his directorial slate will look like in 20 years. With “Don Jon,” he’s certainly off to a good start.
Other notable videos:
“And a New Earth”
“Mum and Me”
“Strawberry Bootlaces”