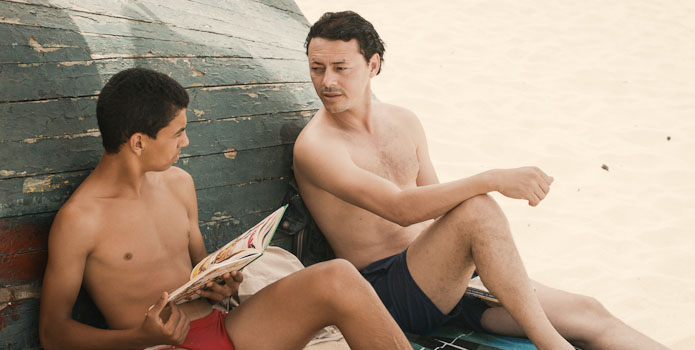 A lot of discussion came out of this year’s Toronto International Film Festival — which ended a week ago yesterday — that with nearly 300 feature films (many of them major Oscar contenders), it was getting more and more difficult for smaller films to get much attention during the festival (though there’s definitely an argument to be made that they can utilize the prestige of playing at TIFF to get said attention elsewhere later). Either way, one of the many examples of films that not too many folks were talking about was Abdellah Taïa’s “Salvation Army” — and here’s hoping it makes up for that somewhere down the line.

A semi-autobiographical tale of a young Moroccan man navigating his sexuality (among many other things), “Salvation Army” is the directorial debut of Taïa, and is based on his own eponymous novel. Structured in a diptych, the first half of the film follows a teenaged Abdellah (Said Mrini) as he struggles with the social codes of Morocco. The second half, meanwhile, finds a young adult Abdellah (Karim Ait M’hand) on a scholarship in Switzerland, negotiating a whole new set of codes as a queer Moroccan man in Geneva. The two halves come together to create a subtly powerful (and gorgeously shot) film about both what it’s like to be a queer person in the Arab world, and to be a queer Arab person in the Western world.

Taïa talked to Indiewire shortly after the Toronto Film Festival about the film, the difficulties with getting it made, and where it goes from here…

Talk a bit about your literary work that led up to this film.

My dream was always to become one day a filmmaker and that’s why I decided, at 13, to go to Paris.  It took me many many years to be able to make my first film, which was adapted from my own novel. I published nine books, written in French language and most of them had autobigraphical inspiration. Literature came into my life without me deciding to be a writer. It imposed itself on me. I understood in the process that to write a book would be a good way to write already about my images, my obsessions, my way of seeing the world. All my books are full of cinematic references: Satyajit Ray, Michael Powell, Salah Abou Seif,  Marilyn Monroe, Douglas Sirk…

What led to the decision to turn your book into a film, and to direct it yourself?

A French producer, Claude Kunetz, read “Salvation Army,” loved it, and contacted me. He knew about my desire to make films. He said that I should make a movie from this book. I said I had no desire to work on something already published and “finished.” And then I realized that I could totally forget about the book and invent something else with a cinematographic vocabulary. Although this film is coming from an autobiographic work, I had to objectify the story, to make it not only mine. I had to find the right distance, the right images to say the hard reality of my country Morocco, and not only for gay people. To show the silence imposed on everyone there. To show a world that I know very well. No one could write the adaptation in my place. I did it alone.

Was it difficult getting it made?

We had many difficulties to find the financing. The hero — in most of the film, at least — is fifteen years old and gay. A lot of people were afraid of that. So, we did “Salvation Army” with little money and thanks to my four producers, who found the right people to work with me. It was also hard to shoot this film in Morocco because of the subject of homosexuality. Pressure from everywhere. We were afraid of being attacked or stopped. But, in general, to make movies is not something easy at all. The whole process is very hard. I was not only a director, I was a fighter, warrior.

What do you hope people take from the film?

I hope the people will first see it as a film and as a vision. I hope that they will get the rhythm, the hidden secrets. The images seem slow and silent, but they are not. The hero is a gay Moroccan but he is not a cliché victim. Like so many Moroccans, he deals with reality with some perversity. He is totally alone. “Salvation Army” is actually a story of a solitude. Fragments from this solitude. The narration is not a classical one. The film is very different from the book. The perspective is not the same at all. I did not want to be faithful to the book. I didn’t care at all about that… I hope also that the film will be released in my country Morocco. It’s very important for me. Arab Spring started seriously the change of the mentalities in the Arab countries. I think Arabs are ready to see the reality my film is showing.

Where is film already officially set to screen next?

After Venice and Toronto, the film be shown soon in many other film festivals: Reykjavik, Namur, Sao Paulo, Geneva. It will be released theatrically in France in 2014.

My last novel, “Infidels,” is coming out in America in 2014, translated into English by Seven Storie Press. And, of course, I want to continue making movies. As François Truffaut said, “life is cinema, cinema is life.” That is so true. So true.

This Article is related to: Features and tagged Que(e)ries, Toronto International Film Festival