Review: Prep For 'Gravity' With Wild IMAX Concert Fantasy 'Metallica Through the Never' 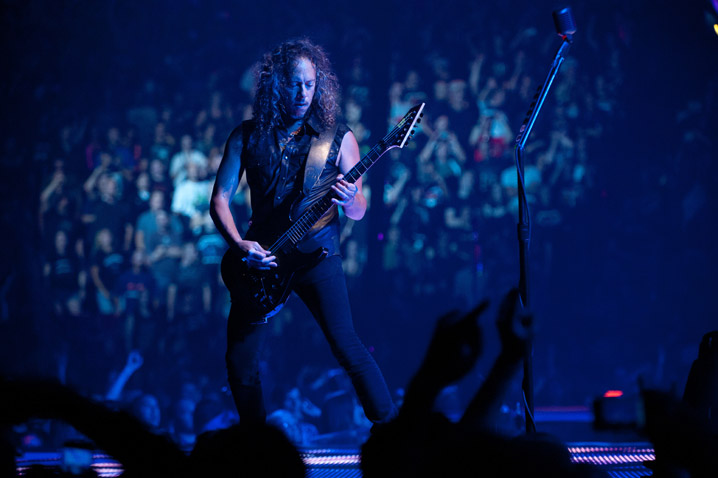 Metallica may not command the same cultural weight it did 25 years ago, but you wouldn’t it know from the spectacle of “Metallica Through the Never,” a fantastically intense experimental concert film readymade for the IMAX 3-D format. Directed by genre maestro Nimród Antal (“Armored,” “Predators”) and several years in the making, “Metallica Through the Never” dresses the conventions of a concert film in stunning effects and a wordless, abstract apocalyptic narrative to frame the music. Mainly, however, it’s a sensory assault that foregrounds the full-throttle intensity of the band’s sound.

Unlike other concert films to take advantage of the large scale format — Martin Scorsese’s Rolling Stones doc “Shine a Light” springs to mind — “Metallica Through the Never” doesn’t merely capture the group in action. Instead, it’s been conceived exclusively to emphasize the band’s hefty sound. While the bulk of the 90-minute running time finds them engaged in a lively, pyrotechnics-filled concert in a stadium designed exclusively for the production, Antal threads into their performance just enough of a story to launch the music beyond the stage.

As a groupie sent during the show speeding through town in pursuit of a mysterious briefcase, Dane Dehaan occasionally surfaces for expressionistic sequences in which he faces down a series of apocalyptic forces, including demented looters and one particularly aggressive whip-wielding horseman. The briefcase isn’t the only MacGuffin associated with this frantic setup; the entire scenario, which unfolds without a single dialogue exchange, merely acts as a vessel for visualizing the band’s greatest hits set list. And if you accept “Metallica Through the Never” on those terms, that’s more than enough.

It’s hard for this casual Metallica admirer to say for certain, but there’s a strong chance they’ve never looked or sounded better. On a completely different level from documentarian Joe Berlinger and Bruce Sinofsky’s traditional behind the scenes portrait “Metallica: Some of Monster,” Antal’s production — conceived and co-written by Metallica — brings a sense of epic grandeur to the band, from the two dozen swirling cameras that capture their arena performance to the blaring sound mix that, for all intents and purposes, actually positions theatrical audiences at the center of the screaming crowd.

As “Metallica Through the Never” careens through some of the group’s best-known tracks, notably “Master of Puppets” and “Enter Sandman,” the experience has a tendency to induce exhaustion. Yet there’s a purity to its intentions that countless explosive blockbuster spectacles never allow for. The movie makes the case for Metallica’s artistry through its assaultive elements, which frees it from the bonds of a traditional plot. The longer that Dehaan continues to make his way down a shadowy street, eventually winding up in a rooftop battle that culminates with skyscrapers shattering all around him, the less realistic he seems. Instead, by his later scenes, Dehaan personifies the music’s brutal power, as well as its potential to erupt from sheer physical energy.

To that end, he’s a consolidation of the entire group’s talent, as they never stop moving over the course of their performance save for the rare occasion when they pause to take in the mania around them. While drummer Lars Ulrich pounds away, singer James Hetfield relentlessly growls into the mic, but also finds plenty of beats to let his humanity bubble up to the surface. “This is what it’s like in our garage,” he says after one fiery set piece, seemingly implying that no matter how big the production, Metallica remains thoroughly untamed. 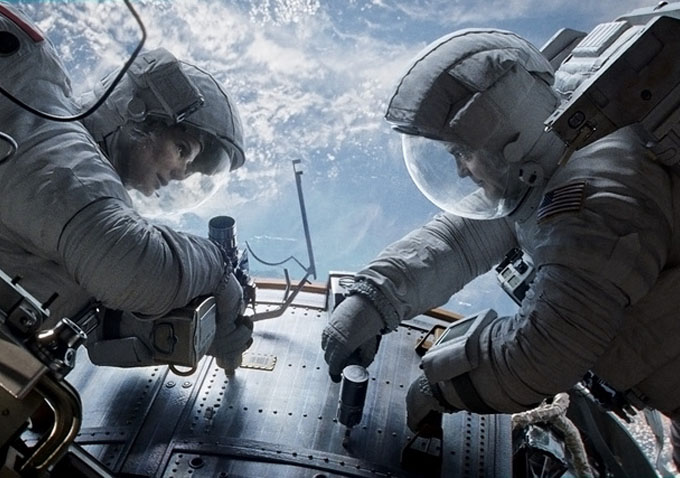 So as a purely visceral cinematic roller coaster, “Metallica Through the Never” is something of a metal head wet dream. But it’s also a rare case in which technological accomplishments don’t just supersede every other element in the picture; they define them. In that regard, it’s an ideal placeholder for the possibilities of the IMAX experience until Alfonso Cuarón’s astronaut survival story “Gravity” hits theaters in October.

While Curarón’s gripping achievement contains a more cogent plot, the simplicity of its scenario — a pair of space cadets (Sandra Bullock and George Clooney) become untethered from their space shuttle and pummel freely through the dark void — shrinks in the shadow of Curarón’s ability to foreground the terrifying experience of being tossed around in space: His virtual camera never stops moving, twisting around his characters as they struggle to find a balance that doesn’t exist. “Through the Never” similarly inhabits a state of constant free-fall, though its strengths are chiefly sonic ones. With “Gravity” around the corner, “Metallica Through the Never” isn’t the year’s most groundbreaking achievement, but it’s surely the most earth-shattering, and that’s enough to make it one helluva comeback story.

HOW WILL IT PLAY? The first release of the newly resurrected Picturehouse, “Metallica Through the Never” opens Friday on several IMAX screens. With the band’s devout fan base already geared up for the experience, it seems well-positioned to draw strong opening weekend numbers and continue to perform well so long as it remains on IMAX screens.