Telluride Film Festival Review: If Miyazaki's New Movie 'The Wind Rises' Is Really His Final Film, It's An Appropriate One 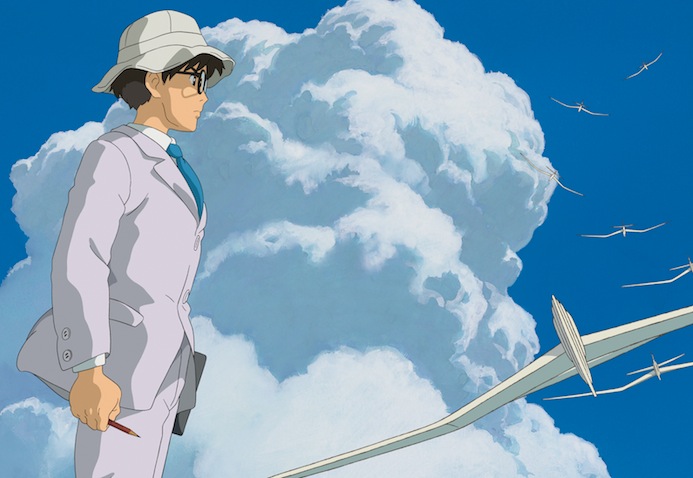 Japanese animator Hayao Miyazaki has achieved status as one of the great filmmakers of his time, with a distinctive visual sensibility that has garnered comparisons to Walt Disney and a depth of imagination that defies any classification other than Miyazaki’s own head. From “Princess Mononoke” to the Oscar-winning “Spirited Away,” Miyazaki’s filmmaking has no immediate parallel outside of the thematically complex and visually audacious 2-D works produced by Studio Ghibli, which he co-founded. It’s hard to believe the brilliant 72-year-old visionary could run out of ideas, but just as easy to see how Miyazaki may have entered a more reflective stage of his career less tied to the otherworldly stories that populate his movies than the struggles of his own life. That’s certainly implied by two recent developments in Miyazaki’s career: the news this week that he’s planning to retire and the North American premiere of his 11th feature, “The Wind Rises,” which helps to explain Miyazaki’s decision.

Though Miyazaki’s movies have always dealt with big ideas — from anti-war arguments to the nuances of gender relations and the innocence of childhood among them — they have always contained a steady dose of fantasy. By contrast, “The Wind Rises” is a fairly straightforward biopic, revolving around the early career ambitions of Jiro Horikoshi, the late Japanese airplane engineer responsible for designing the Mitsubishi A6M Zero, the lightweight aircraft notoriously used in the attack on Pearl Harbor. That morally complex outcome never really comes into play in Miyazaki’s gentle portrait; instead, “The Wind Rises” obsesses over Horikoshi’s fascination with the ethereal quality of airplanes and his desire to play a role in expanding their possibilities, providing a cogent metaphor for Miyazaki’s own filmmaking passion.

In more general terms, Miyazaki’s movies have long obsessed over the possibilities of flight, both real and imagined, and “The Wind Rises” combines both by allowing us to peek inside Horikoshi’s dreams. First seen as a child receiving his first copy of Aviation magazine, the young man imagines himself in conversation with Italian aviation giant Giovanni Caproni (who actually inspired a character in Miyazaki’s “Porco Rosso”). In his unconscious state, Horikoshi envisions impossibly massive flying machines soaring above the heavens. Awake, he chases the vision in his burgeoning career, as the movie flashes forward to 1923 and the man makes his way to engineering school.

En route, Japan suffers from the infamous Kanto earthquake, an event Miyazaki animates with a powerful abruptness of exposive movement as the landscape rises up. The vision of destruction forms a striking contrast to the brighter visuals that define Horikoshi’s dreams, leading to the first and only real indication of Horikoshi facing down a world much bleaker than he envisioned. On the whole, however, “The Wind Rises” maintains a realist streak driven more by dialogue and thoughtful pauses than outlandish imagery.

Once in school, Horikoshi nimbly makes his way into the heart of the profession, developing increasingly more complex aircraft and never losing his drive. Along the way, he develops a relationship with the tender Nahoko, a woman he rescues from the train crash who reenters his life years later. Nahoko’s struggles with tuberculosis — a nod to Thomas Mann’s “The Magic Mountain,” one of the movie’s key reference points — provide an element of melancholy that deepens the atmosphere as the inventor gets closer to designing bonafide war machines. While a fleeting conversation during a business trip in Germany hints at the ethical quandaries associated with Horikoshi’s work, the grim subtext of “The Wind Rises” goes largely unacknowledged, leading to a gaping hole in this otherwise beautifully realized narrative that celebrates the power of curiosity as a motivating force.

For that reason, “The Wind Rises” can be largely forgiven for its apolitical outlook, as Miyazaki trades an interest in the ramifications of Horikoshi’s work for his continuing investment in it. Horikoshi’s commitment to crafting an apparatus on par with the ethereal machines he imagines can be easily seen as a vessel for Miyazaki to explore his own creative process. Having proven his talent time and again, the master has explained himself.

HOW WILL IT PLAY? Already open in Japan, “The Wind Rises” will receive an awards-qualifying run this fall after it screens at the Toronto and New York festivals. Decent reviews and existing interest in Miyazaki’s work may bring the film a fair amount of attention, but the crowded fall season and the challenges of marketing an adult-oriented animated movie may hurt its potential for gaining as much visibility as Miyazaki’s biggest hits.