Telluride Film Festival Review: Ralph Fiennes Directs Himself As Charles Dickens In 'The Invisible Woman,' But It's Felicity Jones Who Shines 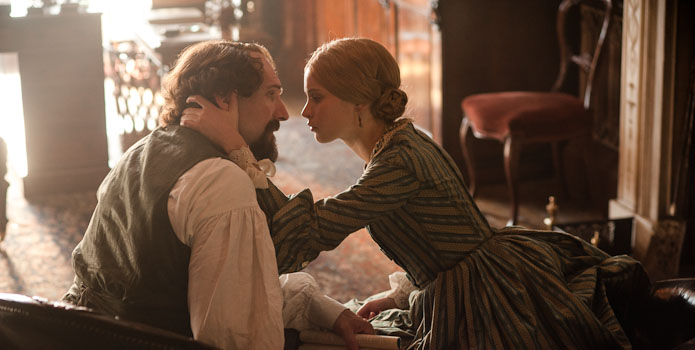 Ralph Fiennes’ quasi-modern adaptation of “Coriolanus,” which marked the actor’s directorial debut, was a sharply experimental take on the source material. For his second effort behind the camera, “The Invisible Woman,” the director has taken a more classical approach. Adapting Claire Tomalin’s book about Ellen Ternan, the actress most famous for her affair with Charles Dickens while nearly 30 years his junior, Fiennes takes on the Dickens role and coaxes a fantastic performance out of Felicity Jones as Ternan. Though suffering from dry patches and a fairly mannered approach, “The Invisible Woman” eventually makes its way to a powerful final third documenting an ultimately tragic romance in deeply felt terms. It’s no Shakespeare, but Fiennes makes the story resonate all the same.

Even when it drags, however, “The Invisible Woman” retains an impressive feel for its period. Cinematographer Rob Hardy (“Shadowdancer”) captures the elegance of the period with warm colors that make virtually every shot worthy of postcard treatment. The gorgeous visuals help to some degree in sustaining the first hour, when the movie takes its time to get going. Opening in a remote area of England in 1833, “The Invisible Woman” finds Ternan rehearsing a Dickens play with young children and gazing on the performance with a wistful stare. From there, Fiennes flashing back to “some time ago,” when the 18-year-old “Nelly” working her way into Dickens’ theater troupe and instantly catching his eye. “She has something,” Dickens asserts, though whether he’s actually drawn to her performative abilities or merely her good looks remains ambiguous as their courtship begins.

Fiennes has said that he wasn’t all that familiar with Dickens’ work when he began developing the project, a backstory that makes sense in the rather basic character of the writer drawn in Abi Morgan’s screenplay. Fiennes capably embodies Dickens as a man smothered by fame and obsession over his genius, but Jones far surpasses that performance with a much more nuanced portrait of Ternan’s youthful obsession with Dickens. The marital discord that eventually leads Dickens to divorce his portly, beleaguered wife is only explored in side-glances, lending the feeling of being inserted into the drama in medias res. While Dickens’ personal dealings lack sufficient fleshing out, his theater presence receives nearly too much screen time, consuming the first half of the movie with underwhelming details and perfunctory characters, including a one-note aid played by Kristin Scott Thomas.

But eventually these scenes matter a lot less than the tale of heartbreak that eventually emerges. Throwing his career into jeopardy, Dickens professes his love for Ternan and she hesitantly plays along. “What is it that we are?” she asks him in a fleeting moment of exasperating before melting into his embrace. He doesn’t know the answer, but they give it a shot anyway, at which point “The Invisible Woman” snaps together as their relationship gets serious.

Staving off gossip, the new couple attempts to make their clandestine life together work, a feat exacerbated when Ternan gets pregnant. Their liaison culminates with an expertly staged recreation of the train crash the two experienced while traveling Europe, and the sequence effectively brings the struggles that the couple have left unstated into a harsh physical reality.

As a filmmaker, Fiennes maintains a subdued tone that’s alternately too restrained to make the drama fluidly engaging and impressively studied in its depiction of the couple’s ups and downs. The strength of the later scenes make it difficult to rescue the project as a whole, but Jones singlehandedly elevates the movie beyond its melodramatic roots. By the end of “The Invisible Woman,” she’s anything but.

HOW WILL IT PLAY? Sony Pictures Classics plans to release “The Invisible Woman” this fall as an awards contender. It should perform decently if not outstandingly well during the crowded year-end season, but expect a formidable supporting actress campaign for Jones.