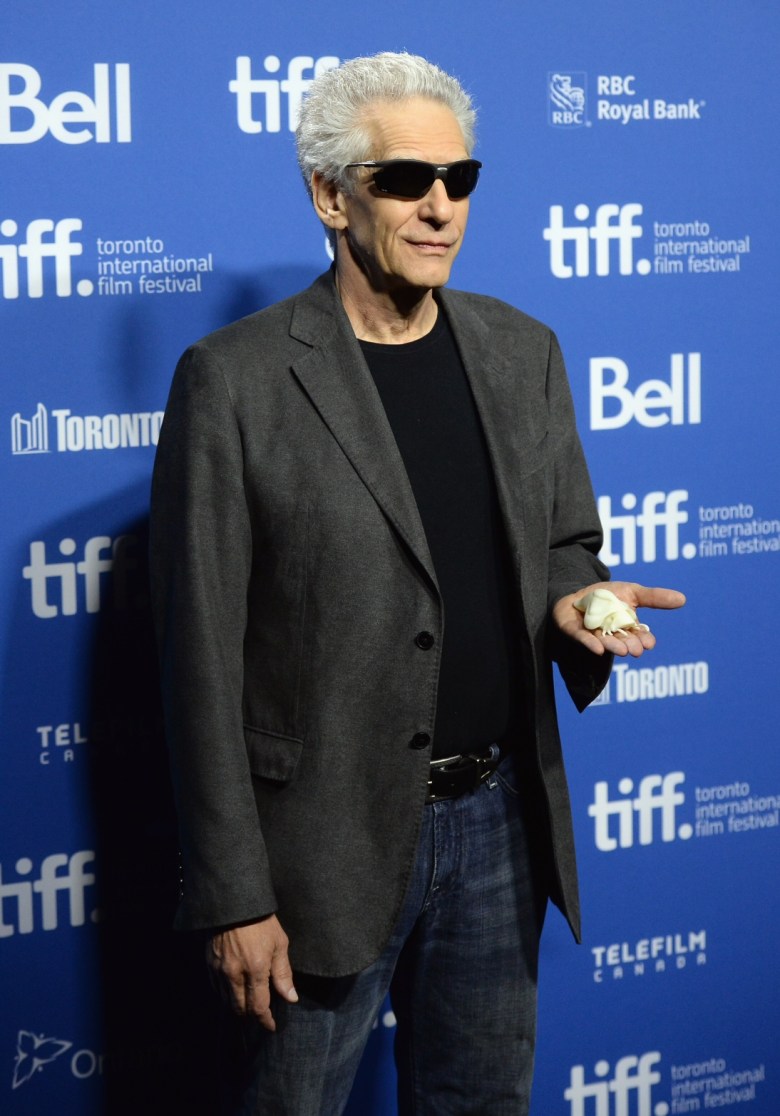 Despite a bevy of details announced about TIFF’s David Cronenberg Project at Thursday’s press conference, the most fascinating element remains shrouded in mystery. This is the POD (Personal-On-Demand) device that Cronenberg ‘revealed,’ in a minimalist sense of the word. It was hard to get a clear view of the small white POD that fit in the palm of the director’s hand, though it looked a little like an insectoid from one of his films if Steve Jobs was hired on as an art director. The only specifics he gave on it were that he named his “Frisky’,” he’s temperamental and likes a little water.

READ MORE: Ever Wanted to Live Inside a David Cronenberg Film? Now You Can With His New Project at TIFF

I was lucky enough to sit down briefly with Cronenberg following the press conference, and of course my first question was “Can you tell me more about Frisky?”

“I can’t. For two reasons: one I don’t want to spoil the surprise. The second thing is I don’t know enough about it because I’ve been making Map to the Stars. I think he (Lance Weiler, ‘experience designer’ of mind/body change) has some really interesting ideas for interactive connecting with the audience who would come to the exhibits but I don’t really know all the ins and outs of it, I really don’t. I don’t know what that experience is going to be like and I don’t think he’s totally finished it yet either, he’s got another month or so left to go so a lot of the stuff that’s going to happen doesn’t exist yet.”

Weiler and the curators of this multi-faceted, multimedia exhibition have gone to great lengths to create an experience that is supposed to simulate being inside a Cronenberg film, and this is clearly the most unique element. The cited films that inspired this invention include “Scanners,” “Videodrome,” and “eXistenZ.” What these movies have in common is protagonists losing grasp of what is real and what is being fed to their brain by an external source. “I’m proud to say I’m the first participant in this project” Cronenberg stated “and I look forward to having others join me in creating their very own PODs.”

It’s already difficult to tell what is real and what isn’t. Part of the purpose of the press conference was to direct people to www.bodymindchange.ca where they can register for their own PODs and learn vague details about the device and its creators. From what I could glean, the POD begins as cells in a lab, during this period you “teach the organism about your needs, loves and desires by engaging with stories, games and visual content.” After a 6 week gestation, the POD is ready for implantation and will then serve as a “recommendation engine” that will make the host “faster, smarter and healthier while improving sexual performance, and increasing the average life span.”

The site is very well done and uses a lot of technical terms like “bionanohybrid” that makes it all sound legit. It goes to great lengths to create a convincing story around BMC labs, though additional press materials acknowledge that this is a fictional company. I registered for my own POD, and never before have I read ‘terms and conditions’ so closely before clicking ‘Agree’ (no mention of live organisms being inserted into my body or risk of insanity). Registering for my own POD has already elicited feelings of fear and excitement and made me feel a bit like a character in a Cronenberg movie. I really have no idea what I’ve volunteered for.

He did mention one other somewhat ominous fact about Frisky during the press conference: “He looks innocuous, don’t be fooled.” So if my head ends up exploding, you can’t say I wasn’t warned.