Toronto Review: Frederick Wiseman's Sprawling 'At Berkeley' Is Educational, But Whose Side Is He On? 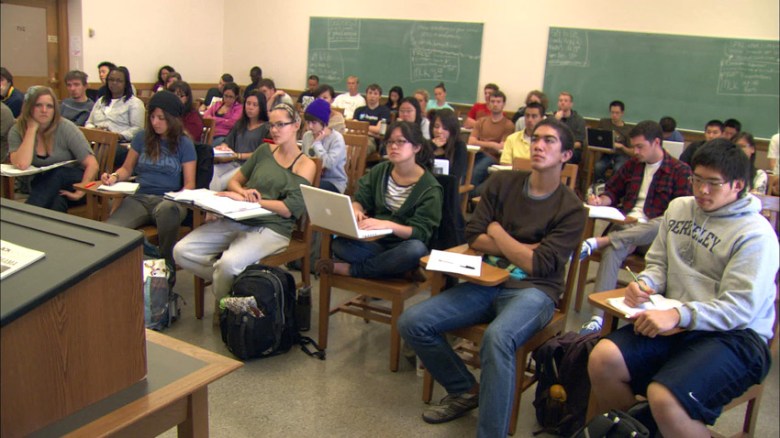 Frederick Wiseman has looked at institutions for decades – high school, the welfare department, public housing in New York, the US administration of the Panama Canal Zone. Now he’s given us “At Berkeley,” a look at the University of California at Berkeley, the premiere campus of what many consider to be the finest public university in the United States.

Once upon a time, UC Berkeley (Cal to locals) was free. Once upon a time it was the site of the Free Speech movement, led by Berkeley student Mario Savio. Now, as a state institution in a state under tremendous financial pressure, Berkeley is forced to slash its budget. That’s when Wiseman got there.

Wiseman finished shooting “At Berkeley” in late 2010; the finished product finally premiered this past week. Like all documentaries, Wiseman’s meditation on cost and compromise has been overtaken by current events – most notably by a worsening economy and by conservatives who resist any tax increases. And like all Wiseman documentaries, the long format still bears watching.

Wiseman requested permission to film at Berkeley, and was granted access by the chancellor, Robert Birgeneau, a physicist with an odd permanent smile on his face. The expression may come from telling so many professors that they won’t get tenure and informing so many students that tuition will be raised. Like it not, his is one of the human faces in the entire documentary. If this vast ensemble doc has a main character, he’s it.

In what Wiseman distilled from the 250 hours that he filmed, the camera hovers, as we expect. It shifts from meetings of the Cal administration – events that might require industrial strength No Doz in the hands of a lesser director – to zoology labs, labs testing prosthetic devices, performances at the Zellerbach Hall, and extended tours of the lawns and walkways. The campus is a pleasant place to be. Bear in mind that this is a public university, and Birgeneau is determined to prevent public education from becoming a low-quality entitlement spooned out like gruel to students considered unworthy of anything better.

We hear a lot on this subject in meetings. We also hear from students, mostly in classes and at demonstrations where they oppose fee increases and demand free education. Outrageous? The students do occupy the university library, but that’s almost three hours into the film. And they leave on their own accord.

Wiseman takes it all in, but don’t fall victim to the common error of ascribing objectivity to the veteran docmaker. Wiseman is a radical shaper and editor of his subjects. Using one-sixtieth of what he films, he edits with the severity of Harvey Weinstein, only more gracefully.

Wiseman’s perspective on these Berkeley conflicts – his warmth toward the administration — may be unexpected. Wouldn’t a filmmaker of his era, who observed student protests and individuals at the mercy of unfeeling opaque institutions, be expected to side with the students here?

The director clearly sympathizes with anyone bearing the financial burdens of paying for education, which now put unprecedented strains on the middle class. Wasn’t education one of the last middle-class entitlements? You see tears in the eyes of students who witness the benefits of the best and cheapest systems of higher education eroding away. We hear an angry black student tell the once-wealthy that there were always students whose families struggled to pay the bills.

Wiseman listens carefully to arguments made at endless administration meetings about furloughs, faculty compensation, child care assistance, the retention of lower income students and the delicate strategies to use law enforcement during protests. Listening to Cal adminitrators talk reasonably, it’s no surprise that Wiseman was persuaded. These are people closer to his own generation. You may be surprised that he stayed awake to hear them.

Has Frederick Wiseman, the patient filmmaker whose long documentaries listened to the voices of ordinary people in public housing and on welfare, gone over to the dark side of authority? He clearly gives credence to the Cal executives, but, as ever with Wiseman, he leaves plenty of footage with information that gives you a chance to make up your own mind.

Another question: Based on the proportion of women filmed by Wiseman in “At Berkeley,” you might think that the student body was 80% female.  That’s more a question of taste than reporting chops. Remember, Wiseman is the first person to say he’s not objective. He clearly likes attractive women — not a sin, even at 83. Looking at the demonstrations, all led by men, he shows us that some things still don’t change.

“At Berkeley” reminds us that a Berkeley education is a valuable asset, but also a valuable experience. Surveying the Berkeley lawns, Wiseman wants us to see how pleasant that experience can be. Going beyond Wiseman’s doc, you get a sense that fewer people will be on the lawn in the coming years. They will be too busy paying for it.