'Garth Marenghi's Darkplace' Is Horror at Its Worst, Comedy at Its Best 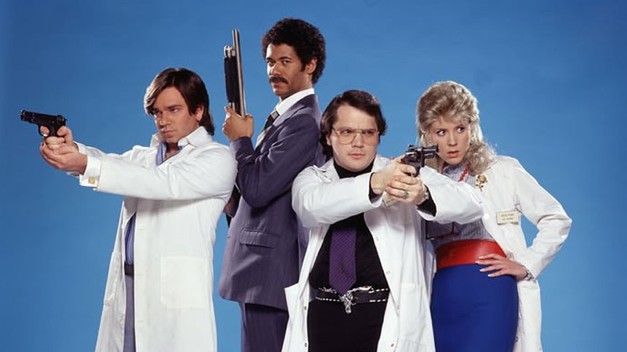 Plenty of publications have been using the month of October to celebrate the best in horror, but the A.V. Club’s Erik Adams went another way, celebrating the genre at its absolute worst. Garth Marenghi’s Darkplace is a retrospective that looks back at the short-lived supernatural hospital show created by and starring the titular “one-man fear factory.” It’s also, okay, a joke, a sublimely terrible parody of low-budget production values, inept acting and rampant ego.

The overwritten glory of Darkplace marks Garth Marenghi himself as the show’s crowning achievement. He possesses all of Stephen King’s prolificacy and none of his media savvy; he’s infected with the prickliness of a Harlan Ellison, but doesn’t have the talent or insight to back it up. All of Darkplace is filtered through Garth’s myopic perspective, which was molded over the course of two Perrier Award-nominated (and one Perrier Award-winning) theatrical productions at the Edinburgh Festival Fringe: Garth Marenghi’s Fright Knight and Garth Marenghi’s Netherhead.

At least one of Garth’s co-stars will be familiar to American audiences: His publisher, Dean Learner, played by Richard Ayoade, whose resume includes starring opposite Chris O’Dowd in the tech comedy series The I.T. Crowd, directing the Wes Andersonian coming-of-age tale Submarine and the forthcoming adaptation of Dostoevsky’s The Double, and being the only good thing about The Watch. He’s technically second fiddle here to Matt Holness, who plays the sublimely egocentric Marenghi. But his presence behind the camera is essential when it comes to realizing the hilarious badness of Darkplace‘s show within a show. Though it might seem otherwise, it takes tremendous skill to be bad on purpose, at least in a way that doesn’t seem merely amateurish. From its misplaced edits to flat performances and overripe dialogue, Darkplace is perfect in its imperfections.

The TV gods have not yet seen fit to give U.S. residents Darkplace on DVD, but the whole series is on YouTube. If you’d like to hear more from the writer of “Afterbirth, in which a mutated placenta attacks Bristol,” get streaming.