Review: Why Is Tobe Hooper's 'Djinn,' the First UAE-Produced Horror Film, Such A Terrible Movie? 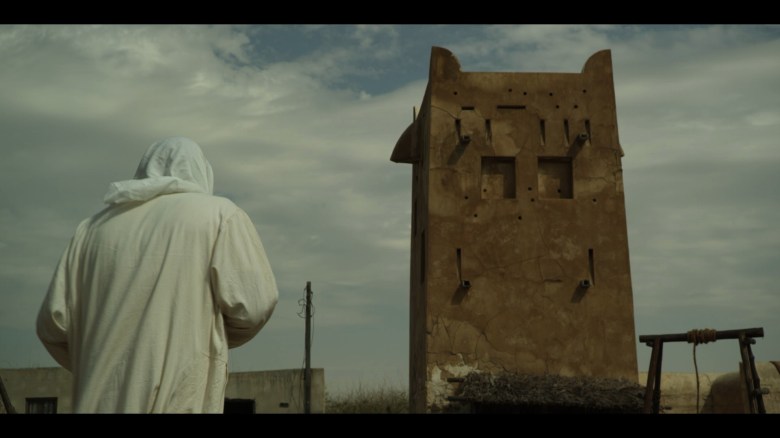 For the construction of then-Crown Prince of Dubai Mohammed bin Rashid Al Maktoum’s horseracing arenas in 2003, sand was flown from the notably sandy nation from the UK, of all places, its purity allegedly far superior to the native counterpart. When you’ve got the money to spare, you can afford to bring in the best. That’s the thinking, in slightly more thoughtful form, behind employing genre legend Tobe Hooper (“The Texas Chainsaw Massacre”) to direct “Djinn,” the first full-fledged horror feature in the United Arab Emirate’s burgeoning film industry, produced under the auspices of Image Nation. Long awaited and long expected, it’s been the source of no shortage of controversy for its two year-plus post-production process, in the course of which any number of rumors have emerged as to the cause of its delay, citing everything from extensive special effects work to political interference.

Whatever the real reasons behind “Djinn”‘s belated arrival, we can be sure it wasn’t held back for quality control: From its very first frame, expounding exposition over a shoddily-shot desert sequence, this is an unmitigated disaster of a movie, every bit as horrible as the events it attempts to portray. They involve the eponymous spirits, demonic beings — per the Qur’an — forged of fire who slip surreptitiously into the world of the living and torment at will. Played — in their better scenes — with passable personality by Khalid Laith and Razane Jammal, their targets here are Khalid and Salama, UAE expatriates in the US struggling to cope with the recent loss of an infant child who move to a lavish new apartment building outside Abu Dhabi.

Conspicuous by his absence from Friday night’s world premiere, it’s unclear just how much of the blame for this titanic trainwreck is to be leveled at Hooper’s feet. Accounts of set visits to the filming of “integral” scenes now nowhere to be found in the finished product — coupled with the well-documented difficulties of the journey from set to screen itself — suggest at least some level of interference, but if there’s a single shot in the final film for which Hooper called cut he ought to be ashamed. Tonally as well as technically, this is an atrocious excuse for a movie that would be strikingly bad from a first-timer. Indeed, it’s not so much “Djinn” as it is “The Tobe Hooper Massacre”: a repudiation of reputation that not only fails to remind us of the heights this director once scaled, but actively invites us to wonder if it’s not just our spectacles’ curiously rosy hue misinforming our recollection.

But let’s not lean too hard on Tobe, much as he may deserve it for not — at the very least — insisting outright upon an Alan Smithee. Hitchcock couldn’t have helped much with a script as insistently uninventive as David Tully’s, which takes the opportunity to act as a jumping-off point for an entire new industry and instead imports beat-for-beat the worst of the worst of the worst of American horror cinema. Every scare here is an insult to that word, either indulging in the aggravating quiet-loud contrast that invokes as valid an emotional response as does an onion to the eye or any amount of absurdly old-hat imagery: shapes leaning in from the wall; creepy-faced kids’ toys; mysteriously-moving rocking chairs.

“Djinn” represents, in the end, a fundamental failure to capitalize on the chance for a particularly culturally-rooted new breed of horror film. It becomes, instead, a laughing stock that will do well to rouse a single genuine scare in its entire theatrical lifespan.

Perhaps, in a sense, that’s the thinking here: the only people who could conceivably be frightened are those who’ve never before seen a horror film, a sure bet in a country yet to have one. Except it’s not: the one thing “Djinn” gets right, in its production as much as its plot as much as the city it sets itself beside, is the immense internationality of the world today. This was never to be the first horror movie, but the first Emirati horror, the first effort in the genre to tap the nation’s considerable mythological resources for an interesting new twist on well-worn tropes.

A popular theory behind the movie’s delay, following the paradigm shift in the Arab world, involves the prospect of a project as significant as this being in foreign hands as the source of some shame. The theory’s merits we’ll likely never know; the shame, at least, we can certify.

HOW WILL IT PLAY? Negative native reactions to Friday night’s premiere suggest a grim fate ahead for the UAE release on Halloween. Stateside, Hooper’s horror prestige and a novel concept should see some support from genre audiences, though a high ratio of Arabic dialogue and less-than-stellar early word may confine any small success to VOD sales.