Spike Jonze, Why Are There No Brown People in Your Future Los Angeles? 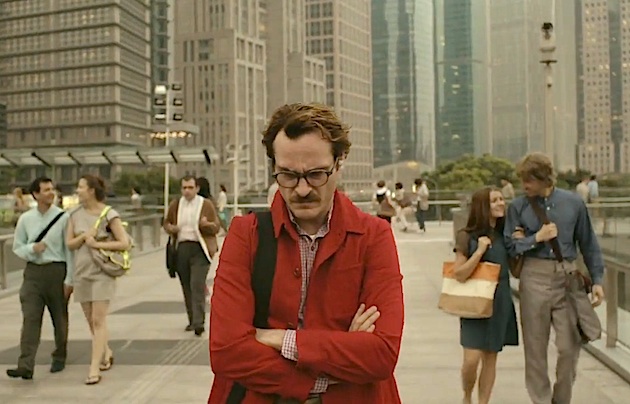 At the New York Film Festival this weekend, Spike Jonze created a sensation with his film “Her,” the festival’s closing night selection that features Joaquin Phoenix as Theodore Twombly, a man who falls in love with a voice-input, voice-output operating system named Samantha, voiced by Scarlett Johansson.

Twombly comes into his relationship with Samantha after a devestating divorce.  He spends his days at work as a wordsmith at a company called BeautifulHandmadeLetters.com which creates heartfelt letters for those that are less talented with words to send to their loved ones.  When his work day is over, he heads home to a gorgeous condo building and plays video games.

At the press screening Q&A for the film, Jonze, who wrote and directed the film, said that as life continues to get better for people, especially in New York and Los Angeles (a point he was not pressed to elaborate upon), people are simultaneously becoming more and more tethered to their technological communication platform.

READ MORE: Review: Why Spike Jonze’s Weird And Wonderful Technological Romance ‘Her’ Is One of the Best Studio Movies of the Year

In discussing his inspiration for the imagined future world for “Her,” Jonze said he spoke with Lincoln Center and Highline architect Liz Diller and she asked him if he wanted the film to be a utopian or dystopian story.  He didn’t divulge his answer to that question, but he did explain that the question helped him understand what he should do in creating the atmosphere for the film.

I’d like to answer Diller’s question myself:  Jonze has made a dystopia of gentrification.

It is not until late in the film when Twombly decides to go to Catalina Island that one realizes that the film is set in a Los Angeles not too far in the future.  This is surprising because the exteriors are shot in Shanghai, and there don’t seem to be any Latino people in the whole damn film.  The main cast of characters is all white, except for a few East Asian-American women who serve as women for the core crew to date.

On one level, this is not surprising.  “Her” is a studio film, and Hollywood, to put it lightly, does not depict America as it can be seen on its streets.  Jonze also doesn’t really have a reputation for being attuned to the world’s diversity in his filmography otherwise.

But this is a film that creates a world here a hipster handwritten letter company is a viable business able to rent out a large office in a skyscraper.  In this near future, poverty is invisible and Los Angeles’s nearly 50% Latino/Hispanic population has disappeared.

Jonze is so invested in the same techno-Orientalism that inspired cyberpunk culture that Los Angeles’s own buildings do not embody its own future well enough; one must go to the imagined epicenter of tech capital, East Asia, to shoot believable skylines.

That being said, “Her” is an astute observation of how many users interact and rely on information and communication technologies.  I, in fact, loved the film.  It’s funny and sweet without being sentimental or overdetermined about a thesis on humans’ relationship to technology.  The performances are great, too.  Phoenix is in the whole film and he is captivating.

But in the interest of simplifying the film’s story, the fat was cut, and the fat was Los Angeles as it truly is, a city with a minority white population and the same income inequality that plagues the rest of the country.

Perhaps this would be fine if this was just one solitary cultural object.  “Her” is a part of a larger cultural beast, recently documented in George Packer’s recent New Yorker piece on Silicon Valley’s new politics.  Here is his comparison of the valley in 1978 and 2013:

The neighborhoods of the Santa Clara Valley were
dotted with cheap, modern, one-story houses—called Eichlers, after the
builder Joseph Eichler—with glass walls, open floor plans, and
flat-roofed carports. (Steve Jobs grew up in an imitation Eichler,
called a Likeler.) The average house in Palo Alto cost about a hundred
and twenty-five thousand dollars. Along the main downtown street,
University Avenue—the future address of PayPal, Facebook, and
Google—were sports shops, discount variety stores, and several art-house
cinemas, together with the shuttered, X-rated Paris Theatre. Across El
Camino Real, the Stanford Shopping Center was anchored by Macy’s and
Woolworth’s, with one boutique store—a Victoria’s Secret had opened in
1977—and a parking lot full of Datsuns and Chevy Novas. High-end dining
was virtually unknown in Palo Alto, as was the adjective “high-end.” The
public schools in the area were excellent and almost universally
attended; the few kids I knew who went to private school had somehow
messed up. The Valley was thoroughly middle class, egalitarian,
pleasant, and a little boring.

Thirty-five years later, the
average house in Palo Alto sells for more than two million dollars. The
Stanford Shopping Center’s parking lot is a sea of Lexuses and Audis,
and their owners are shopping at Burberry and Louis Vuitton. There are
fifty or so billionaires and tens of thousands of millionaires in
Silicon Valley; last year’s Facebook public stock offering alone created
half a dozen more of the former and more than a thousand of the latter.
There are also record numbers of poor people, and the past two years
have seen a twenty-per-cent rise in homelessness, largely because of the
soaring cost of housing. After decades in which the country has become
less and less equal, Silicon Valley is one of the most unequal places in
America.

As Silicon Valley goes, so goes our imagined future in films like “Her.”  Is it time for us to take note and listen to who we’re writing out of the future?

This Article is related to: Features and tagged Her, Spike Jonze