What Makes a Regional Film Festival Worth Attending? For Woodstock, It's the Casual Vibes 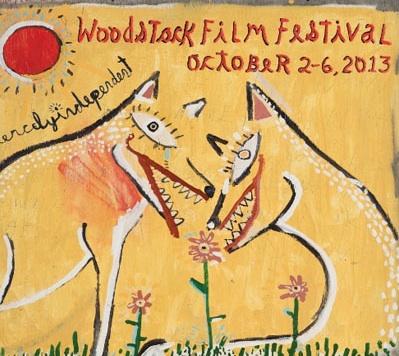 For 14 years, the Woodstock Film Festival has carried the tagline “fiercely independent.” That remains an appropriate description of its appeal: Featuring almost 150 events this year through panels, films, concerts, and parties, the festival is an inviting place meant to dim the pressures of the industry while still providing networking opportunities. New and experienced peers of the film world’s many creative departments can mingle freely.

“There is no class system here at the festival,” Woodstock founder Meira Blaustein told Indiewire. “I’ve heard people say that they have met others they never thought they’d meet because it’s so relaxed here.”

Filmmakers and producers at this year’s festival echoed the sentiment. Associate producer Casper de Boer, who screened “God Loves Uganda” — a striking film following conservative American evangelical missionaries in Uganda trying to preach what some groups consider harmful — was happy to share the festival with local friends.  “You find a connection with the audience,” he said. “Some of the key people from the film are from around here. It’s nice to see that that the audience isn’t just strangers.”

Adam Rodgers, director and co-writer of the comedy and Woodstock east coast premiere “At Middleton,” gushed, “It’s the perfect place to have a film festival.”  The film, which stars festival attendees Vera Farmiga and Andy Garcia as newly introduced parents on a blossoming escape from their children’s college tour, contains an enthusiastic quality that matches the maverick Woodstock vibe.

Guests can appreciate the availability of the New York Catskill region.  Though other festival venues are a short drive away in the surrounding towns of Saugerties, Kingston, Rhinebeck, and Rosendale, Blaustein said it provided an opportunity to branch beyond Woodstock. “You become engulfed in the community,” she explained. “You have people coming from all over and the community right here that’s grown so much in the last few years.”

Also supported by the Hudson Valley Film Commission, this upstate region has become a respected host for productions, exhibited proudly through the “Hudson Valley” focus of the festival program. Eddie Mullin’s “Doomsdays” is, as Blaustein explained it, an “off the grid” story of house-hoppers who have pushed society away only to find their new company confusing their senses.  The script stretches for cleverness, but the locations are wholesome and fitting. Other features that shared the hometown spirit included Rob Meyer’s narrative “A Birder’s Guide to Everything,” David Becker’s documentary “To Be Forever Wild, and shorts such as Davis Hall’s “In the Blind” and Vladimir de Fontenay’s “Mobile Homes.”

Along with “God Loves Uganda,” Jim Mickle’s “Hudson Valley” film “We Are What We Are” — an elegantly restrained tale of a family with a bloody secret — exemplifies some of the bold local content that this year’s festival offered up.  “I like it to always be eclectic,” said Blaustein. Perhaps most indicative of the range of tastes represented by the festival program was “The Great Chicken Wing Hunt”: Director Matt Reynolds achieves the high level of humor and heart you hope for in a movie about a group in search of the best New York State buffalo wings.

Despite its isolated feel away from the urban grind, the festival has started to incorporate a greater social media and technology presence, as visitors texted, tweeted, Instragrammed, and blogged at the festival in full force. Forward-looking panels included “Making Television for the Internet” and “How to Crowdfund Your Project.” Slava Rubin, CEO and co-founder of crowdfunding site IndieGogo, provided a keynote speech on alternative financing for indie film, with methods attuned to a kind of freedom embraced by the festival itself. At the end of the day, the 2013 Woodstock Film Festival was as punchy in theme as it was hospitable.

Woodstock’s award winners can be found on the next page.

Honorable Mention: UNDER THE SAME SUN directed by Sameh Zoabi

A TIE for Best Documentary Feature:

This Article is related to: Festivals and tagged Festivals, God Loves Uganda, We Are What We Are, Woodstock Film Festival