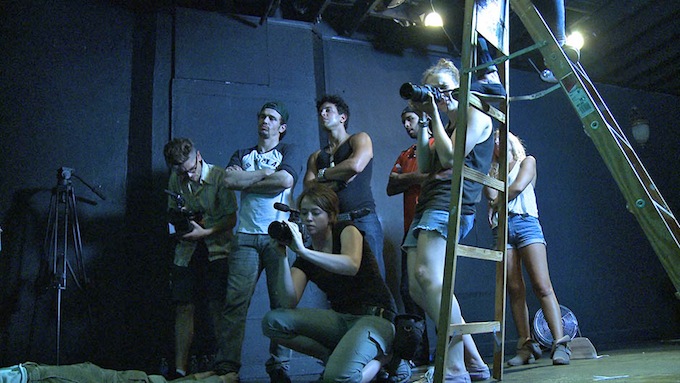 “The 2014 Cinema Eye Honors Heterodox nominees prove once again that
the contested space between narrative and documentary is the ideal
cinematic environment to delve deep into our most modern tensions,” said
Esther Robinson, Chair of the Cinema Eye Honors. “Bringing us to
settings as diverse as rural Mexico, dystopian Disneyland, and a
forgotten leather bar, these films break convention to move us
thrillingly out of our doctrinaire cinema comfort zone.”

The 2014 Heterodox Award will be presented at the 7th Annual Cinema Eye Honors for Nonfiction Filmmaking on January 8, 2014,  at the Museum of the Moving Image in Astoria, Queens, New York. You can read the entire list of nominations for this year’s Cinema Eye Honors here.  Below is an expanded look at the five Heterodox nominees, with descriptions provided by Cinema Eye Honor:

Escape From Tomorrow
Directed by Randy Moore
The copyrighted images of the Walt Disney Corporation are deliciously appropriated by Randy Moore for his comic fantasia, Escape from Tomorrow. Shot secretly using consumer DSLRs and a stealth crew at real Disney theme parks, the film is both a hilarious psychosexual comedy and, with its legal provocation, a demonstration of how our childhood memories are the stuff of intellectual property disputes.

Interior. Leather Bar.
Directed by James Franco and Travis Matthews
Some 40 minutes of gay S&M footage was purportedly deleted from William Friedkin’s 1980 feature Cruising, and it is this lost material that inspires Travis Matthews and James Franco’s Interior. Leather Bar. What initially feels like a behind-the-scenes documentary about the recreation of these scenes turns into something very different as the film plumbs issues of sexual anxiety, the cinematic history of gay representation and the power of celebrity.

Neighboring Sounds
Directed by Kleber Mendonça Filho
The social strata of a Brazilian seaside high-rise are depicted with a hallucinatory tension in Kleber Mendonça Filho’s Neighboring Sounds. When a wealthy apartment complex — the director’s own — is hit by a series of crimes, a private security firm creates its own unease in a film that cooly captures a society amidst economic and cultural transformation.

Post Tenebras Lux
Directed by Carlos Reygadas
Boundaries between documentary and fiction, myth and autobiography are elided in Post Tenebras Lux, a seductively mysterious feature from Carlos Reygadas. A rich family moving to a mountainside home in a poor Mexican village face a series of psychic disruptions in this visually ravishing, deeply experimental work.