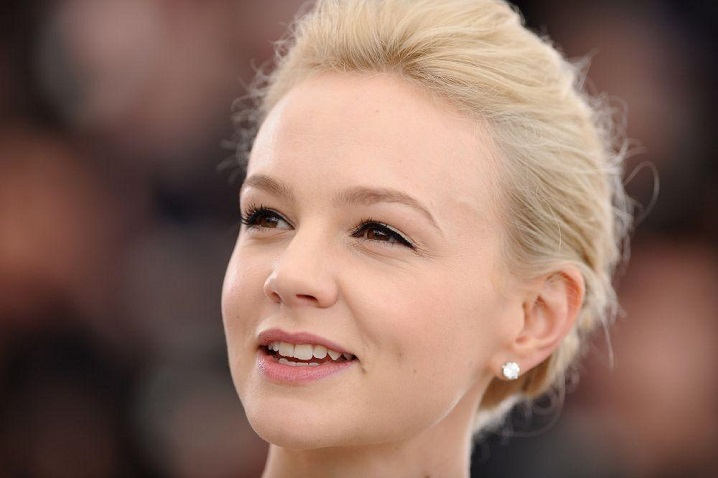 Carey Mulligan is an actress in demand. Nowhere was that more evident than at this year’s Cannes Film Festival where Mulligan was on hand to promote two high profile entries, opening night selection “The Great Gatsby,” and the Coen brothers’ latest “Inside Llewyn Davis,” which walked away with the Grand Prix prize.

Since nabbing an Oscar nomination for her breakthrough turn in “An Education,” Mulligan has stuck to ‘auteur-ish’ projects from the revered likes of Steve McQueen (“Shame”), Nicolas Winding Refn (“Drive”) and Oliver Stone (“Wall Street: Money Never Sleeps”). In “Inside Llewyn Davis” (which opened in select theaters last Friday and goes wide December 20), Mulligan is barely unrecognizable under a mop of long black hair as Jean, the bitter and potty mouthed ex-flame of the titular folk artist, played by Oscar Isaac. Up next for the actress is Thomas Vinterberg’s adaptation of “Far From the Madding Crowd.”

READ
MORE: The Coen Brothers and T-Bone Burnett on Reuniting for ‘Inside
Llewyn Davis’ Soundtrack and Whether It Can Match Success of ‘O Brother’

Mulligan called Indiewire from LA to discuss working with the Coens and her amazing run this year. 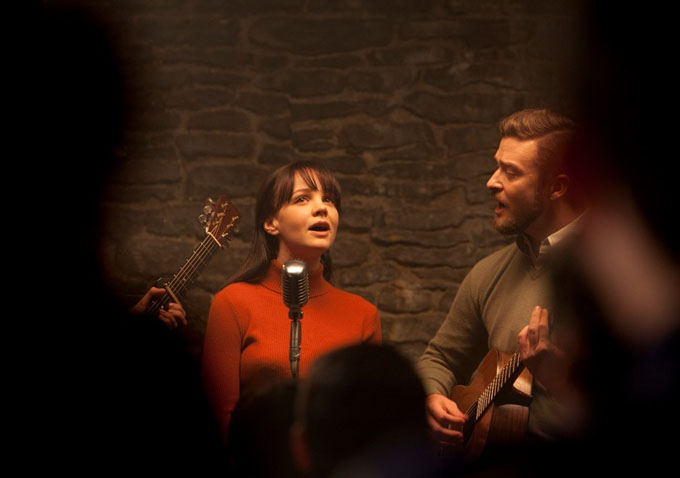 You were quite the belle of the ball at Cannes this year. What was that whole whirlwind like?

It was so much fun this time. I’ve been there a couple of years before with “Wall Street” and was kind of overwhelmed by the whole thing, much more nervous. This time I was really excited to be with the people I was with. Getting to go there with two totally different films was really amazing, and getting to do it with people I really, really liked… I like the thing about Cannes where you all stand together as a cast on the carpet and represent your film together. I had two totally amazing moments, thinking how lucky I was to be working with these groups of people.

You’ve come such a long way since “An Education.” Do you pinch yourself sometimes?

Yeah, to get to work with Baz (Luhrmann) and the Coen brothers in the same year was amazing. I have pinch me moments constantly. At a certain point you have to acknowledge how bizarre it is to be in a film with Leonardo DiCaprio who’s the actor you grew up watching in movies. I saw him in “Romeo & Juliet” when I was 15-years-old and thought it was the best movie I’d ever seen, and so acting with him was surreal. It was a heightened experience being in that place.

You’re married to a musician (Marcus Mumford, who contributed to the soundtrack). Did your obvious love of music play into you wanting to make this film? 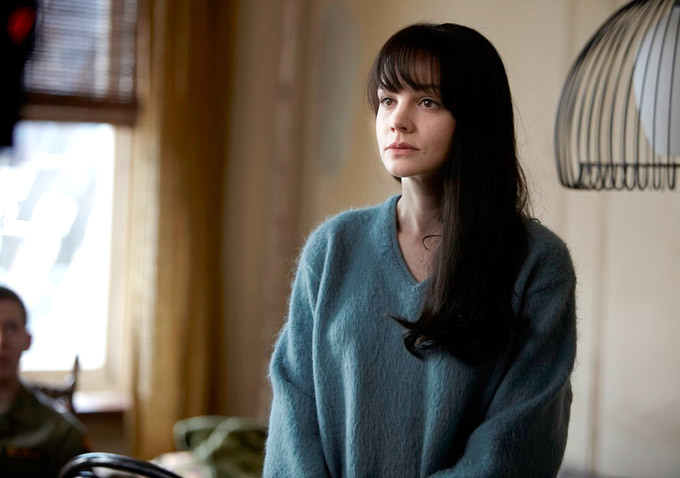 I liked folk music a lot but it was the character that drew me. I never, ever dreamed that I would get to be in a Coen brothers film. Maybe because I’m English, I just never thought it would happen. Just to get to audition for them was amazing. I spoke with them on the phone and I don’t remember any of it because I was so nervous. I got the job and then didn’t meet with them for four months. So it was strange. The first time I met them was in the rehearsal room for the music.

What led to the Coens even thinking of you for the role? You’re not known for playing such hard edged characters.

Ethan said in Cannes that he’d seen “An Education” and he thought it’d be really funny to see me play a horribly rude person. That really did seem to tickle him while we were filming. We’d film it and he’d push me to be nastier and swear more and be more unpleasant. He found that hilarious (laughs). I think that is where it came from. They saw me as someone who plays sweet people. 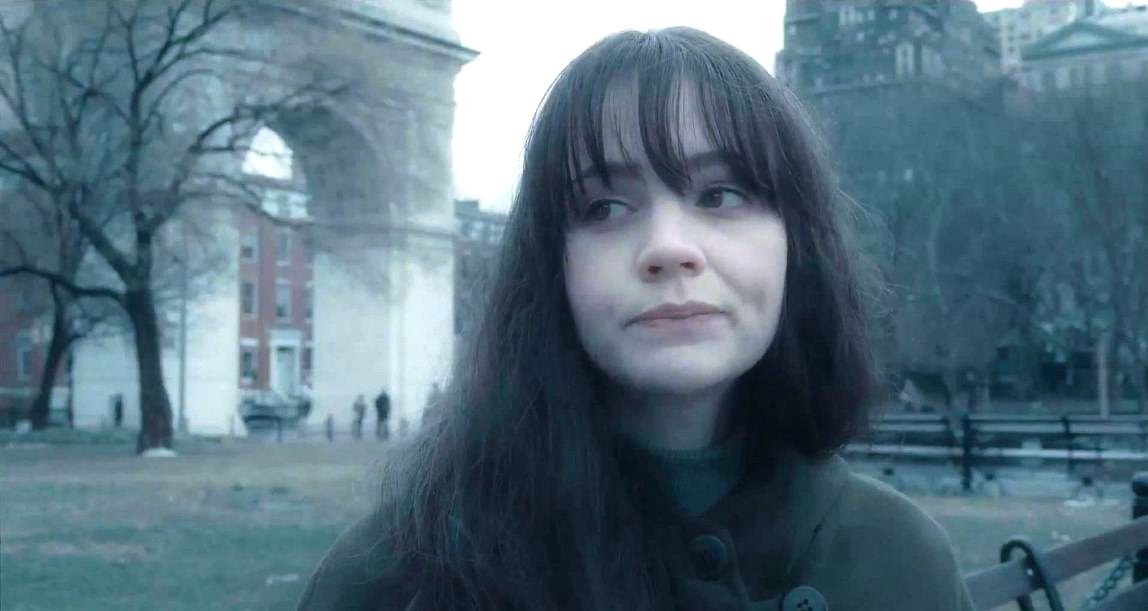 Did you enjoy playing someone so unpleasant?

I loved it. I felt like I couldn’t be working with better filmmakers. They are the best at what they do. So I felt really calm. First of all I was so relaxed because I’d worked with Oscar before, so I knew him and loved him. And then when we were filming we could do anything, and with the Coens brothers standing there you know you wouldn’t mess up because they’re always so good. They’ll reign you in or push you in the right direction. So I just kind of let loose. It was so freeing and so great after “Gatsby,” which had been an amazing experience and I loved it, but it was a totally different film. I was required to wear dresses and look pretty everyday for six months. To switch to a tiny film in New York where I just bumped around wearing a big black wig was exactly what I wanted.

Was it easy to let loose on stage during the singing bits, where you had to share the screen with a superstar like Justin Timberlake?

It was in the end. First of all I walked into the music rehearsals quite nervous just by being the only non musician. But everyone was so warm and lovely and encouraging. Then I switched gears going ‘I’m not a singer, no one’s expecting me to be,’ so it was fine. And then in the end I loved it. I had so much fun. I thought Justin was hilarious as Jim. We played off each other and really enjoyed it in the end.

READ MORE: Oscar Isaac Gets Locked Out With a Cat in Exclusive Scene From ‘Inside Llewyn Davis’

How did shooting the musical portions in this film compare to the centerpiece one in “Shame”? 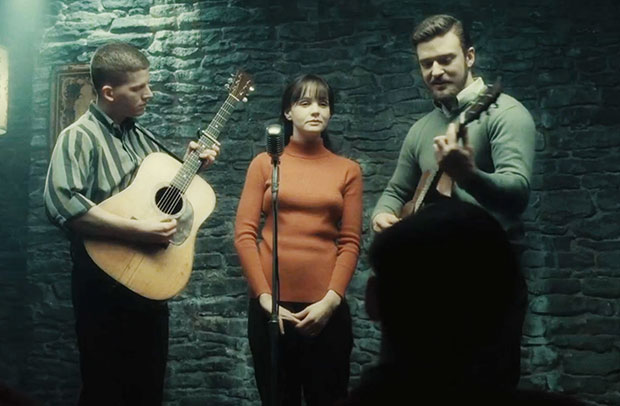 “Shame” was a lot more, I spent a lot more time working on that. We had rehearsals, Steve composed the arrangement with the composer. It was a lengthy process. The idea was to use one take so the pressure on that was far greater. And the whole scene was about her giving a message to her brother and all of the stuff going on underneath, so it was much more difficult. The Coen brothers were just fun. It was really fun and relaxing (laughs).

CBS Films has been having a lot of fun promoting the film and pushing it into awards season with live concert events. Has it made the junket process more enjoyable for you?

It helps but it’s nice going around when people like the film. It’s nice when people love the film and talk about it. The concert was amazing. To get to be there and just to watch Patti Smith and co. perform from the side of the stage was such a privilege. To be in it was terrifying but a couple shots of whiskey and I was on my way. It’s the same feeling I had in Cannes. To get to stand on the carpet with these people is really wonderful. To get to see people discover Oscar for real is really exciting and I love watching people’s reaction to his performance in the film. That’s been my favorite experience.