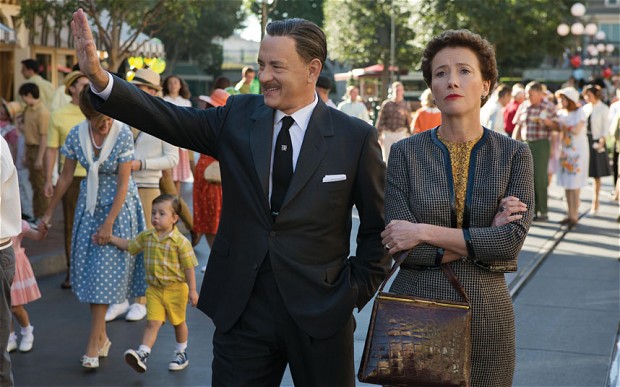 Mary Poppins meant nothing to me as a child. I’d never read the book and didn’t love the movie. I
didn’t actively dislike the film the way I did The Sound of Music, and in hindsight it was probably all that Julie Andrews goody-goody-ness that made me gag. Whatever . . .  the encouraging scene in the trailer for Saving Mr. Banks has Emma Thompson, as the recalcitrant author P.L. Travers, telling her agent why she does not want Walt Disney to put her heroine on screen. “I know what he’ll do to her — she’ll
be cavorting and twinkling,” she says, with great derision. Finally, someone who gets it.

That hope for the film isn’t misplaced, because Thompson is its bracing spine, her Travers as tightly wound as her crimped, unflattering perm  — the perfect visual sign of her rigorous holdon her emotions and her work. Thompson is so delightfully acerbic and convincing that she makes Saving Mr. Banks safe for people who find Disney films too saccharine.

Travers arrives in Los Angeles so that Walt — he insists on
being called Walt, she insists on being called Mrs. Travers — can try to charm
and twist her arm to get the rights to the film. Tom Hanks plays Disney with a
twinkle in his eye, as if both the actor and the character are tickled at the
idea that he is the man who created ever-happy Disneyland. (Who can blame him?)

The best scenes are in the rehearsal room, where Travers goes
into battle against the creative team. Bradley Whitford plays the likeable
writer Don DaGradi. As the brothers who composed the score, Jason Schwartzman is
the cheerful Richard Sherman, and B.J. Novak the crankier Robert. All are utterly charming as they sing anddance and act out scenes, essentially auditioning their work for the scowling Travers,who never wanted the film to be a musical in the first place.

Side Effects Warning: Songs
from Mary Poppins are likely to run through your head for days. Symptoms may include
A Spoonful of Sugar, Let’s Go Fly a Kite, and Feed the Birds.

Free sample: here’s a three-minute
feature about the music, with comments from the real Richard Sherman.

The film’s emotional undercurrent comes from the sparingly
used yet effective flashbacks to Travers’ childhood in Australia, with Colin
Farrell as her charming, drunken, irresponsible yet imaginative and much-loved father,
Travers Goff. It’s not news that children’s books often come from a dark place
in the soul, but watching the young Helen Goff before she transformed herself into
P.L. Travers — adoring her hapless father, trying to save her suicidal mother —
is an acutely-drawn reminder. And it’s a nice touch to have Aunt Ellie (Rachel
Griffiths) arrive to help, standing at the door holding a parrot-handled umbrella.

Walt understands how much Travers must have loved her father
to have chosen his name as her pen-name, and it may be that connection that
finally wins her over. (That and dancing with the Shermans.) Hanks gets his Oscar-bait
scene when he tells Travers about his own modest childhood, and that his desire  to be successful is a tribute to own hard-working
father. Saving Mr. Banks is, after
all, a Disney film too, so there has to be a big, heart-tugging turning point
near the end. If you’re a person who cries at movies, this is your cue.

John Lee Hancock, who directed The Blind Side, similarly holds back the treacle for quite a while
here. But eventually he has to give in. Really, Travers’ affection for a giant
stuffed Mickey Mouse goes too far. And the film looks as bright, sunny and undistinguished
as any movie Disney cranked out in the ’60s.

Hancock is not an adventurous director, but this is not an
adventurous film. It is, however, so entertaining that it will win you over. In fact, it did the nearly-impossible; it made me want to see Mary Poppins
again. (Don’t mention The Sound of
Music, in any iteration.)

Do stay through the credits. As we see in the film, Travers insisted
that Disney keep a record of her conversations with DaGradi and the Shermans,
and Saving Mr. Banks ends with audio
from those sessions. It is a hoot for us to hear the real Travers, but you can
see why people in the room would have had a very different opinion.