Review: Why Spike Jonze's Weird and Wonderful Technological Romance 'Her' Is One of the Best Studio Romances of the Year 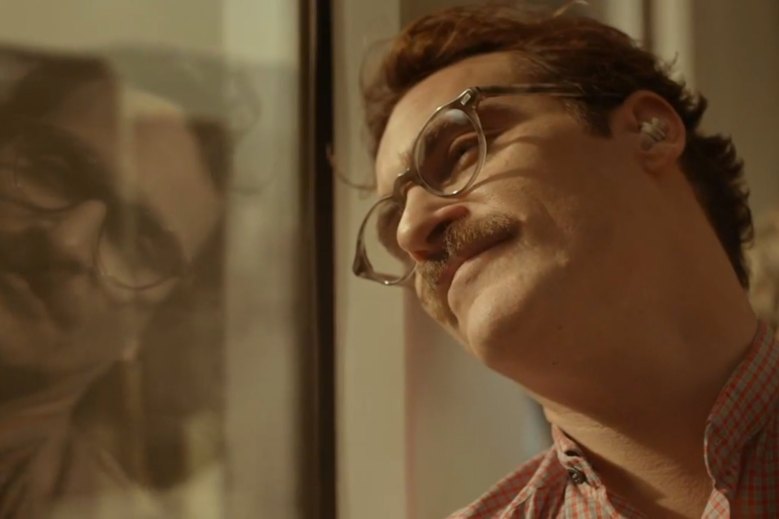 The only truly predictable aspect of Spike Jonze’s “Her” is that it features a bizarre premise: In a very near future, recently divorced L.A. writer Theodore Twombly (Joaquin Phoenix) downloads a new operating system for his computer with the ability to think (delicately voiced by Scarlett Johansson) and quickly falls in love with her. In a time of talking smartphones and rampant interconnectivity, the idea certainly has an inquisitive edge, but it’s not just a cheeky provocation; Jonze infuses it with genuine passion.

As the peculiar romance plays out in surprisingly believable terms, the writer-director depicts a world that blatantly echoes our own, where sleek, all-encompassing technological immersion dominates every crevice of daily life. Even so, it’s never the dour, epistemological investigation one might expect from the auteur behind creepy and surreal headtrips of “Being John Malkovich” and “Adaptation.” If less adventurous than Jonze’s earlier narratives, “Her” contains a far greater synthesis of imaginative effects and sentimentality than his previous studio effort, “Where the Wild Things Are.” Certainly his most deeply felt achievement, “Her” is both distinctly Jonze-like and something altogether different, as if the filmmaker has gone through a software update not unlike his artificial character.

An impressive achievement for Jonze in his first solo writing credit, “Her” suggests the director’s main takeaway from his studio travails on “Wild Things” was learning how to work the system. There’s no sense of compromise to his oddball love story. Rather than navigating between eccentric touches and accessibility, Jonze has it both ways: “Her” is both a well-rounded commercial romance and a capricious exploration of technology’s impact on identity in the information age.

When we first see Theodore in unflattering closeup, the mustachioed sad sack is dictating one of the innumerable canned love letters that he composes for his drab job at Beautiful Handmade Letters.com, an ironic title for a company exclusively involved in digital production. Despite that scene-setter, “Her” is neither workplace satire nor highfalutin treatise on the death of physical media. As the story fleshes out Theordore’s solitary life, his conundrum has a familiar rhythm: He lies around in his cramped apartment haunted by flashbacks of his ex (Rooney Mara) and engages in lazy, hilariously unsatisfying phone sex. There’s a gentle, melancholic quality to Theodore’s routine as he goes through the motions of an unremarkable life — until the day his new operating system arrives, asks him a few mechanical questions and promptly launches his new digital companion, who calls herself Samantha.

As voiced by Johansson, Samantha’s an immediately likable, upbeat presence capable of rejuvenating Theodore’s existence by providing him with the kindhearted girl of his dreams. Of course, that illusion starts to fray once the natural boundaries between the unrestrained powers of computer processing and the limitations of human intellect grow more distinct. “You know me so well!” Theodore chuckles as Samantha sifts through his hard drive. Indeed, she’s simultaneously in control of his life and outside of it, a gulf made gradually apparent as the movie continues to complicate its invisible feminine protagonist.

While Samantha remains unseen, however, Phoenix carries much of the movie with his restrained performance. As he spends so much time essentially talking to himself, “Her” provides the actor with room to foreground his softer side after a string of more unruly turns, and it’s a welcome alternative. The rest of cast play only minor roles in this unfolding state of affairs, though Amy Adams manages a few bittersweet scenes as Theodore’s similarly alienated and heartbroken neighbor.

For the most part, however, “Her” hums along on the strengths of Jonze’s unassuming script and a slickly realized world. The visual sheen owes much to cinematographer Hoyte Van Hoytema (“Tinker, Tailor, Soldier, Spy”), who lights scenes with a bright, polished look that echoes the utopian ideals of so many computer advertisements without overstating their cheap bids at lyricism. Rather than devising an impressionistic vision of the future, Jonze delivers a muted take on what things might actually look like not too far down the road.

Set designer K.K. Barrett litters the environment with neon colors and takes advantage of wide open spaces — Jonze has said he was inspired by the interior design of Jamba Juice — and the imagery benefits from the obviously robust digital resources. At home, Theodore spends his evenings playing a holographic video game that includes a vulgar scene-stealing virtual character who at one point engages in a dialogue with Samantha that marks the funniest scene in Jonze’s filmography. 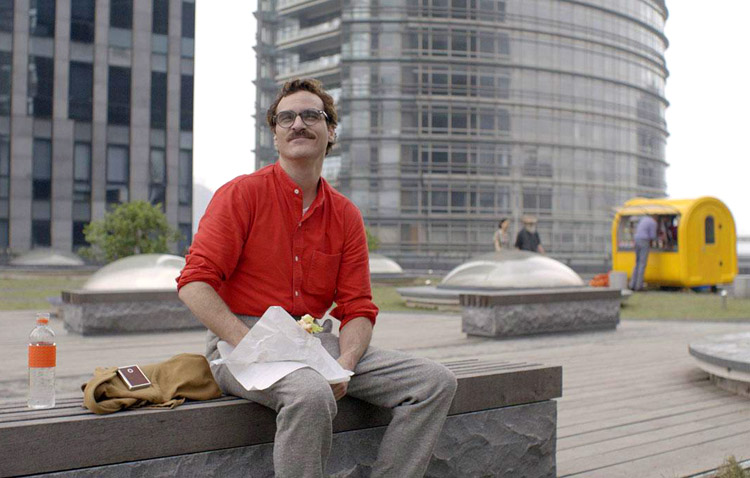 All of these ingredients lead to an impressive milieu, but it’s the developing relationship between Theodore and Samantha that gives the move an accessible center. As their ongoing discussions grow increasingly abstract and the computer develops feelings for her host, “Her” hints at the prospects of a cyber twist on Richard Linklater’s “Before” trilogy. It’s easy to get caught up in their soul-searching discourse. “I caught myself having feelings about the world,” Samantha confesses, which signals the arrival of headier conversations further down the line.

Nevertheless, once Jonze lays out these elements, “Her” makes clear that under its fancy dressing lies the makings of a formulaic romance. At times, the sentimentalism suffers from the simplistic fundamentals of the drama, but Jonze makes sure the heartstring tugs earn their place. While Theodore sometimes makes enigmatic choices, he remains a vivid enough creation to root the strange qualities of the scenario in a plausible foundation.

Despite the expectations Jonze brings to the table, “Her” contains no outlandish existential digressions or structural trickery. There are echoes of the Zoe Kazan-script “Ruby Sparks” in the slow-burning tension between Theodore’s expectations of his robotic companion and Samantha’s evolving individuality, but the true companion piece to “Her” is Jonze’s 2010 short film “I’m Here,” which centers on a romance between two characters who wear boxes on their heads.

Of course, with the rising awareness of chatty iPhone software like Siri and the role of technology in defining routine, “Her” implies much about the pratfalls of organizational progress, but its outlook is never overwhelmingly grim. Instead, Jonze depicts the interior life afforded by new media as a force that blends danger and excitement, enabling his movie to chronicle a romance that every computer-savvy communicator has experienced to some degree. Despite its science fiction backdrop, “Her” derives its chief appeal from the paradoxes of the present.

HOW WILL IT PLAY? A definite crowd pleaser since making its world premiere as the closing night selection of the New York Film Festival, “Her” will be released by Warner Bros. on Wednesday. Strong reviews coupled with Jonze’s fan base and the intriguing premise should yield solid box office returns through the holidays. Its awards season remain solid; it’s not a front-runner in any major category, though Scarlett Johannson has an intriguing shot at landing in the best actress race.

A version of this review ran during the New York Film Festival.