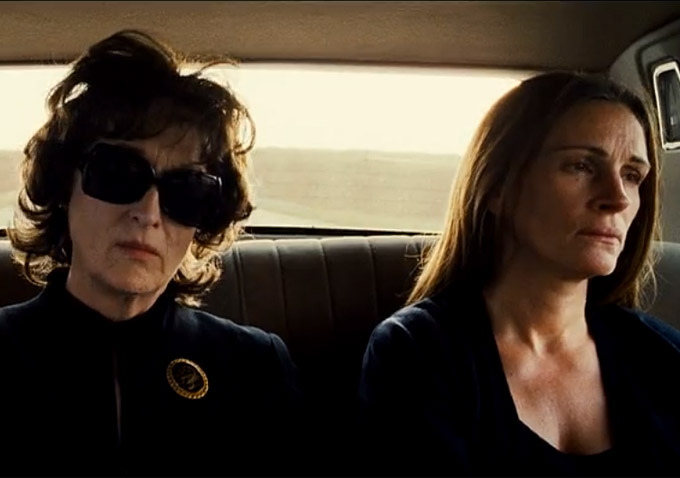 ‘Tis the season for going to the movies as an extremely crowded marketplace battled it out for  holiday box office dollars. Two notable specialty films made their debuts in the mix of that, with The Weinstein Company opening their star-studded “August: Osage County” on December 27th and Sony Pictures Classics’ offering up Charles Dickens biopic “The Invisible Woman” two days earlier.

“August” — which was delayed twice by the Weinsteins — grossed a $179,475 from 5 theaters for a  per-theater-average of $35,895. The Tracy Letts adaptation features an ensemble that includes Meryl Streep, Julia Roberts, Chris Cooper, Benedict Cumberbatch, Juliette Lewis, Margo Martindale, Dermot Mulroney and Ewan McGregor (Streep and Roberts have both received Golden Globe and SAG nominations for their parts). Given the pedigree, an even higher average certainly seemed possible, though its expansion in the coming weeks will be the film’s true test, and a $35,000+ average is certainly respectable.

“The Invisible Woman,” meanwhile, stars Ralph Fiennes (who also directed), Felicity Jones and Kristin Scott Thomas. It opened in 3 theaters, grossing $37,149 over the weekend for a $12,383 average. That gave it a total of $58,265 since opening Wednesday.

In its fifth weekend, Justin
Chadwick’s biopic of the late Nelson Mandela “Mandela: Long Walk To
Freedom” finally expanded after 4 weeks on 4 screens. It went semi-wide to 975 theaters and the result was a very reasonable $2,422,000 gross, averaging $2,484. The
Weinstein Company release has now taken in $4,731,000.

The
Weinsteins’ six week old “Philomena” dropped from 738 to 727 theaters but still jumped 51%. The film — which stars Golden
Globes nominees Judi Dench and Steve Coogan in the real
life story of a woman searching for the son that was taken from
her decades earlier — grossed $1,829,000 to total an impressive $16,506,000.

Seven week old “Nebraska,” which
similarly follows intergenerational
lead characters on a road trip of discovery, also jumped despite losing screenings.   The film — starring
Bruce Dern and Will Forte — dropped 60 theaters to 250, but rose 38% as it took in $800,000 for a $3,200 average. The $12
million-budgeted, Alexander
Payne-directed film has now grossed  $5,774,000.

The film —
released via Paramount Vantage — has been garnering Oscar buzz for
Dern’s performance since Cannes, where he won the best actor prize.
Likely among Bruce Dern’s
main competition for the best actor Oscar (and all fellow nominees for Golden Globes), Matthew McConaughey and
Chiwetel Ejioferl saw their films — out for 8 and 11 weeks, respectively — try and hold on in a crowded specialty
market this weekend as well.

The film
stars McConaughey as Ron Woodroof, a
homophobic drug addict who was diagnosed with HIV in 1986 Dallas, Texas
and is given 30 days to live.  To save his life and the lives of others,
he smuggles anti-viral medications into Dallas from all over the world,
selling them through the “Dallas Buyers Club” to work around legalities
(with the help of a trans woman played by Jared Leto, who seems like the frontrunner for a best supporting actor Oscar).