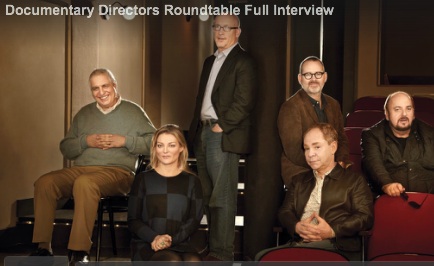 Each documentarian explored the truths of documentary shooting. Many overlook the fact that documentary storytelling is different than storytelling consisting of scripts that directors can follow from the beginning until the ending of the filming process. All six documentary directors explained what lies at the core of their respective documentary.

For more on the innovative documentarians of today, visit The Hollywood Reporter here.

Read More: For the Year’s Best Documentaries, It All Began with the Casting

Read some of the highlights from the round table discussion below:

“It (‘The Armstrong Lie’) started out as a comeback story…it went from ‘Breaking Away’ to ‘Breaking Bad’ so I had to follow that curve and in a way it became a peculiar process of actually re-investigating my own first film which had been finished, virtually, and going back in and sort of re-examining would I’d already had in a completely new way.” –Alex Gibney

“I was stunned at how easy it was to get these iconic figures- Scorsese, Coppola, Bertolucci, Polanski, Ryan Gosling, to trust that I was going to make them look- not good, but look like who they are, which was my goal really to the extent that those portraits are fundamental to the film, and even though I was friendly with a few of them-Ryan Gosling- I had never met and he opened up more than anybody and in a very self-deprecatory way.” — James Toback

“We just followed him, that’s one of the weird things about it (‘Tim’s Vermeer’), I mean you literally are really watching paint dry in this film and it turns out that watching paint dry, watching a work of art from beginning to end, watching it be made is something you never do. You know, you get documentaries, you get all these sparky moments, but this was really a situation where we’re taking somebody through an artistic process.” — Teller